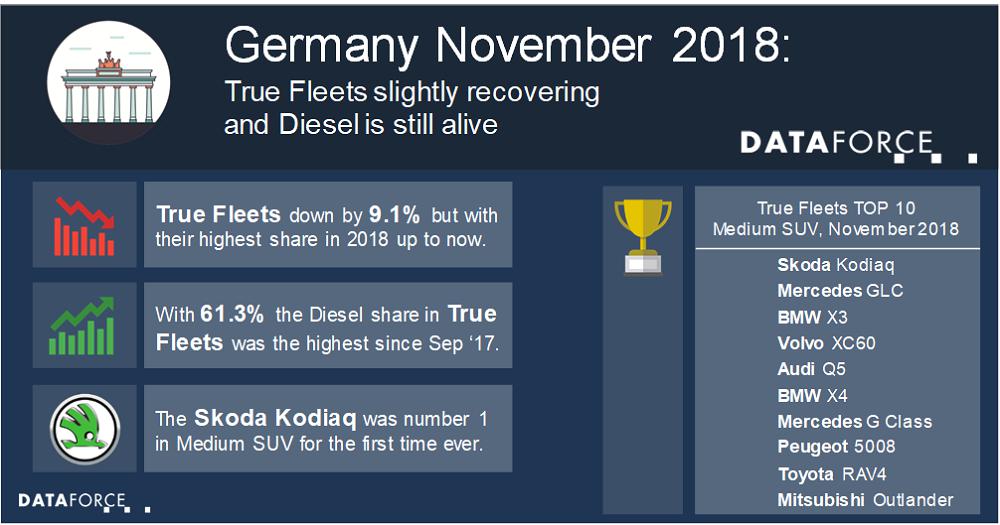 Less than 273,000 new passenger car registrations or a drop of 9.9%; November was certainly a tough month for Germany. The hardest hit, channel wise, were the Private buyers with 16.1%, but you must keep in mind that November 2017 was extraordinarily strong. Registrations of Dealerships, Manufacturers and Short -Term Rentals were down by 4.3%. However, if you look at the year-to-date figures for the first eleven months of 2018 the registrations on these so-called Special Channels are almost spot on with a fractional increase of only 0.03%. Calling this a stable result would be an understatement. No reason to get ecstatic but with - 9.1% True Fleets are at least in better shape than in September and October and due to the relatively weak performance of the Private Market the share of company cars climbed to 26.3% which is the highest for the current year, up to now.Brand performance In the top ten ranking there was an equal share of wins and losses. Five brands were able to increase their volume and five were lagging behind. Market leader Volkswagen returned to growth (+ 1.3%) followed by BMW and Mercedes. Thanks to a solid + 5.1% Škoda jumped from rank number six into fourth position. Opel on rank number six (behind Ford) had a very strong November with + 18.6% and its highest November volume since 2007. The very positive result for the brand from Rüsselsheim – for this month there was no other brand with a higher growth by absolute figures – was mainly driven by the models Astra, Grandland X, Adam and Insignia.Audi dropped back to seventh position followed by SEAT, Renault and Volvo. The Swedish Manufacturer achieved a remarkable + 46.2% which led to a market share of 2.83% which is just marginally behind Volvo’s all-time record share of 2,84% back in January 2005! The biggest support came from two SUV models; the XC60 (delivering a truly impressive + 65.1%) and the all-new XC40.Segment performance The general trend continues: while SUV keeps on growing, all six Passenger Car subsegments are down, especially the PC Medium segment. Currently in decline having lost 21.5% over November 2017 leaving its share at the lowest ever for this group of cars of 15.5%. Medium-sized SUVs however increased their slice of the market and November brought us a new segment leader: the Škoda Kodiaq was number one for the first time and scored both its best monthly volume (a 4-digit number for the very first time) and market share, outperforming very established competitors like Mercedes GLC, BMW X3 or Audi Q5.Fuel type performance Diesel is still alive! Despite the unfavourable press its registrations were once again increasing as 61.3% of all new company cars registered in November were equipped with a Diesel powertrain. That’s the highest percentage seen in more than a year (September 2017 to be precise). And it seems the larger the fleet is, the higher its appetite for Diesel goes. While the share is slightly under 50 percent in companies with up to nine passenger cars in their car parc, it is 59.4% in the fleet size 10 to 49 and even 68.7% in larger fleets with at least 50 cars (all figures 2018 YTD November). Eight out of the top 10 models in November had a Diesel share above 70%; only the Volkswagen models Golf (due to a significant amount of Electric E-Golf) and Polo were below this level. Deal’s being done or the realisation that Diesel is not in fact as bad as some would have you believe? (604 words; 3,517 characters)DATAFORCE – Focus on Fleets Dataforce is the leading provider of fleet market data and automotive intelligence solutions in Europe. In addition, the company also provides detailed information on sales opportunities for the automotive industry, together with a wide portfolio of information based on primary market research and consulting services. The company is based in Frankfurt, Germany.Michael Gergen Dataforce Verlagsgesellschaft für Business Informationen mbH Hamburger Allee 14 60486 Frankfurt am Main GermanyPhone: +49 69 95930-231 Fax: +49 69 95930-333 Email: michael.gergen@dataforce.de www.dataforce.de

You can edit or delete your press release Germany: True Fleets recovering slightly and Diesel still has a heartbeat here

09-09-2016 | Business, Economy, Finances, B …
Roadsky Traffic Safety
Roadsky Business Trip Plan in November
Roadsky Traffic Safety, the leading traffic safety devices brand, recently launches business trip plan in November. In order to research the global market of traffic management, safety and parking industry, as well as communicate with customers. Roadsky decide to have a visit to Middle East and South America this November. Mr. Johnson, the general manager of Roadsky, will start the trip from Sri Lanka. He will visit Roadsky customers to discuss
10-24-2014 | Health & Medicine
aycan Digitalsysteme GmbH
Meet aycan at Medica 2014 in November
aycan is going to present its print, post-processing and teleradiology DICOM PACS- solutions at the Medica exhibition 2014. The world’s largest medical exhibition, the Medica, will be held from 12th until 15th November in Düsseldorf, Germany. A combination of exhibition, conferences and forums, attract each year numerous visitors from all over the world to the exhibition. aycan Digitalsysteme GmbH, a PACS provider from Würzburg in Germany, will present its multi-modality post-processing workstation
11-02-2010 | Business, Economy, Finances, B …
biztradeshows
BizTradeShows releases the November -Top 100 Events
BizTradeShows.com, world's No.1 Online trade shows promotion portal have released the list of the BTS Top 100 Events for the month of November. This section has been specially designed to help the visitors & exhibitors to analyse the important events running across the world. November 1, 2010 - The most interesting section, recently introduced by BizTradeShows.com has made its place in the most viewed sections by the web surfers. This section
10-22-2010 | Business, Economy, Finances, B …
Business901
Business901 announces November Training Programs
Value Stream Marketing, Marketing your Black Belt and more. Mississippi, USA - October 22, 2010 -- Business901 announces their November Training Programs. The schedule includes three 28 day programs and their 90 day - Achieving Expert Status. The 28 day programs are: 1. Marketing your Black Belt 2. Get Clients NOW! 3. Value Stream Marketing Marketing your Black Belt(http://business901.com/expert-status/marketing-your-black-belt/)is a 28-day program starting November 5th. Marketing your Black Belt is based specifically on
12-03-2007 | Logistics & Transport
Analytiqa
Analytiqa: Logistics Bulletin: Friday 30th November
This week’s Logistics Bulletin reports on further M&A activity across the logistics and express sectors with developments in South Korea, India, Brazil and the UK. In India, UPS Jetair Express announced a strategic alliance with AFL that will significantly expand accessibility to UPS services in the country, while providing export capabilities to AFL. Also this week, trading updates in the form of quarterly or interim results have been posted by
11-06-2007 | Leisure, Entertainment, Miscel …
Merchants Cafe/ SHMPR
NYC Downtown for Dinner- November 12-18
Merchants Cafe is pleased to announce its participation in the 2007 Downtown for Dinner Campaign presented by the Downtown Alliance of New York City. Downtown for Dinner features 43 restaurants in the Financial District offering a three-course prix fixe dinners ranging in price from $25-$35 dollars November 12-18, 2007. Merchants New York Café is the first of its kind in the Merchants family – designed in European Bistro style with
Comments about openPR
We publish our press releases on openPR.de because we like people who are "open" - just like us.
Frank Obels, CEO, INCONET - Informationssysteme, Communication und Netzwerkberatung GmbH