Spanish True Fleets: Alternative fuel types on the rise while Diesel share is weaker than ever before 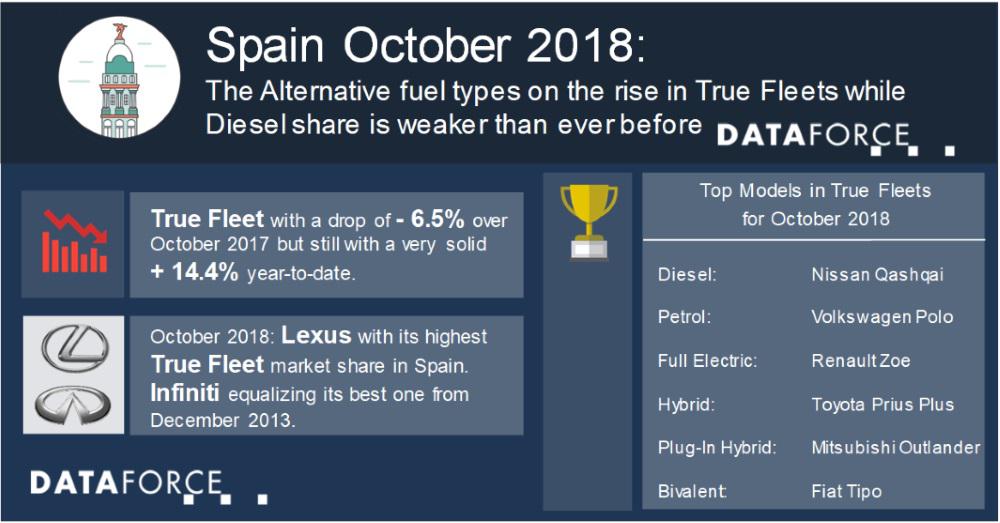 Following a serious drop of -17.1% in September the passenger car market in Spain was down by “only” -6.8% in October and scored 92,000 new registrations. With -3.2% the registrations on Private households were in slightly better shape than company cars, as the True Fleet volume was down by -6.5% compared to October 2017. Looking on the year-to-date figures it’s the other way around: the increase of True Fleets is more than double as high as in the Private Market (+14.4% vs. +7.0%). Supported by a strong +11.8% for registrations on Dealerships/Manufacturer and Short-Term Rental companies the total passenger car market is up by +9.9% for January-October 2018.Brand performance Volkswagen took back the crown from Peugeot who was number one in September. Especially the Polo (VW’s top-seller in fleet for October!) had a very strong month with +494.3% and led the Small Passenger Car segment for the first time since January 2012. Toyota and BMW on rank number 3 and 4 both made a huge jump. With +24.0% Toyota gained five positions in the ranking; BMW even jumped from 12th into 4th, thanks to a remarkable +42.8%. Ranking all BMW models descending by their absolute volume growth in October you find the X1 on pole position followed by X2, X3 and X4. Obviously, the SUV line-up is currently in great demand and represented 58.7% of all fleet registrations of the manufacturer from Bavaria in this month. The performance of the X1 was especially impressive and BMW’s smallest SUV ranked second behind Nissan’s Qashqai in the SUV Compact segment. Talking of Nissan: the Japanese manufacturer, ranked 8th behind Renault, Mercedes and SEAT, was the only brand between 5th and 12th with a plus (+7.1%). A bit further down the ranking two Premium brands showed interesting results. Lexus achieved its highest market share in Spain up to now and Infiniti equalized its best one from December 2013. Lexus’s No. 1 model, the NX more than doubled its volume over October last year. It ranked 4th in the SUV Medium segment behind Mercedes GLC, Volvo XC60 and Toyota RAV4, thus outperforming a serious amount of very established competitors. Further support came from the Lexus IS which even scored a growth rate of +217.6%. Regarding Infiniti, the growth came almost completely from the QX30 which achieved a new monthly record in Spain.Fuel type performance Our analysis by fuel types led to several premiers: with only 58.2% of all new registered company cars the Diesel share fell below 60% for the first time ever in the Spanish fleet market. The Alternative powertrains were especially able to benefit from this trend and consequently we saw new records for both Full Electric Cars and Bivalent engines (CNG/Petrol and LPG/Petrol) while the Hybrid share (9.3%) was at its second highest. Wondering about the top models within Alternative powertrains? Renault Zoe led the EV model ranking in October, the Fiat Tipo clearly dominated the group of bivalent cars and the Toyota Prius Plus and the Mitsubishi Outlander were the most preferred Hybrid and Plug-In Hybrid models respectively.(523 words; 3,098 characters)Publication by indication of source (DATAFORCE) and author (as listed below) onlyDATAFORCE – Focus on Fleets Dataforce is the leading provider of fleet market data and automotive intelligence solutions in Europe. In addition, the company also provides detailed information on sales opportunities for the automotive industry, together with a wide portfolio of information based on primary market research and consulting services. The company is based in Frankfurt, Germany.Gabriel Juhas Dataforce Verlagsgesellschaft für Business Informationen mbH Hamburger Allee 14 60486 Frankfurt am Main GermanyPhone: +49 69 95930-250 Fax: +49 69 95930-333 Email: gabriel.juhas@dataforce.de www.dataforce.de

You can edit or delete your press release Spanish True Fleets: Alternative fuel types on the rise while Diesel share is weaker than ever before here

10-09-2017 | Arts & Culture
Adelphi University
WindSync at Adelphi University on October 20
WindSync is a fresh and energetic wind quintet internationally recognized for dramatic and engaging interpretations of classical music. WindSync will perform on Friday, October 20 at 7:30 p.m. on the Westermann Stage, Concert Hall in the Adelphi University Performing Arts Center (PAC), 1 South Ave, Garden City, New York. Hailed by the Houston Chronicle as “revolutionary chamber musicians,” Gold Medalist in the National Fischoff Chamber Music Competition and winner of
10-10-2012 | Energy & Environment
rational motion
October Trade Show Triathlon
A high-intensity program of three events for rational motion and TM4 in Germany. Cologne, October 9, 2012 October is marathon month for rational motion and partner enterprise TM4. With three events following close on one another, the two companies are on tour for electric powertrains and vehicle integration throughout the month. The grand finale will be a joint booth at the eCarTec in Munich. Though the three events differ greatly, they all
10-14-2010 | IT, New Media & Software
Talentpool Solutions
October brings growth to the MeinSchreibservice.de team
Cape Town, 12 October 2010 – The beginning of October has lead to us welcoming two new colleagues to our team at MeinSchreibservice.de. MeinSchreibservice.de offers transcriptions, proof reading, editing, and translations as well as data capture, copywriting and any kind of typing work, not only for clients from Germany, but also globally. The company is constantly growing and always looking for new reliable and experienced translators, editors, proofreaders and copywriters to
10-12-2010 | Politics, Law & Society
NASGA - National Association to STOP Guardian Abuse
Florida: October is "Guardianship Month"
Florida Governor Charlie Crist has declared October as “Guardianship Month.” NASGA would point Governor Crist’s attention to the fact that the original intent of guardianship/conservatorship law - “guard,” “protect” and “conserve” - is no longer being complied with in a frightening and growing number of cases involving court-appointed fiduciaries. Wards' estates, instead of being conserved, are being plundered in the guise of fiduciary fee billings for "services," either not
09-26-2008 | Business, Economy, Finances, B …
PerTOOLS
Free PerTOOLS Licenses Throughout October
Today in London, PerTOOLS, the provider of Time Series Analysis and Data Extractor tools announced that they will be giving away free licenses of their products. This offer coincides with the company’s second anniversary which is at the end of October. Paul Darvell, Operations Director of PerTOOLS stated "Our primary focus has always been to enable people to use our tools. That is why we have always offered
10-31-2007 | Industry, Real Estate & Constr …
steelbay
steelbay grows 46% in October
The user community of the online steel marketplace steelbay has grown 46% in a single month. Steel traders around the world honor steelbay’s radically simple concept, making it’s user community grow 46% in October, after 38% in September and 39% in August. Since the launch of the site in May this year steelbay publishes steel products for sale from producers around the globe. New offers are distributed to the users by email,
Comments about openPR
Your portal is fast, simple, and easy to use. Others may have more functions but they also demand more editing time, you have to preformat the text in order to achieve a good result etc. I think openPR is really fantastic!
Andreas Knepper, wallmedien AG