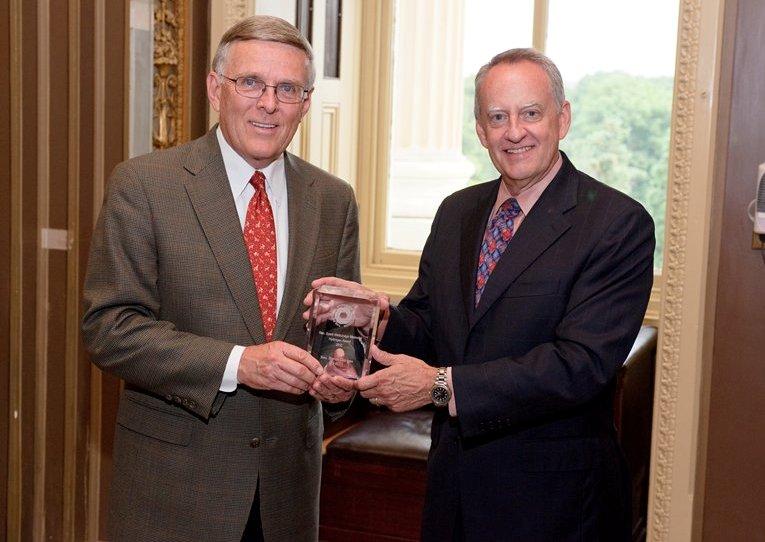 WASHINGTON, D.C. - The National Hydrogen Association presented Senator Byron Dorgan (D-ND) with the Spark Matsunaga Memorial Hydrogen Award Thursday in recognition of his long history of leadership in Congress to advance America’s hydrogen and fuel cell technologies. The other 2010 recipients are Senator Daniel Akaka (D-HI) and California Governor Arnold Schwarzenegger.“Hydrogen energy technology will help drive America's energy future and reduce our dependence on foreign oil," Senator Dorgan said. "I've long been a supporter of boosting the use of hydrogen energy in our country, and I've worked to increase funding for hydrogen research and development. In fact, I helped to create the first-ever national Center for Hydrogen Technology located at the University of North Dakota.”“For many years Senator Dorgan has been a tireless champion for hydrogen and fuel cells, working to advance the legislation and appropriations necessary to bring these important clean energy technologies significantly closer to commercialization,” said Jeffrey Serfass, President of the National Hydrogen Association. “As the popularity of hydrogen has waxed and waned, Senator Dorgan’s steady support has ensured that the technologies have improved by leaps and bounds. Many rapid R&D achievements recorded by the U.S. Department of Energy and industry are a direct result of Senator Dorgan’s vision, leadership, and commitment.” Senator Dorgan is a founding Co-Chair of the Senate Hydrogen and Fuel Cell Caucus, and had an integral role in advancing hydrogen and fuel cell provisions in the Energy Policy Act of 2005, the Energy Independence and Security Act of 2007, and the American Recovery and Reinvestment Act of 2009.The National Hydrogen Association, founded in 1989, is a membership organization composed of university, research, and business members. Its mission is to foster the development of hydrogen technologies and their utilization in industrial, commercial, and consumer applications and promote the role of hydrogen in the energy field. http://www.hydrogenassociation.orgNational Hydrogen Association 1211 Connecticut Ave., NW, Ste 600 Washington, DC 20036