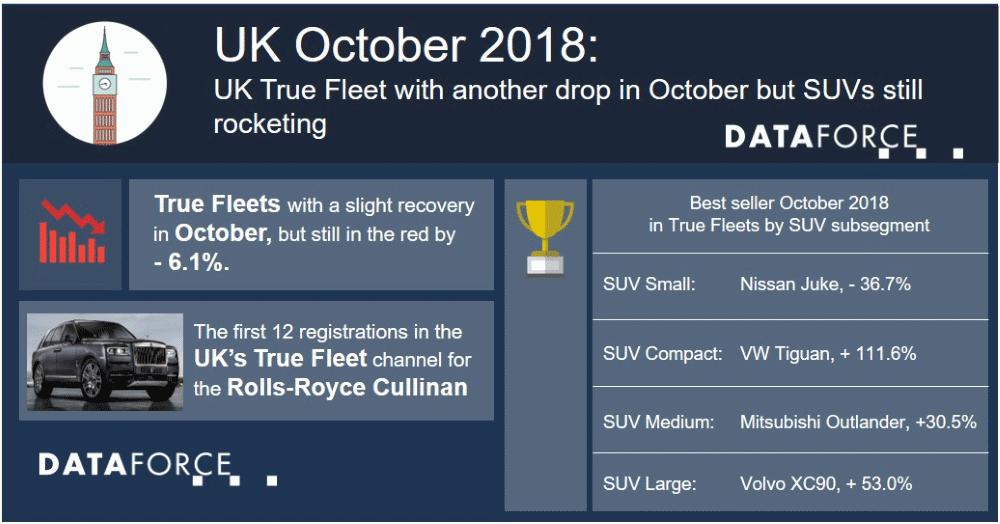 Following a massive drop of 20.5% (“thanks” to WLTP) the passenger car market in UK was down by “only” 2.9% in October and scored 153,600 new registrations. With - 6.1% the True Fleet channel was hit harder than private customers which were only 1.0% behind the volume of October 2017. With only 9 units (!) less than in last year’s October, Special Channels were extraordinary stable. But only on the first look because the registrations on Dealerships/Manufacturers decreased by more than 1,200 cars and this was almost completely compensated by the rise in registrations of Short-Term Rentals, where we could see several brands with triple-digit growth rates.Brand performance Within the top 10 fleet brands there was quite a lot of action and so only one brand kept its position in the ranking (Kia on rank number 9). Following a tough September Volkswagen was able to take the crown for True Fleet again in October. But it was a close race as Volkswagen, Ford and Mercedes were only separated by 86 registrations! With a + 31.5% BMW in fourth place achieved the biggest percentage growth within the top 10. The positive result was mainly fuelled by the 5 Series (especially the Plug-In version 530e) and the 2 Series Gran Tourer, which scored its best market share in the British fleet market up to now.Toyota in 6th just behind Vauxhall (Opel) achieved a + 21.1% and Peugeot followed in 8th behind Nissan registered a solid + 27.9% in October. For both brands the upswing was predominantly generated by SUV models (C-HR, RAV4 and 2008, 3008 and 5008 respectively). Hyundai took the last spot of the top 10 and a bit further down the ranking Volvo showed a remarkable performance. The Swedish car manufacturer achieved its highest market share for four years jumping from rank number 17 into 14th place with an impressive + 62.0%. Both the XC60 and the S90 more than doubled their registrations, while the all-new XC40 also contributed significantly.Vehicle segment performance The rise of SUVs is of course not a news anymore. Nevertheless, it is amazing to see how strong the demand is continuing to develop. And this is completely independent from the size of models. This becomes obvious by looking on the market shares of the different SUV subsegments. Small, Compact and Medium SUVs all achieved new all-time records in October and with 2.52% the group of Large SUVs was very, very close to achieving the same. But this award still goes to March 2017 with 2.54%.Let’s have a closer look at these segments. The two top-sellers within SUV Small, Nissan Juke and Vauxhall Mokka, were both in the red but all other models in the top 10 raised their volumes or were new entries like the T-Roc from Volkswagen (already 3rd in October) or the Seat Arona (10th). The Volkswagen Tiguan was clearly leading the Compact SUV class and more than doubled its registrations over October 2017. The same holds true for the Mercedes GLA, ranking third behind the Nissan Qashqai while the Grandland X from Vauxhall is currently the most successful new entry both in the current month and year-to-date.The Medium SUV segment was led by a Japanese model: the Mitsubishi Outlander and its preferred powertrain is clearly the PHEV. Eight out of ten company car drivers opted for the Plug In version. Mercedes GLC (2nd, + 82.0%) and Volvo XC60 (3rd, + 103.4%) had a massive jump but the Peugeot 5008 even had a five-digit growth rate and gained no less than 19 positions pushing the first domestic model, the Land Rover Discovery Sport aside.DATAFORCE – Focus on Fleets Dataforce is the leading provider of fleet market data and automotive intelligence solutions in Europe. In addition, the company also provides detailed information on sales opportunities for the automotive industry, together with a wide portfolio of information based on primary market research and consulting services. The company is based in Frankfurt, Germany.Michael Gergen Dataforce Verlagsgesellschaft für Business Informationen mbH Hamburger Allee 14 60486 Frankfurt am Main GermanyPhone: +49 69 95930-231 Fax: +49 69 95930-333 Email: michael.gergen@dataforce.de www.dataforce.de

10-09-2017 | Arts & Culture
Adelphi University
WindSync at Adelphi University on October 20
WindSync is a fresh and energetic wind quintet internationally recognized for dramatic and engaging interpretations of classical music. WindSync will perform on Friday, October 20 at 7:30 p.m. on the Westermann Stage, Concert Hall in the Adelphi University Performing Arts Center (PAC), 1 South Ave, Garden City, New York. Hailed by the Houston Chronicle as “revolutionary chamber musicians,” Gold Medalist in the National Fischoff Chamber Music Competition and winner of
10-10-2012 | Energy & Environment
rational motion
October Trade Show Triathlon
A high-intensity program of three events for rational motion and TM4 in Germany. Cologne, October 9, 2012 October is marathon month for rational motion and partner enterprise TM4. With three events following close on one another, the two companies are on tour for electric powertrains and vehicle integration throughout the month. The grand finale will be a joint booth at the eCarTec in Munich. Though the three events differ greatly, they all
10-14-2010 | IT, New Media & Software
Talentpool Solutions
October brings growth to the MeinSchreibservice.de team
Cape Town, 12 October 2010 – The beginning of October has lead to us welcoming two new colleagues to our team at MeinSchreibservice.de. MeinSchreibservice.de offers transcriptions, proof reading, editing, and translations as well as data capture, copywriting and any kind of typing work, not only for clients from Germany, but also globally. The company is constantly growing and always looking for new reliable and experienced translators, editors, proofreaders and copywriters to
10-12-2010 | Politics, Law & Society
NASGA - National Association to STOP Guardian Abuse
Florida: October is "Guardianship Month"
Florida Governor Charlie Crist has declared October as “Guardianship Month.” NASGA would point Governor Crist’s attention to the fact that the original intent of guardianship/conservatorship law - “guard,” “protect” and “conserve” - is no longer being complied with in a frightening and growing number of cases involving court-appointed fiduciaries. Wards' estates, instead of being conserved, are being plundered in the guise of fiduciary fee billings for "services," either not
09-26-2008 | Business, Economy, Finances, B …
PerTOOLS
Free PerTOOLS Licenses Throughout October
Today in London, PerTOOLS, the provider of Time Series Analysis and Data Extractor tools announced that they will be giving away free licenses of their products. This offer coincides with the company’s second anniversary which is at the end of October. Paul Darvell, Operations Director of PerTOOLS stated "Our primary focus has always been to enable people to use our tools. That is why we have always offered
10-31-2007 | Industry, Real Estate & Constr …
steelbay
steelbay grows 46% in October
The user community of the online steel marketplace steelbay has grown 46% in a single month. Steel traders around the world honor steelbay’s radically simple concept, making it’s user community grow 46% in October, after 38% in September and 39% in August. Since the launch of the site in May this year steelbay publishes steel products for sale from producers around the globe. New offers are distributed to the users by email,
Comments about openPR
We publish our press releases on openPR.de because we like people who are "open" - just like us.
Frank Obels, CEO, INCONET - Informationssysteme, Communication und Netzwerkberatung GmbH