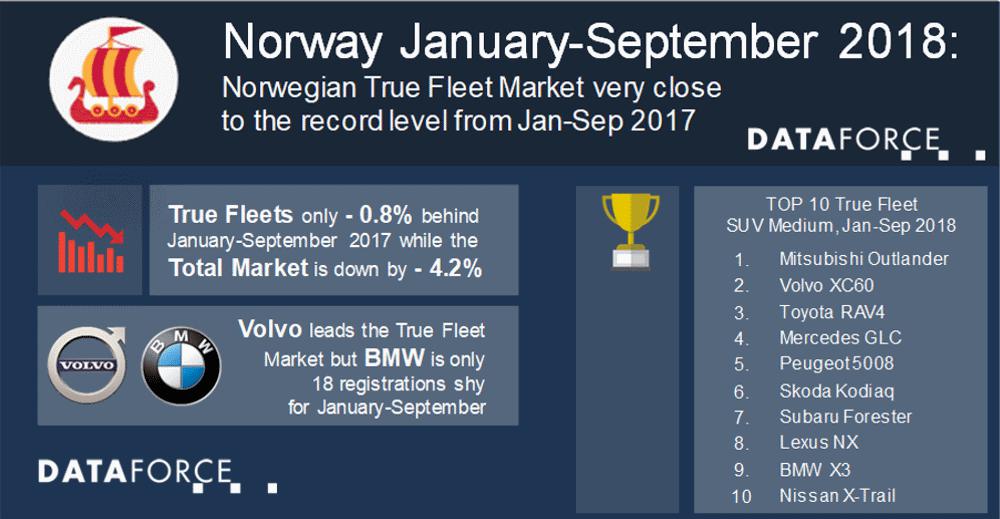 For the analysis of September new car registrations, we wanted to take a closer look at one of the markets outside the well-known EU-5 region. Our choice fell on one of the Scandinavian countries: Norway. 2017 was the best year so far for the Norwegian car market and 2018 is not very far behind this record level with a drop of only 4.2% year-to-date. And while the Private registrations fell by 8.3%, True Fleets were only a little less than 400 registrations short from January until September 2017 (- 0.8%). The volume for Short-Term Rentals was extraordinary stable with only 9 units less when compared to the first nine months of the previous year.Beside Sweden Norway is the only country where the top 10 ranking for True Fleets is led by Volvo. With a more than solid + 17.1% the manufacturer from Gothenburg gained three positions followed by BMW, Toyota, Volkswagen and Mercedes. However, the biggest volume increase within even the top 20 brands was achieved by Nissan (6th, + 34.7%). This push was mainly caused by the Leaf with additional support from the SUV X-Trail and the passenger car versions of the utilities NV200 and NV300 respectively. Ford and Škoda on ranks number 7 and 8 both lost one position while Mitsubishi had a very positive year so far (+ 13.3% thanks to the Outlander and the all new Eclipse Cross) and took the last spot in the top 10 behind Peugeot.Norway is certainly a very interesting fleet market. Did you know that the share of the SUV Medium segment there is the highest across the whole of Europe? Almost 15% of all company cars belong to this group with the models Mitsubishi Outlander, Volvo XC60 and Toyota RAV4 on the podium. And obviously a lot of manufacturers were able to participate in this positive trend as we saw ten different OEMs in the top 10 models!But beside the appetite for SUV, Norway is also known for its exceptional fuel type mix. For January until September the share of the alternative fuels accounted to 51.3%. That is no less than sevenfold the value for the EU-5 region! While CNG and LPG don’t play a role the share of Hybrids (36.0%) has become higher than the ones for Petrol (27.0%) and Diesel (21.6%). And the full EVs? Their slice of the market is now 15.4% and more than double the height seen in the Netherlands, the second strongest nation in terms of EV share in Europe. Impressive.This of course also reflects in the model ranking. For the first nine months of 2018 the full electric Nissan Leaf was number one in fleets, followed by the Mitsubishi Outlander PHEV and the Volkswagen Golf (70% thereof is a GTE or E-Golf) with the next full EV, BMW’s i3, ranking 4th overall. The models on ranks number five to ten (Volvo V90 and XC60, Toyota Yaris, Volkswagen Passat, Toyota RAV4 and Mercedes GLC) all had a Hybrid share of at least 70%, three of them even above 90%. Pretty amazing figures compared to other European countries, don’t you think?(520 words; 2,927 characters)Publication by indication of source (DATAFORCE) and author (as listed below) onlyDATAFORCE – Focus on Fleets Dataforce is the leading provider of fleet market data and automotive intelligence solutions in Europe. In addition, the company also provides detailed information on sales opportunities for the automotive industry, together with a wide portfolio of information based on primary market research and consulting services. The company is based in Frankfurt, Germany.Michael Gergen Dataforce Verlagsgesellschaft für Business Informationen mbH Hamburger Allee 14 60486 Frankfurt am Main GermanyPhone: +49 69 95930-231 Fax: +49 69 95930-333 Email: michael.gergen@dataforce.de www.dataforce.de

04-18-2017 | Tourism, Cars, Traffic
Dataforce Verlagsgesellschaft für Business Informationen mbH
True Fleet Market Germany: back to growth
After a slightly disappointing result in February (- 6.7%) the German True Fleet Market performed very well in March. The double-digit growth of 10.1% pushed the overall rate for the first quarter of 2017 to + 4.4% while the Total Market grew by 6.7% in Q1. The Top 10 ranking by brands didn’t show many changes. Despite some impressive growth rates (Opel + 56.8%, Renault + 80.9%) the positions 1-9 remained unchanged.
03-15-2017 | Tourism, Cars, Traffic
Dataforce Verlagsgesellschaft für Business Informationen mbH
True Fleet Market Germany: bigger is better
With a drop of - 6.7 per cent compared to February 2016 the True Fleet Market in Germany had a difficult second month of the year. Even if you take into account that February 2017 had one working day less than last year the result was still negative. The Total Market was also slightly negative down to a little over 243,000 registrations generating a -2.6% over its comparable figures for
02-28-2011 | Science & Education
Costa de Valencia, S.L:
The true Spanish for foreigners
A school of Spanish for foreigners offers its students extra-activities and classes: colloquial Spanish and reading clubs. Valencia. It has been proved that studying a language just in class is not enough to learn it. A Student of Spanish as a foreign language needs not only the grammar, but a full everyday immersion into the language in order to learn those expressions that can’t be found in books. It is important to
02-21-2011 | Business, Economy, Finances, B …
True Refrigeration
Refrigeration: Upright and True.
The new range of upright cabinets from True Refrigeration combines lower energy consumption, competitive pricing and the option of hydrocarbon refrigerant. The range also features a ground-breaking warranty that not only covers the whole cabinet for three years but also gives five years on the compressor. “Despite the increasing use of undercounters, uprights are still the UK’s most popular commercial cabinets in the quality refrigeration sector,” says
11-15-2010 | Business, Economy, Finances, B …
THECUBE
True Capitalism and Coworking Spaces
This recession has affected people in every sector, age group, and background, making this recession as crippling as the ‘Great Depression. The figures being reported in the US are grim with more unemployment yet to come and many people in their 50’s not being able to ever find work again. Some may see this as complete doom, however we see it as the shake-up we all needed to analyse value,
09-22-2010 | Tourism, Cars, Traffic
Theincredibleindia
Incredible India Tours – A true treat
The India tours offered by theincredibleindia.org are real great methods of exploring the country. The first and foremost character of India tours offered by theincredibleindia.org is that they brilliantly trap the vast travel potential of the country. True, India tours can be of many different natures and each one an enriching experience. Among many famous India Tours the one that is hugely popular is the golden triangle tour. It takes
Comments about openPR
OpenPR is clearly structured and remains true to its principle of confining itself to the essential parts. OpenPR has proven to be a very good and reliable partner to our media agency: Within the shortest time the releases are online and go down well with the media representatives. The success of OpenPR is reflected in the steadily increasing number of press releases. It is good that OpenPR exists!
Ursula Koslik, Director Marketing & PR, F+W Hamburg