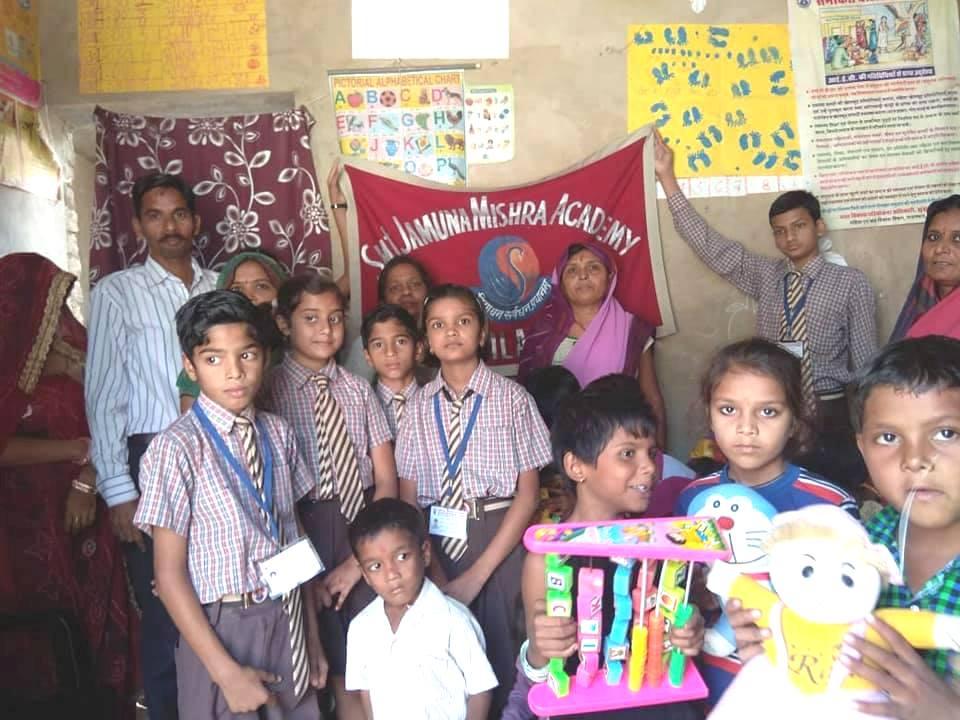 What started out as a simple idea in 2009 has now transformed as a mass movement of giving involving corporates, schools, colleges, not-for-profits, governments and communities. Participants voluntarily pledge to offer time, skills and money for social good during the Daan Utsav. The 2017 edition saw more than 6 million people from over 200 towns, cities and villages across the country celebrating the festival.Toys are vital tools that help foster the mental, physical, emotional and social development of boys and girls and develop their fantasy, thoughts and creativity. Sometime back Jhunjhunu District Collector Sri Pradeep Kumar Borad for the toy bank initiative gave a clarion call to all private schools in the district to come forward for sharing of joy through toy to the downtrodden needy children from Below Poverty Line - BPL families at anganwadis.Right from its inception, Smt Jamuna Mishra Academy – JMA which is one among the top ranking schools in Pilani has embarked on a rich tradition of not only celebrating various days of national and international significance but also various community connect initiatives such as Swachh Bharat Abhiyan, Road Safety campaign, Van Mahotsav etc for the larger task of nation building. A team of teachers and students from JMA Pilani led by Principal Mrs Booma Natarajan visited Ward No 19 and 20 Anganwadi centres on 12 Oct 2018 and distributed toys to groups of children. The toys were wholeheartedly donated by hundreds of JMA students from various classes with beaming faces and pride that they were indeed part of an institution which is a shining jewel in the crown among the schools at Pilani.Principal Mrs Booma Natarajan congratulated the team of students and teachers and assured that this is only the beginning and much more is to happen in coming times under community connect initiatives which will also involve alumni of the school.For more details about JMA Pilani see http://jmapilani.org/About JMA Pilani: Smt. Jamuna Mishra Academy (JMA) established in the year 2004 is presently one of the most sought after schools at Pilani considered as Oasis in the desert state of Rajasthan well known in India today for top ranking institutions like BITS Pilani University as well as CSIR Laboratory CEERI and globally renowned Birla Science Museum. JMA Pilani is a Co-educational English Medium School with Experienced Teachers, Spacious Classrooms and Modern Amenities designed to impart Quality Education combined with All Round Personality Development and lay the Best Foundation for the Child’s Future. While the school admits both boys and girls, the girl student enrollment has been steadily rising every year and is presently nearly 50% of the total strength. The school has boys NCC, girls band which has been winning laurels every year too. Yoga and Fine arts are not just part of school routine but a way of life for the students.Mrs Booma Natarajan, M.Sc., M.A., B.Ed. Principal, Jamuna Mishra Academy – JMA Near Old Pilani Post Office Pilani Rajasthan 333031 India Phone 91-1596-242314 Email booma_pilani at yahoo.co.in Website: http://jmapilani.org/ Facebook: https://hi-in.facebook.com/JMAPilaniRajasthanRank1/?ref=py_c

You can edit or delete your press release Joy of Giving Daan Utsav 2018: JMA Pilani Brings Smiles with Toys at Anganwadi School here