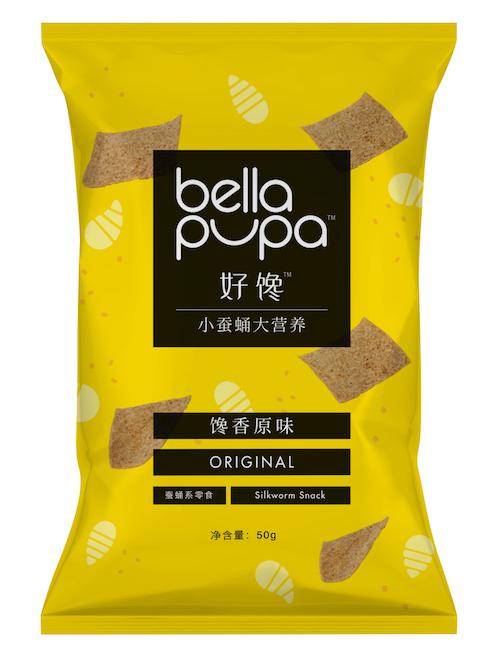 Shanghai, October 4, 2018 - The edible insect industry is growing rapidly with many new healthier and sustainable products. The makers of processed food containing bugs mostly use crickets and mealworms from farms in Canada, USA, Netherlands and Thailand. Only Bugsolutely has considered the potential of silkworms. Silkworms are a byproduct of the silk industry, and they are fed only with leaves from mulberry trees - a perfect circular economy. The 500,000 tons produced every year in China (75% of the worldwide production) are highly underutilized: mostly used as feed for animals, after the silk is reeled from the cocoon. This is despite silkworms being a superfood like crickets and mealworms. They are packed with fiber, vitamins, minerals and protein.   Bella Pupa is unique. It is the world’s first snack product containing silkworm powder (20%). And it is also the first edible insect product to be made in China. “We are really excited: after one year of R&D, we have a yummy snack with very good nutritional values. The product won the Innovative Award from the Food and Beverage Innovation Forum”, affirmed Massimo Reverberi, founder of Bugsolutely. To create the new snack, Bugsolutely engaged Mill Food Intelligence, a leading food design firm. After 48 prototypes, and a number of consumer panel tests, a surprisingly delicious snack was born. The product will initially be available in two flavors: Original and Angry Sichuan. From October 15, the product will be available in selected online and offline stores in China. The product is also available for export. "Bella Pupa caught our eyes by creating a new food category with more popular taste and fashionable design. We think insect products will become popular snacks in the future in China", commented Mote Chan, media director of FBIF (Food and Beverage Innovation Forum). Bella Pupa will initially target Shanghai but also provinces where eating insects is considered normal. The total population living in those provinces exceeds 600 million people. "The taste is really good and the market potential for this product is definitely high. It can also leverages on the fast growth of the snack category in China", declared Loris Li, Associate Director, MintelBugsolutely China (www.bugsolutely.cn/eng) is a food company specialized in edible insect products. Founded in 2017 in Shanghai by Massimo Reverberi, Bugsolutely is the first producer in the world of foods based on silkworm powder, starting with the snack Bella Pupa. Bugsolutely is also in Thailand, where it created the unique Cricket Pasta, made with 20% cricket flour (www.cricketpasta.com). For more product photos, please visit: http://www.bugsolutely.cn/photo-galleryOperative office: 3 Floor, Building 5, 436 Jumen Road, Huangpu - 200023 Shanghai - Registered address: L1, No.72, Lane 125, Yinghua Road, Malu Town, Jiading - 201801 Shanghai, China

You can edit or delete your press release Bella Pupa: the World’s First Silkworm Powder Snack Launches on the Chinese Market here

05-07-2018 | Business, Economy, Finances, B …
Bugsolutely
Seeds, chips and bugs to change the food world
May 4, 2018 – According to the most recent market survey by Meticulous Research, the edible insect market will be worth almost one billion Euro by 2023. In addition, the European Union recently started the approval process for including insect protein in food, while the US and Canada have already given the green light to use insects in packaged foods. Around the world, everything’s coming up bugs. If you are interested
03-06-2018 | Business, Economy, Finances, B …
Bugsolutely
Good Agricultural Practices (GAP) for cricket farming released for the first tim …
Bugsolutely has made a non-official translation of the document released by the Thai Ministry of Agriculture (ACFS department) containing the guidelines that Thai farmers will follow to rear crickets in a safe, optimized, standardized way. This is the first Good Agriculture Practices (GAP) standard for cricket farming in the world and the implementation in Thailand has already started. Farmers are receiving training and their activity will be verified and registered. You can download
01-23-2018 | Fashion, Lifestyle, Trends
Bugsolutely
BELLA PUPA is 2017 FBIF’s Most Innovative Food
January 20, 2018 – Bugsolutely's Bella Pupa won the 2017 FBIF’s Most Innovative Food prize. Bella Pupa was voted number one out of a selection of 54 competitors from different categories, including diary, drink, snack and instant foods like Wangwang, Master Kang, Haoxiangni and Three Squirrels. "Bella Pupa is providing us with a new idea of eating insects, which is more acceptable for the public. It caught our eyes by
04-07-2017 | Fashion, Lifestyle, Trends
Bugsolutely
EDIBLE INSECTS CRAWL ON STAGE
April 5, 2017 - Packaged foods with bugs as ingredients are a popular topic in Western countries, but now the conversation has arrived in South East Asia and even in China. In Thailand, edible insects are now on supermarket shelves. In China, some articles appeared for the first time in the media. Bugsolutely will contribute to spread the word to food professionals by promoting edible insects at food forums in