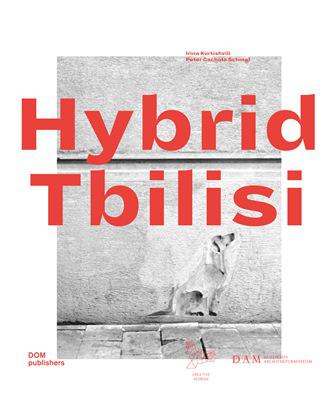 Reflections on Architecture in GeorgiaThe Caucasian metropolis of Tbilisi is in a permanent state of transformation. Spectacular new buildings contrast with late-Soviet formal experiments such as the Ministry of Highway Construction, an icon of Soviet brutalism. Meanwhile, palaces, administration buildings, and museums by European architects from the early-twentieth century are fading into oblivion, while entire streets around them are being reconstructed. Georgia’s capital appears like something of a paradox: on the one hand, it is an enormous demolition site in which the old is being torn away, but on the other, it is a factory of the new – a burgeoning, chaotic, and fascinating city in search of itself.Hybrid Tbilisi offers a wealth of images and insightful essays, taking the reader on a journey through the many layers of this contradictory metropolis that oscillates, geographically and spiritually, between Europe, Russia, Turkey, and the Arab states – between the Orient and Occident. Peter Cachola Schmal and Irina Kurtishvili, along with a number of other authors, illuminate the historical and international influences that led to the creation of this hybrid city. At the same time, they explore the various formal experiments, sometimes even failures, that directly followed political changes and the new hopes that those changes inspired. They bring to light how Georgia established itself as a successful link between the East and the West, Islam and Christianity, following the many conquests from neighbouring countries. The book describes the city’s European-style nineteenth-century buildings and works of Stalinist neo-classicism as well as the ‘kamikaze loggias’ with which the city’s residents boldly extended their prefabricated panel buildings during the chaos of the 1990s. These turbulent times were followed by a period of reconstruction and re-historicisation. Recent experiences of German architects in Georgia, in turn, are reflected in interviews with the architecture firm Graft and with the architect Jürgen Mayer H. Finally, the book is rounded off with an account of the history of housing in Tbilisi from the nineteenth century to the present day along with an introduction to the next generation of Georgian architects. The striking photographs by Berlin-based photographer Erik-Jan Ouwerkerk, among others, not only illustrate the architecture of the city, they capture the atmosphere that radiates from Tbilisi with its urbanistic overgrowth and wild night-life.Georgia is Guest of Honour at the 2018 Frankfurter Buchmesse (Frankfurt Book Fair). To mark the occasion, the Deutsches Architekturmuseum (DAM) will hold the Hybrid Tbilisi exhibition on the city’s architecture – from 29 September 2018 to 13 January 2019 – which this title accompanies. In this context, DOM publishers is also presenting two additional architectural guides: one takes the reader on a journey through Tbilisi, while the other presents artworks created specifically for architecture in Georgia.Irina Kurtishvili / Peter Cachola Schmal Hybrid Tbilisi Betrachtungen zur Architektur in Georgien – Reflections on Architecture in Georgia 225 x 280 mm, 264 pages 290 figures, hardcover EUR 38.00 ISBN 978-3-86922-288-2 German / English September 2018. DOM publishers, Berlingisela graf communications supports publishers, museums and institutions specialising in architecture, design or art, with professional press and PR work, also on an international level. Communications — Individual concepts and texts for media relations Connections — Media contacts, interview arrangements, events — anything that brings people and subjects together Corrections — Editing and copy editing of texts and specialised publications, catalogues and brochuresgisela graf communications Gisela Graf Schillerstr. 20 D 79102 Freiburg T +49 761 791 99 09 F +49 761 791 99 08 contact@gisela-graf.com www.gisela-graf.com

You can edit or delete your press release Hybrid Tbilisi here

10-09-2018 | Arts & Culture
gisela graf communications
Georgia. Art for Architecture
Soviet Modernist Mosaics from 1960 to 1990 While buildings in the style of Soviet modernism in Georgia have received global recognition for several decades, the artworks created for architecture during this period – monumental, decorative mosaics – are still waiting to be discovered and appreciated internationally. These glorious, colourful mosaics were, and still are, an independent yet inseparable part of the architecture in Georgia. They express the function of the respective
04-24-2018 | Advertising, Media Consulting, …
MarketResearchReports.biz
Georgia Telecoms, Mobile and Broadband Market - Caucasus Online, Georgia Online, …
"The Latest Research Report Georgia - Telecoms, Mobile and Broadband - Statistics and Analyses provides information on pricing, market analysis, shares, forecast, and company profiles for key industry participants. - MarketResearchReports.biz" In recent years telecommunications has become one of the fastest growing sectors in the Georgian economy, with telecom services accounting for between 5% and 7% of GDP. Mobile penetration stood at 129% in early 2018. Growth in mobile broadband has
01-26-2012 | Industry, Real Estate & Constr …
Valuation Management Group
GEORGIA BANKERS ASSOCIATION ENDORSES VALUATION MANAGEMENT GROUP
The Georgia Bankers Association (GBA), through its subsidiary, GBA Services Inc., announces the endorsement of Valuation Management Group (VMG), as its preferred vendor of appraisal management services. Founded in 2006 by President and CEO Vicky Thompson, VMG is a Georgia-based nationwide commercial and residential appraisal management company that serves Community Banks, Mortgage Bankers and Investors. “High-quality outside appraisal management services are a priority for many banks,” said Robert D. Heath, president
05-25-2011 | Advertising, Media Consulting, …
Spa and Salon Advertiser
Spa and Salon Advertiser Georgia Launched New Website for Georgia Spa and Salon …
Spa and Salon Advertiser Georgia Launched New Website for Georgia Spa and Salon Industry Georgia’s premier website for spa and salons industry, Spa and Salon Advertiser announced that it has recently launched a new website to better serve Georgia spa and salon industry. Cartersville, GA, May 24, 2011 – Spa and Salon Advertiser, Georgia's spa and salons specialized web site announced the launch of its New Site (http://www.spaandsalonadvertiser.com/ ) for the Georgia
04-08-2011 | Business, Economy, Finances, B …
TAG think
Technology Association of Georgia Launches Contractor Marketplace™
Cloud-Based Solution Transforms the Way Companies Source and Manage Contractors ATLANTA – March 29, 2011 – Technology Association of Georgia (TAG) has partnered with Georgia-based TALENThire to launch a breakthrough, cloud-based contractor marketplace solution. The TAG Contractor Marketplace will meet TAG’s goal of providing service to members who seek more efficient processes to find top talent to fuel their growth. The solution empowers businesses to easily source contract labor and to
12-30-2010 | Associations & Organizations
Center for the Advancement of Paranormal Research
Vadosta Georgia Paranormal Investigation
The Center for the Advancement of Paranormal Research is searching for the answers to the unexplained. After the launch of a brand new website and many organizational changes CAPR is better then ever. CAPR is not a group or a club in the sense that you see most of the time now. They are serious researchers that are dedicated to the scientific study of paranormal occurrences and activity. They have
Comments about openPR
Your portal is fast, simple, and easy to use. Others may have more functions but they also demand more editing time, you have to preformat the text in order to achieve a good result etc. I think openPR is really fantastic!
Andreas Knepper, wallmedien AG