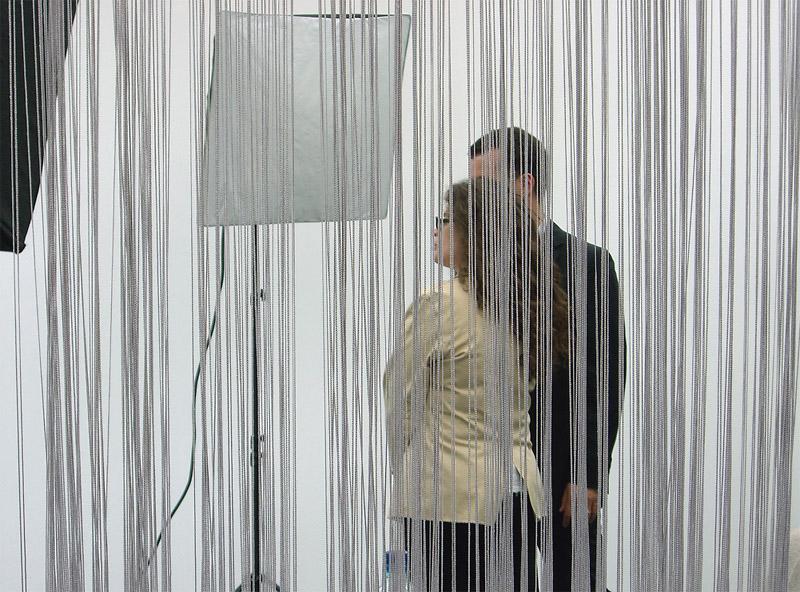 VernissageTV News, November 8, 2006 - The most recent episodes on VernissageTV (VTV) video podcast cover: >> Terence Koh at the Kunsthalle Zurich; Jannis Kounellis and Valie Export at Art Cologne, James Rosenquist at Haunch of Venison London; Carsten Höller at the Tate Modern London; Jonathan Meese at Contemporary Fine Arts Berlin; Anton Stankowski and Jan de Cock at Haus Konstruktiv Zurich; and many exciting exhibitions more.>> The international art fairs in Berlin, London, Paris, and Cologne: VernissageTV has impressions of the fairs and interviews with the (co-)directors of the art fairs Frieze London (Amanda Sharp), Scope (Alexis Hubshman), DiVA (Thierry Alet), Art Cologne (Gérard Goodrow), art.fair Cologne (Andreas E. Lohaus), Show Off Paris (Magda Danysz), Preview Berlin (Ralf Schmitt), and Art Forum Berlin (Sabrina van der Ley). The first five interviews have been realized in cooperation with Artfacts.Net (www.artfacts.net) where transcripts of the interviews are available (links to the transcripts at the end of each post). There is also an interview with the director of Artfacts.Net, Marek Claassen.>> The Designers' Saturday in Langenthal / Switzerland, Berlinomat - Platform for Design from Berlin; the Swiss Federal Design Prize 2006 at the Museum of Design Zurich; and Jean Prouvé - The poetics of the technical object at the Vitra Design Museum. There are interviews available with the director of the Vitra Design Museum, Alexander von Vegesack, and with the designers Hrafnkell Birgisson and Sebastian Summa.>> From Los Angeles VernissageTV has interviews with the artist Dinh Q. Lê (participant of the Gwangju Biennale 2006 and the 5th Asia-Pacific Triennial of Contemporary Art) at Shoshana Wayne Gallery; and with the gallery owner Joni Gordon who talks about 33 years at her Newspace Gallery in Los Angeles.>> From Mallorca there are impressions from the Art Night in Palma de Mallorca and the exhibition Bill Viola: Night Journey in Pollença.Press contact Karolina Zupan-Rupp, contact@vernissage.tv VernissageTV, Münsterberg 1, 4001 Basel / Switzerland Phone: +41 61 283 24 55 Website: www.vernissage.tvAbout VernissageTV VernissageTV (VTV) takes you to opening receptions of exhibitions and events. VernissageTV provides insight into the social side of the world of art, design and architecture. VernissageTV is talking with artists, curators and gallery owners in a relaxed style. VernissageTV is a video podcast that is widely distributed through RSS. Episodes can be viewed on computer, iPod with video functionality and TV set. VernissageTV is an open nonprofit network based in Basel, Switzerland, with correspondents worldwide. VernissageTV is offering special services for exhibition venues. Website: www.vernissage.tv , Podcast-Feed: feeds.feedburner.com/VernissageTV . VernissageTV is featured in iTunes and can easily be subscribed to via iTunes and its podcast directory or the videocast's homepage at www.vernissage.tv/ . All episodes are compatible with the iPod with video functionality. VernissageTV recommends iTunes to subscribe and watch VernissageTV but other RSS newsreaders or Video Podcast viewers like FireAnt and DTV can be used as well. Subscribe with the following address: feeds.feedburner.com/VernissageTV .

10-09-2018 | Arts & Culture
gisela graf communications
Georgia. Art for Architecture
Soviet Modernist Mosaics from 1960 to 1990 While buildings in the style of Soviet modernism in Georgia have received global recognition for several decades, the artworks created for architecture during this period – monumental, decorative mosaics – are still waiting to be discovered and appreciated internationally. These glorious, colourful mosaics were, and still are, an independent yet inseparable part of the architecture in Georgia. They express the function of the respective
01-19-2017 | Industry, Real Estate & Constr …
Climaveneta
Contemporary…and sustainable art!
Luigi Pecci Centre Mitsubishi Electric Hydronics & IT Cooling Systems, through its brand Climaveneta, supplied the air conditioning system for the rebirth of the Luigi Pecci Centre, in Florence. After 6 years of construction and being closed for 3 years, The Luigi Pecci Centre for Contemporary Art has once again reopened in Autumn 2016. It is the first institution in Italy to be built from scratch with the specific intent to exhibit,
09-11-2012 | Arts & Culture
Ogilvy Public Relations Worldwide
Art Bengaluru’s International Art Auction
Includes artworks of celebrated International artists & unique lots including sculptures, coffee tables, chairs and other collectors’ items. Bangalore, India, Friday - August 24th, 2012 -- ‘Art Bengaluru 2012’ ( http://www.artbengaluru.in ), South India’s premier festival for contemporary art and culture, presents an iconic event as a part of its celebrations – an International Art Auction ( http://www.artbengaluru.in/auction.html ). The Auction, being presented by well-known auctioneer - Angira Arya, will take
09-14-2011 | Arts & Culture
Light Space & Time Online Gallery
Photography Art Contest Announced by Art Gallery
Jupiter, Florida - September 13, 2011 -- Light Space & Time Online Art Gallery announces a Juried Art Contest with an “All Photography” theme for the Month of September 2011. All photographers from around the world are called upon to make online submissions with the winners being included in the gallery’s October 2011 online art group exhibition. Light Space & Time encourages entries from all photographers regardless of where they
11-15-2010 | Arts & Culture
Alin Media Group
Got Art?
HEY – listen up! We have some exciting news!! We’re having a CONTEST! We are looking to find one talented artist to create our T-Shirt Design. DEADLINE: December 1, 2010 – Winner announced December 31, 2010 We’re selecting 12 artists to display on our 2011 Calendar. The Top 3 Artists will be profiled with their entry on our fan page and voting will be open to everyone on Twitter and Facebook! That's right;
04-01-2008 | Arts & Culture
Asylum Gallery
Call for Mail Art
Artists from around the world are invited to send mail art* on the theme Global Warming: A Hot Time in the Old Town! Pieces should be no larger than 8” x 10” (inches) and received by May 15th. All work received will be exhibited from May 24th to June 22nd. A reception will be held on June 14th for Sacramento’s 2nd Saturday festivities, during which many galleries
Comments about openPR
OpenPR ist the nicest and most clearly laid out PR platform I have seen to this day. The press releases are displayed very nicely and clearly and without any unnecessary frills. The updates are fast and the finished release looks appealing and is clearly legible. Even with 16 years of experience one discovers new things from time to time. Congratulations!
Gabriele Ketterl, Director Marketing & PR, Menads