True Fleets in the Netherlands are fully charged, tanked up (with petrol engines) and going through the roof 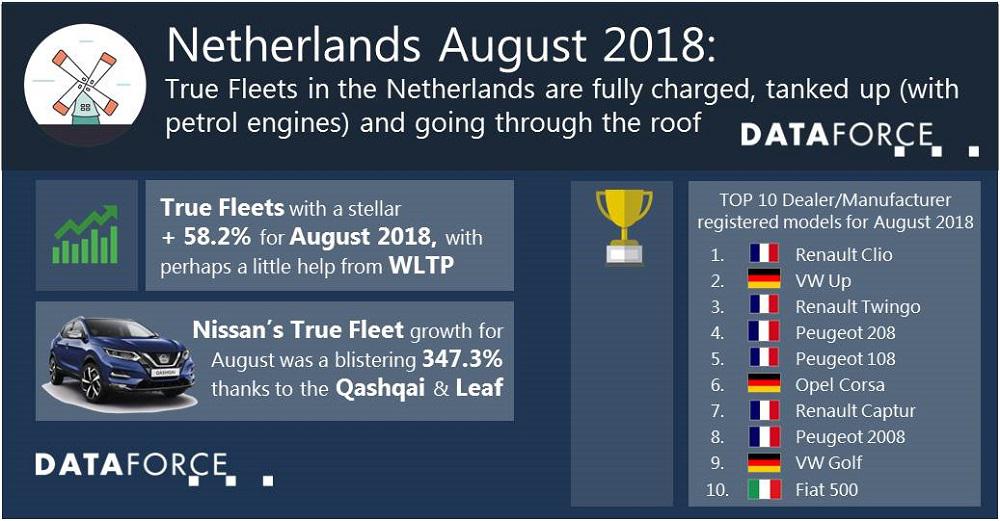 So while we keep mentioning Spain as being on a good run, the Netherlands in 2018 and specifically August is seemingly on fire. True Fleet is up by an astonishing 58.2% over August 2017 the highest fleet share since December 2016. Though the push is likely to be short lived as taxation (arriving in January 2019) surrounding WLTP is the likely driver meaning a downturn is possibly already in the post. The “tactical” Special Channels even beat out True Fleets with an increase of 86.2% and it was the Dealer/Manufacturer sub-channel driving nearly all that growth. Private registrations were also up, but in comparison to its counter parts by a more sedate 8.3%. This left the Total Market up by pretty amazing 42.2% finishing on 41,000 registrations for August which pushed the YTD (year-to-date) growth to 15.0%. Brand performance On a manufacturer level all but two of the brands inside the top 20 capitalised on the growing market with no less than four inside the top 10 achieving triple-digit growth rates. Volkswagen retained its crown as most the popular OEM and was the 1st of the triple-digit growers (+ 115.2%) while Renault in 2nd also held its place from August 2017. Audi took the 3rd spot stepping up six places from 9th with a + 123.2%. Opel was next in line followed closely by Peugeot with only 58 registrations separating them while BMW took the 6th Spot. Nissan was 7th and the highest triple-digit grower, achieving a staggering 347.3% growth as both the Qashqai and Leaf obliterated their totals from August last year. Kia was next on the ladder with a 112.0% surge and the last two rungs will filled by Škoda and Ford. Outside the top 10 noteworthy mentions should go to Tesla, up by 156.2% with both the Model S and Model X more than doubling their volume and it will certainly start to get even more interesting once Model 3 hits the showrooms.Fuel Type Performance So with diesel suffering a registration tax (BPM) supplement in the Netherlands it come as no surprise to see that any diesel popularity mostly comes from the Fleet channel where the fueltype’ s lower CO2 emissions can reduce the driver’s benefit-in kind tax bill.However despite the increasing Fleet registrations (+ 24.3% YTD), diesel continues to decrease significantly losing 6.2% YTD bringing its share of the fleet market down just 26.2%. No surprises then that petrol engine vehicles are really picking the pace, for August + 99.3%, YTD + 34.3% increasing their share to 63.6% but Alternative fuels are also not slacking with a + 70.5% for August and a + 96.8% YTD upping their share into double digits of 10.3%.We did however see some opposing effects. Looking at the Volvo V60, with the Private Market firmly behind the petrol variant where it accounts for 92.9% of all V60 registered in 2018 while in Fleet it is the opposite. Diesel accounts for 62.1% of all V60s here and this is an increase of 9.7 percentage points over last year’s figures proving that despite heavy taxation in the right channel and in the right car diesel does have it place. (529 words; 3,052 characters)DATAFORCE – Focus on Fleets Dataforce is the leading provider of fleet market data and automotive intelligence solutions in Europe. In addition, the company also provides detailed information on sales opportunities for the automotive industry, together with a wide portfolio of information based on primary market research and consulting services. The company is based in Frankfurt, Germany.Richard Worrow Dataforce Verlagsgesellschaft für Business Informationen mbH Hamburger Allee 14 60486 Frankfurt am Main GermanyPhone: +49 69 95930-253 Fax: +49 69 95930-333 Email: richard.worrow@dataforce.de www.dataforce.de

You can edit or delete your press release True Fleets in the Netherlands are fully charged, tanked up (with petrol engines) and going through the roof here