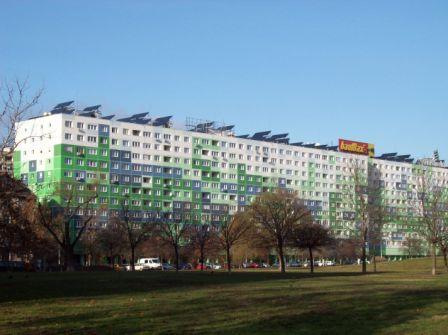 1,500 m2 of large collectors from solar specialists TiSUN were installed during the refurbishment of Hungary’s biggest municipal housing blockThe apartment building is situated on a main road in Budapest. Since its completion in 1970, huge billboards on the roof have created interest in this block of municipal housing, which is known in Hungary as the ‘Village House’ because of the living area of 43,500 m2. The energy efficiency of all 886 dwellings was improved due to good subsidies in Hungary for this type of refurbishment. New insulation was fitted and the windows were changed throughout Hungary’s biggest residential block, which has 15 stairwells and is 315 metres long. Hungary’s largest collector system, made by TiSUN, a specialist in major projects, was also fitted. The 1,500 m2 of FA large collectors from TiSUN save on energy costs and use the sun’s free, endless supply of energy efficiently to produce hot water. “The collectors are optimally aligned to the south and therefore work at their most efficient. I am extremely pleased that this large system is located in Budapest. With this project, TiSUN has proved that we are the experienced specialists for major projects in Hungary and beyond thanks to our large collectors, which are serially produced at up to 18 m2 each,” explains Balázs Szendrö, TiSUN sales manager for Hungary. The 3,000 residents of the ‘Village House’ are pleased with the environment-friendly, sustainable investment that has been made in a solar system. It was fitted on the flat roof by the TiSUN installation team using a mounting system with a 40 tilt. The residents are not used to the media hype that has been generated since mid-July thanks to Ökoplanet Kft., the professional firm of installers. A major press conference including a film team gave the residents plenty to talk about and will encourage further media interest. The energy-efficiency subsidy totalled 4.45 million Euros and was funded partly by the City of Budapest and partly by the EU Panel Plusz project. The property owners contributed 27%.For more than 20 years TiSUN has manufactured solar collectors and stratified storage tanks for the rough reality: TiSUN solar systems offer 100% independent, unlimited and free energy for heating, cooling, hot water production and process heat. All our products are designed and manufactured in Tyrol, Austria, from where we export 83 %. We are solar thermal experts and one of the innovators and market leaders, employing a team of 130 people at our HQ in Tyrol/Austria and 90 sales representatives all over Europe. Emerging markets are Central and Eastern Europe, Middle East and MAHREB.TiSUN GmbH Stockach 100 A - 6306 SöllNina Karner Press- and Media Releases nina.karner@tisun.com +43 5333 201-207

03-02-2017 | Business, Economy, Finances, B …
Stamford Global
The HR Congress Budapest
After bringing together 500 HR professionals in Amsterdam on 29-30 November 2016 and offering probably the most unique and comprehensive event program of its kind, the HR Congress will now arrive in the Hungarian capital for two content-packed days of learning and exchanging ideas. The Congress will feature a truly unique panel of global subject matter experts. The presenters are carefully selected to ensure that their content is aligned with the theme
05-04-2016 | Tourism, Cars, Traffic
Stag's Emporium
Why People Choose Budapest for Stag Do
The stag do may be even more important than the wedding. At least for men. This is a once-in-a-lifetime event, when you are lucky enough, so it’s important to find the right place to spend the stag weekend. For the ideal stag do, more and more people choose to go abroad and Budapest is one of the most popular destinations in Europe. No wonder why, Budapest is getting better every year
09-06-2013 | Business, Economy, Finances, B …
Russell Bedford International
Russell Bedford announces new correspondent firm in Budapest
Russell Bedford, the global accounting and audit network, has announced the appointment of S&M Economix Kft. as its new correspondent firm in Budapest, Hungary. S&M Economix is a well-established, family-owned audit firm. The partners have extensive experience, especially in the audit of governmental organisations, state-owned companies and private companies. Bookkeeping, payroll and tax services are provided by an associated practice, Mehesz Tax Consult Kft. ENDS About Russell Bedford International Established in 1983,
01-31-2012 | Science & Education
Software Competence Center Hagenberg
From Budapest to Hageberg
Dr. Miklos Biro (57) joined at the beginning of January the Process and Quality Engineer (PQE) team at SCCH. He holds a Ph.D. degree in mathematics (Loránd Eötvös University in Budapest), a Master of Science in Management degree (Purdue Universtiy, USA) and a Doctor Habilitatus degree /Corvinus University of Budapest). He worked as an associate professor and project director at the Dennis Gabor College in Hungary and has more than
10-26-2010 | IT, New Media & Software
ABAS Software AG
International abas ERP Seminar in Budapest
Budapest/Hungary – Companies from all over the globe gathered in Budapest, Hungary to meet mid-market companies that have successfully implemented abas ERP and gained a tremendous value for their business. abas software partners and consultants from 30 countries were also present to support customers and prospects not just technological but also organizational. abas customers presented that in today’s world of change and globalization, technological and organizational support is essential to stay
08-31-2010 | IT, New Media & Software
ABAS Software AG
ABAS: International ERP Prospect Seminar in Budapest
Karlsruhe, Germany/Budapest, Hungary – Join ABAS on October 13th 2010 in Budapest and meet CEOs and key users from international companies who have successfully implemented abas ERP in multiple countries. Participate in a “lessons learned” session focusing on budget, increased revenues and creating a global value stream for your business. Meet the ABAS Global Partner Network abas Business Software creates value for companies who deal with customers or vendors across borders. Our
Comments about openPR
I can't but agree to the positive statements about your portal: easy to use, clear layout, very good search function, and quick editing!
Jens O'Brien, Borgmeier Media Communication