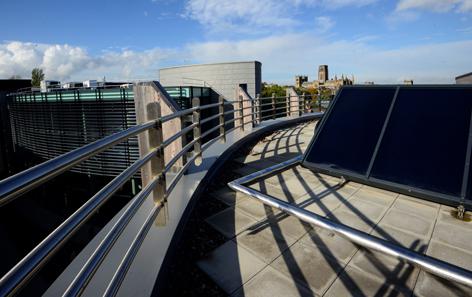 The city of Durham has always had a proud heritage of beautiful buildings that stretches back to medieval times. The city in the north-east of England boasts the 11th century Durham Castle and the breathtaking grandeur of Durham Cathedral (forming a UNESCO World Heritage site), and can now be equally proud of the new Palatine Centre at the University of Durham.Durham University was founded in 1836, is one of Britain’s top 3 universities, and is listed as one of the world’s top 100 universities. It currently has approximately 12000 students who study in the numerous historical buildings of the sprawling campus. The new Palatine Centre was built to bring together all the administrative services of the university that had previously been scattered around the city. Having the management team, academic office, communications department, IT help desk and international office under one roof will make the organization more efficient and effective.The Palatine Centre was designed with sustainability in mind, and incorporates sedum roofing, TiSUN solar thermal collectors, photovoltaic panels, air source heat pumps, solar shading and rainwater harvesting. It has been awarded a BREEAM “Excellent” rating which underlines the achievement of the environmental and sustainability ambitions. Professor Chris Higgins, Vice-Chancellor of Durham University, said: “The Palatine Centre is the centrepiece of our ambitious plan to ensure our entire built environment befits a World Top-100 University.”The staff and students who use the building which includes a cafeteria use water that has been heated by a TiSUN solar thermal system. 65 m² of TiSUN’s large-scale collectors have been installed on the roof of the Palatine centre facing directly south in order to optimise the solar gain. The collectors are different sizes, ranging from 4 metres long to 6 metres long, arranged in arrays of 4 to 12 metres in length in order to follow the semi-circular shape of the building. The collectors are mounted on 40º A-frames using TiSUN’s flat-roof solution.The heat collected is transferred to a TiSUN stratified Pro-Clean cylinder which is situated a floor below the collectors. The cylinder has a capacity of 2500 litres to cope with the high demand of the building’s occupants.The solar system was installed by the respected Stockton-on-Tees contractor Geoffrey Robinson Ltd. The Project Engineer for the Palatine Centre, Richard Corcoran, was pleased with the result: “The TiSUN large scale collectors were far easier to install than if we had used smaller, domestic-sized collectors. The reason that TiSUN was chosen as a partner on this project was not just for the products that are suited to commercial applications, but because TiSUN have the design and implementation experience with commercial projects. The Pro-Clean cylinder is unique because it offers solar stratification, which maximises solar gain, and at the same time guarantees Legionella-free domestic hot water.”The Pro-Clean stratified cylinder is implemented as a solar pre-heat for domestic hot water which then flows to gas-fired boilers to bring the temperature up to 60 ºC if required. It is anticipated that the solar system will provide 50% of the annual domestic hot water demand, providing 70% during most of the summer but on some days 100% of the domestic hot water will have been heated entirely by the solar collectors.Geoff Miller, sales director for TiSUN in the UK, is excited about the data that will come from the installation. “The TiSUN controller logs all data on the system, and stores this data for analysis. We will be able to monitor exactly what the temperatures of the various components are, and use the data to fine-tune the system parameters. It is exciting to be involved in a project as prestigious as the Durham University Palatine Centre, as it is a serious renewable building.”TiSUN has been developing, producing and selling complete systems for the utilisation of solar heating energy for over two decades. The solar systems provide 100% independent, infinitely available, free solar energy for backup heating, water heating, process heat and cooling. Known as Europe's solar heating specialist, TiSUN has an export quota of 83%. The company employs a workforce of 120 at the main location in Tyrol/Austria and 90 sales personnel in Europe. TiSUN products are available in 44 markets in the EU27 and candidate countries, Switzerland, the former CIS states, the USA, MENA and India. All serially produced solar collectors feature multiple certifications. In addition to the Solar Keymark, which is valid across Europe, and the Austria Solar Seal of Quality, quality certifications from five other countries confirm the high standard of the products. The ISO 9001:2000 Quality Management Test Certificate verifies that both product and service quality levels are especially high. Since 2010, the company has also been certified under the international environmental management standard ISO 14001.TiSUN GmbH Stockach 100 6306 Söll

09-18-2012 | Energy & Environment
TiSUN GmbH
Tyrolean sun for Arab markets
In order to serve the markets in the Middle East, the Austrian solar thermal manufacturer TiSUN founded the subsidiary TiSUN GCC FZC in Dubai at the beginning of December 2011. The first projects in the MENA-region have been successfully implemented. A major project in Abu Dhabi is equipped with solar systems “made in Austria”. "The countries on the Arabian Gulf are among the sunniest regions in the world. With nine hours
09-18-2012 | Energy & Environment
TiSUN GmbH
“We export to more than 50 markets”
TiSUN welcomes in Latvia and Albania new exclusive partners in Northern and Southern Europe The internationalization of TiSUN is strengthening the home market and increasing employment in Tyrol as well as taking Tyrolean quality to the whole world. Michael Reinshagen, the TiSUN assistant of international sales, appointed the company Profesion Klima sh.p.k as the exclusive dealer for Albania. The first large project has been achieved with the installation of a
04-23-2010 | Energy & Environment
TiSUN Gmbh
Not only the ball is round
… but also the sun’s fiery orb which delivers warmth for heating and domestic hot water with the help of TiSUN large scale solar collectors on the roof of a sports club in Upper Austria. Mr. Brunner, chairman of the local sports and gymnastics club focused on solar energy for their new building. The solar system supports the pellet boiler during winter for space heating, and during summer covers the domestic
03-15-2010 | Energy & Environment
TiSUN Gmbh
TiSUN, sea and sand
The Olira Boutique Hotel in Bodrum, Turkey, uses solar warmth to heat water for showers and baths and for the pool complex, captured by a TiSUN solar system This recently renovated hotel on the Aegean coast is particularly proud of its recreation and wellness area where it pampers its guests with a range of different water features. 56 m2 TiSUN FM-W module collectors supply solar heat to three Pro-Clean® solar stratified tanks

11-25-2020 | Business, Economy, Finances, B …
Franchise Gopher
Martorano Launches FranchiseGopher.com
FOR IMMEDIATE RELEASE PALATINE, ILLINOIS, November 24, 2020 – Serial entrepreneur Benedict Martorano announced the launch of franchisegopher.com a unique business resource website that provides Franchise Disclosure Documents on over 1000 franchises currently operating in the United States. “Franchise Disclosure Documents provide an incredible amount of information about the inner workings of a franchise.” Said Martorano, “Unfortunately they are notoriously difficult to obtain, this makes it difficult for a prospective franchisee
09-17-2020 | Industry, Real Estate & Constr …
Unique Indoor Comfort
Why Indoor Air Quality Is So Important During The Summer
Palatine, IL - USA | September 14, 2020 -- Summer is in full swing, and everyone in Chicagoland knows what that means. Hot temperatures, high humidity, lakefront trips, and nice air conditioned homes. More importantly, more people are staying indoors during the day due to the global pandemic. What many people don’t know is how the heat and high humidity can affect indoor air quality, especially in homes that are not
03-21-2019 | Business, Economy, Finances, B …
Nancy Burgess Strategic Marketing Inc
Online Agency Releases Web Writing Advice for Businesses
Palatine, IL, March 21, 2019 -- Online agency Nancy Burgess Strategic Marketing Inc. (https://nancyburgess.net/) has published an overview that details website writing and blogging best practices for 2019. Among other advice, the free article includes the importance of applying a marketing strategy and the need to write for smart technologies. Research reveals that Google and other search engines are more likely to rank longer content on the first page of search engine
01-18-2011 | IT, New Media & Software
Cristallight
Home Business Card 1.2.1 released, templates added, QR Code functionality enhanc …
Palatine, IL, US. Cristallight announced today the release of the new version of the Home Business Card, one of the most popular mac product for the business card design and printing for MacOS X. The update brings the substantial improvement of the templates included with the product, and the product functionality. QR Code functionality improved, changes in image handling, power text make the use of the product
05-16-2008 | Leisure, Entertainment, Miscel …
Loudspeakers Plus
Loudspeakers Plus Announces First Tone Clinic
May 13th, 2008, Chicago, IL – Loudspeakers Plus, partnered with Eminence Speaker LLC has announced it’s first Tone Clinic at The Tone Chamber in Manteno, IL on May 17th. The Tone Chamber is the first-ever facility offering guitar players to ability to test every Eminence guitar speaker. Guitar players can use their amp, guitar and pedal board to test 27 speakers and customize their tone. The Clinic will highlight guitar speaker
05-16-2008 | Industry, Real Estate & Constr …
Lumex, Inc.
Lumex Adds New Pink, Purple and Turquoise Colors To Its Broad Line-Up of LEDs
PALATINE, IL – Lumex is announcing the addition of three new color choices to its wide range of visible LED offerings: Pink, purple, and turquoise. Available in Lumex\'s new InspirationLEDs™, these new colors are ideal for adding impact, excitement, and product differentiation to all types of electronics equipment ranging from consumer products through even the most specialized electronic instrumentation. Potential applications include home electronics, automotive and appliance
Comments about openPR
I can't but agree to the positive statements about your portal: easy to use, clear layout, very good search function, and quick editing!
Jens O'Brien, Borgmeier Media Communication