Not only the ball is round 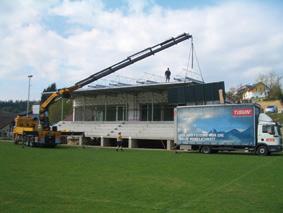 … but also the sun’s fiery orb which delivers warmth for heating and domestic hot water with the help of TiSUN large scale solar collectors on the roof of a sports club in Upper Austria.Mr. Brunner, chairman of the local sports and gymnastics club focused on solar energy for their new building. The solar system supports the pellet boiler during winter for space heating, and during summer covers the domestic hot water demand for showers and bathrooms.The four TiSUN FA large flat solar collectors with a total collector area of 36,4 m2 were mounted on the south-facing roof at an angle of 40° by the TiSUN crane installation team. The large size of the collectors allows a speedy roof mounting and quick hydraulic connections, no matter what the weather conditions are! Every collector is a single 9 m2 unit and allows large solar arrays to be implemented, even in limited roof space.Two stratified Pro-Clean® cylinders with spherical heat exchangers layer the harvested solar energy for the most efficient output. Each cylinder has a volume of 1,250 litres and stratifies without complicated technology.Mr. René Wurm of the local plumbing company that carried out the installation, explains the high performance of the solar system: “The usage profile of sports clubs is perfect. During the day the cylinders can collect the sun’s heat and in the evening, after the training sessions, they are emptied and there is the potential for them to be recharged the next day“.TiSUN has been developing, producing and selling solar collectors and solar stratified cylinders for 21 years. The solar systems provide 100% independent, infinitely available, free solar energy for heating, cooling, hot water and process heat. As a solar heating specialist, TiSUN has an export quota of 83%. Based in the Austrian Tyrol, TiSUN is an innovation and market leader with a workforce of 131 at its headquarters in Söll and 90 sales personnel in Europe. The products are available on 42 markets in EU27, the Community of Independent States (CIS), the Middle East and Maghreb (North West Africa).TiSUN GmbH Stockach 100 A - 6306 Söll +43 5333 201-0 Nina Karner

11-07-2012 | Energy & Environment
TiSUN GmbH
Durham University Leads the Way with Environmentally Efficient Building
The city of Durham has always had a proud heritage of beautiful buildings that stretches back to medieval times. The city in the north-east of England boasts the 11th century Durham Castle and the breathtaking grandeur of Durham Cathedral (forming a UNESCO World Heritage site), and can now be equally proud of the new Palatine Centre at the University of Durham. Durham University was founded in 1836, is one of Britain’s
09-18-2012 | Energy & Environment
TiSUN GmbH
Tyrolean sun for Arab markets
In order to serve the markets in the Middle East, the Austrian solar thermal manufacturer TiSUN founded the subsidiary TiSUN GCC FZC in Dubai at the beginning of December 2011. The first projects in the MENA-region have been successfully implemented. A major project in Abu Dhabi is equipped with solar systems “made in Austria”. "The countries on the Arabian Gulf are among the sunniest regions in the world. With nine hours
09-18-2012 | Energy & Environment
TiSUN GmbH
“We export to more than 50 markets”
TiSUN welcomes in Latvia and Albania new exclusive partners in Northern and Southern Europe The internationalization of TiSUN is strengthening the home market and increasing employment in Tyrol as well as taking Tyrolean quality to the whole world. Michael Reinshagen, the TiSUN assistant of international sales, appointed the company Profesion Klima sh.p.k as the exclusive dealer for Albania. The first large project has been achieved with the installation of a
03-15-2010 | Energy & Environment
TiSUN Gmbh
TiSUN, sea and sand
The Olira Boutique Hotel in Bodrum, Turkey, uses solar warmth to heat water for showers and baths and for the pool complex, captured by a TiSUN solar system This recently renovated hotel on the Aegean coast is particularly proud of its recreation and wellness area where it pampers its guests with a range of different water features. 56 m2 TiSUN FM-W module collectors supply solar heat to three Pro-Clean® solar stratified tanks

01-15-2021 | Advertising, Media Consulting, …
Ken Research Pvt Ltd
Austria Agriculture Market | Austria Agriculture Industry | Austria Agriculture …
The share of Austria agriculture within the Austrian economy declined steady afterward World War II, agriculture continues to represent a very important part of the economy attributable to its social and political significance. The Chamber of Agriculture rests on an equal level with the chambers of commerce and labour, though its members manufactures solely a fraction of the GDP that industrial and sale able labours produce. Though little, the agricultural sector is
06-08-2017 | Business, Economy, Finances, B …
ReportsWorldwide
Agrochemicals Market in Austria
ReportsWorldwide has announced the addition of a new report title Austria: Agrochemicals: Market Intelligence (2016-2021) to its growing collection of premium market research reports. The report “Austria: Agrochemicals: Market Intelligence (2016-2021)” provides market intelligence on the different market segments, based on type, active ingredient, formulation, crop, and pest. Market size and forecast (2016-2021) has been provided in terms of both, value (000 USD) and volume (000 KG) in the report. A
10-24-2016 | Science & Education
FWF - Austrian Science Fund
Nazi psychology in Austria
The history of academic psychology after the "Anschluss", the annexation of Austria by Germany in 1938, and its role as a discipline used in National Socialist policies is being examined systematically for the first time in a research project supported by the Austrian Science Fund FWF. "It is a sad fact”, says psychologist Gerhard Benetka from the Sigmund Freud University Vienna "that applied psychology flourished during the National Socialist era
09-06-2012 | Industry, Real Estate & Constr …
ESCHA Bauelemente GmbH
ESCHA Bauelemente GmbH extends position in Austria
Halver, 8 August 2012 – In the course of its globalizing strategy, the German connector- and housing specialist ESCHA starts up direct sales abroad for the first time: On 1 July 2012 the company welcomed Andreas Mader as its first Field Salesman in Austria. Operating from the capital Vienna, Mr. Mader will support existing customers as well as extend the business operations. Simultaniously ESCHA will continue to market its products
10-22-2009 | Advertising, Media Consulting, …
Advertising Association Vienna
Creative Austria meets creative Russia
Euroforum: communicatin ready for the next lap Vienna. On 22nd of October 2009 the advertising association Vienna invites again to the annual Euroforum: communication event, platform for European communication, guaranteeing an interesting mix of “connecting businesses and communications”. The Event takes place in Studio 44, Vienna. Focus point Russia (Moscow, St. Petersburg and Sotschi) The main goal of the Euroforum is to promote and establish business relations and synergies between
03-13-2008 | Arts & Culture
University of Vienna
Archaeological Sensation in Austria
Scientists from the University of Vienna unearth the earliest evidence of Jewish inhabitants in Austria Archaeologists from the Institute of Prehistory and Early History of the University of Vienna have found an amulet inscribed with a Jewish prayer in a Roman child's grave dating back to the 3rd century CE at a burial ground in the Austrian town of Halbturn. The 2.2-centimeter-long gold scroll represents the earliest sign of
Comments about openPR
Your portal is fast, simple, and easy to use. Others may have more functions but they also demand more editing time, you have to preformat the text in order to achieve a good result etc. I think openPR is really fantastic!
Andreas Knepper, wallmedien AG