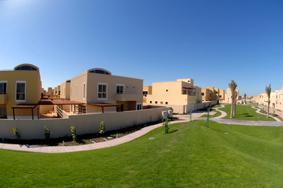 In order to serve the markets in the Middle East, the Austrian solar thermal manufacturer TiSUN founded the subsidiary TiSUN GCC FZC in Dubai at the beginning of December 2011. The first projects in the MENA-region have been successfully implemented. A major project in Abu Dhabi is equipped with solar systems “made in Austria”."The countries on the Arabian Gulf are among the sunniest regions in the world. With nine hours per day, the amount of sunshine is much higher than in any European country. This is one reason why the Middle Eastern countries provide the ideal conditions for the installation of solar thermal systems," explains TiSUN CEO Robin M. Welling of the economics of renewable energies in the Arabian markets.Since December 2011, TiSUN G.C.C. FZC distributes (plans, installs, designs and services) its solar thermal systems in the United Arab Emirates, Bahrain, Qatar, Oman, Saudi Arabia and Iraq. A major project in Abu Dhabi is currently being implemented with the Al Raha Gardens project, an oasis of calm in the 600,000 inhabitant city of Abu Dhabi. On a total area of six km², 750 houses, gardens with several pools, two private schools, kindergardens and commercial buildings have been built. 28 luxury single-family houses in this area will be supplied with environmentally friendly hot water provided by a TiSUN solar thermal system. With a total collector surface area of 8 m² (four module collectors per house) and a 500 liter fresh water tank each house generates energy for the minimum of 4 persons. The solar fraction of the TiSUN system is 70 percent. Bashar Muhtadi, Managing Director of TiSUN G.C.C. FZC, is pleased with the positive development of the Middle Eastern markets: “The integration of solar heating systems in the modern building environment has become a standard in the MENA (Middle East + North Africa) region in the last three years - especially when public institutions, such as schools, hospitals and government buildings are constructed. Thanks to the many hours of sunshine in the Gulf region, solar thermal systems amortize within less than five years and therefore build the ideal solution for energy recovery. Our experience has shown that the quality of European products is appreciated in the Middle Eastern countries, while inferior low-price products are hardly successful. The United Arab Emirates have been our strongest markets in 2012 so far. For 2013 we see great potential in Qatar, where we are already planning some major projects for the application of Qatar as the host of the FIFA World Cup in 2022.” "The Gulf regions are among the largest exporters of fossil fuels. A change in mind-set from fossil to renewable energy is already in evidence. The demand for solar installations in the Middle East is rising and many construction projects in Dubai and Abu Dhabi will be built sustainably. In a few decades a large extent of the energy needed in the Arab countries could be covered by solar energy," comments Robin M. Welling. "We want to become one of the market leaders in Middle East – particularly in the field of large-scale solar plants."TiSUN has been developing, producing and selling complete systems for the utilisation of solar heating energy for over two decades. The solar systems provide 100% independent, infinitely available, free solar energy for backup heating, water heating, process heat and cooling. Known as Europe's solar heating specialist, TiSUN has an export quota of 83%. The company employs a workforce of 120 at the main location in Tyrol/Austria and 90 sales personnel in Europe. TiSUN products are available in 44 markets in the EU27 and candidate countries, Switzerland, the former CIS states, the USA, MENA and India. All serially produced solar collectors feature multiple certifications. In addition to the Solar Keymark, which is valid across Europe, and the Austria Solar Seal of Quality, quality certifications from five other countries confirm the high standard of the products. The ISO 9001:2000 Quality Management Test Certificate verifies that both product and service quality levels are especially high. Since 2010, the company has also been certified under the international environmental management standard ISO 14001.TiSUN GmbH Stockach 100 6306 Söll

11-07-2012 | Energy & Environment
TiSUN GmbH
Durham University Leads the Way with Environmentally Efficient Building
The city of Durham has always had a proud heritage of beautiful buildings that stretches back to medieval times. The city in the north-east of England boasts the 11th century Durham Castle and the breathtaking grandeur of Durham Cathedral (forming a UNESCO World Heritage site), and can now be equally proud of the new Palatine Centre at the University of Durham. Durham University was founded in 1836, is one of Britain’s
09-18-2012 | Energy & Environment
TiSUN GmbH
“We export to more than 50 markets”
TiSUN welcomes in Latvia and Albania new exclusive partners in Northern and Southern Europe The internationalization of TiSUN is strengthening the home market and increasing employment in Tyrol as well as taking Tyrolean quality to the whole world. Michael Reinshagen, the TiSUN assistant of international sales, appointed the company Profesion Klima sh.p.k as the exclusive dealer for Albania. The first large project has been achieved with the installation of a
04-23-2010 | Energy & Environment
TiSUN Gmbh
Not only the ball is round
… but also the sun’s fiery orb which delivers warmth for heating and domestic hot water with the help of TiSUN large scale solar collectors on the roof of a sports club in Upper Austria. Mr. Brunner, chairman of the local sports and gymnastics club focused on solar energy for their new building. The solar system supports the pellet boiler during winter for space heating, and during summer covers the domestic
03-15-2010 | Energy & Environment
TiSUN Gmbh
TiSUN, sea and sand
The Olira Boutique Hotel in Bodrum, Turkey, uses solar warmth to heat water for showers and baths and for the pool complex, captured by a TiSUN solar system This recently renovated hotel on the Aegean coast is particularly proud of its recreation and wellness area where it pampers its guests with a range of different water features. 56 m2 TiSUN FM-W module collectors supply solar heat to three Pro-Clean® solar stratified tanks

01-23-2018 | Tourism, Cars, Traffic
Marketing Pro Junction
Celebrate Christmas and New Year with Cristal Hotel Abu Dhabi
The countdown to the festive season has begun. If you are planning to be in Abu Dhabi a stay at the Cristal Hotel Abu Dhabi will put you right in the heart of the capital surrounded by major tourist spots and festive activities. Enjoy the taste of traditional Christmas and New Year delights on offer at the hotel as you explore the city’s amazing attractions and events, including the newly
12-10-2011 | Tourism, Cars, Traffic
MPJ
Liwa Executive Suites Targets Event Visitors to Abu Dhabi
With the region’s highest occupancy growth rate during October, up 10.5 per cent to 76 per cent according to STR Global figures, hotels in Abu Dhabi are gearing up for a further boost in business during the winter months on the back of a strong events calendar. According to Amr Hamed, Hotel Manager of the Liwa Executive Suites managed by Coral Hotels & Resorts, the success of the Abu Dhabi Tourist
04-08-2011 | Energy & Environment
The Energy Exchange
Clarion Events opens office in Abu Dhabi
Clarion Events, and its subsidiaries The Energy Exchange and World Refining Association, have been granted a trade license to start operations in Abu Dhabi and have opened a new office to support its work in the upstream and downstream oil and gas sector in the Middle East. The new office in Abu Dhabi: * Reinforces our commitment to our clients and the region with a locally based team and infrastructure * Broadens our market
03-15-2011 | Business, Economy, Finances, B …
Samsonite
Samsonite opens new store at Dalma Mall in Abu Dhabi
Samsonite opens new store at Dalma Mall in Abu Dhabi 11th store in the UAE is part of company’s aggressive growth plans Reinforcing its aggressive growth plans across the Middle East, Samsonite Group – the worldwide leader in travel solutions – has announced the opening of its new store at Dalma Mall, a leading shopping destination in Abu Dhabi. The new store is Samsonite’s 2nd mono brand outlet in Abu
07-02-2010 | IT, New Media & Software
Saigun Technologies Pvt Ltd
SAIGUN TECHNOLOGIES APPOINTS EMPXTRACK DISTRIBUTOR IN ABU DHABI
July 1, 2010 (India) : Saigun Technologies appoints NBiz Infosol as an exclusive distributor of EmpXtrack in Abu Dhabi, UAE. EmpXtrack is a web based Human Resources & Talent Management HR software that automates all HR processes in any organization. Tushar Bhatia, President of Saigun Technologies said "We feel there are lots of opportunities in UAE and having a local distribuor in Abu Dhabi will further strengthen our sales there.
02-26-2009 | Logistics & Transport
World Food Programme & Maximus Air Cargo
FIRST GLOBAL CONFERENCE ACCLAIMED - Delegates praise inaugural Abu Dhabi event
Delegates to the first Global Aviation Safety Conference for Humanitarian Air Operations, held in Abu Dhabi at the end of last week, were unanimous in endorsing the event. The conference focused on aviation safety and the unique difficulties faced in transporting aid personnel and materials to sites that are often barely accessible. “This was an excellent forum to explore and share the problems and solutions inherent in airborne humanitarian operations,”
Comments about openPR
9 o'clock: discuss press release with client, 10 o'clock: submit release to openPR, within the briefest possible time release is published and displayed in a prominent place on openPR.de. I am thrilled!
Zehra Spindler, Calypso Now! - Communication Agency