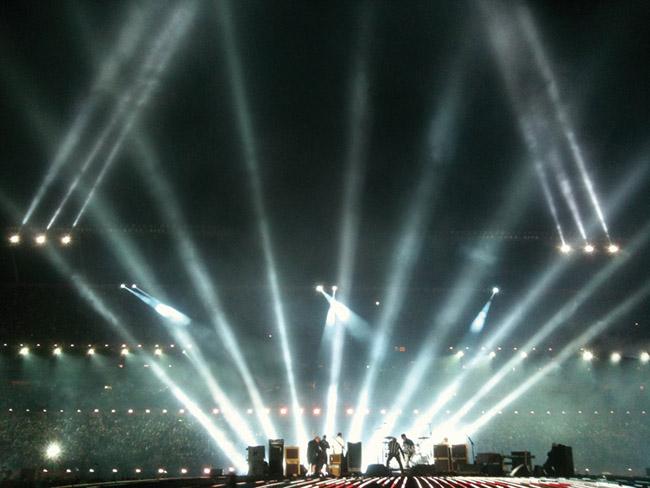 It was a terrific halftime show that inspired the live audience and viewers at home with a combination of Pyro-, Laser and Lighting Effects and hits from “The Who”. At a time when no one suspected the New Orleans Saints to win the game, the stadium crowd of the 44th Super Bowl in Miami celebrated and enjoyed the extremely popular halftime show. In the 12 minute space, The Who performed five hits out of their repertoire which swept the crowd away. The FALCON Xenon Searchlights were throughout being integrated in the diversified stage lighting show designed by Al Gurdon and shown through a crowning achievement and powerful colours. The technical support was provided by Full Flood. The US service provider already has several experiences using the FALCON range and likes to frequently use the searchlights manufactured by alpha one. A&O Technology USA supplied Full Flood with a total of 12 FALCON 6000 CMY and 14 FALCON BEAM 7000W. This year marks the fourth time that A&O USA successfully supported the Super Bowl half time show. With previously staging performances by Prince, Tom Petty and the Heartbreakers and Bruce Springsteen and the E-Street Band, it was now the worldwide famous english Rock’n Roll band “The Who” who shined in the spotlight.This XLIV Super Bowl was watched by an average of about 106.5 million US viewers (a total of 151.6 million tuned in overall), according to NFL.com, which is a record breaking number and marks the 44th Super Bowl as the most watched ever in sport history. Apart from the US channel CBS, the German state channel Das Erste broadcasted the final match of the NFL live.A&O Lighting Technology GmbH, which was founded by Marco Niedermeier, has been actively engaged in the hiring and sale of show and architectural lighting equipment since 1995. A&O's diverse inventory includes special LED equipment and several hundred searchlights (high-power xenon floodlights) that can be used for well-known entertainment- and architectural lighting applications. It also has the exclusive worldwide distribution rights to a variety of architectural luminaries and searchlights, such as the FALCON® range from alpha one. A&O Lighting Technology, with its head office in Germany, is active worldwide with subsidiaries and offices in UAE, USA and UK. For more information, visit: www.ao-technology.comA&O Lighting Technology GmbH, Industriestraße 31-33, 28876 Oyten, Germany, Telephone: 0 42 07 / 66 84-0, Internet www.ao-technology.com, Contact: Tanja Niedermeier

01-31-2017 | Leisure, Entertainment, Miscel …
IMAGE UNLIMITED COMMUNICATIONS
Super-Sized, Super Bowl @ Pier 6
Experience history in the making! On Sunday, February, 5th, 2017, Pier 6, along with Harpoon Brewery will be cheering on the Patriots as they fight for their fifth Super Bowl Championship Title against the Atlanta Falcons. In true Patriots style, expect to go big or go home at Pier 6, as this viewing party is stacked with championship-style giveaways throughout each quarter that include a grand prize pair of K-2
08-08-2016 | Science & Education
FWF - Austrian Science Fund
The marine super glue
Barnacles exude an adhesive with exceptional bonding properties. In a project supported by the Austrian Science Fund FWF, biologists from Vienna have investigated this substance which has enormous medical and engineering potential and have thereby gained many new insights. It was a typical case of serendipity. Strolling along a beach on the Danish North Sea coast during his holidays and looking at the flotsam beneath his feet, a German scientist
07-19-2016 | Leisure, Entertainment, Miscel …
Sheraton Bandung Hotel and Towers
TUJUH HARI, SUPER DISKON
Waktu Terbatas! Diskon tarif menginap hingga 50% (Bandung – Juli 2016) Liburan sekolah sudah berakhir, namun tidak ada salahnya jika anda memesan kamar dari sekarang untuk liburan selanjutnya. Hotel & Resort Starwood Asia Pasifik mempersembahkan program Tujuh Hari, Super Diskon. Diskon tarif menginap hingga 50% dengan waktu terbatas, hanya tujuh hari. Jika Anda sudah lama menunggu waktu yang tepat untuk liburan, sekaranglah saatnya! Nikmati diskon tarif menginap hingga 50% di Sheraton
07-19-2016 | Industry, Real Estate & Constr …
Sheraton Bandung Hotel and Towers
SEVEN DAYS, SUPER SAVINGS
Limited time offer, now enjoy up to 50% off standard rates (Bandung – July 2016) If you have been waiting for the right moment for a getaway, now is your chance! Enjoy up to 50% savings on stays at Sheraton Bandung Hotel & Towers. But that's not all – SPG members save an additional 5%! Book between 18 - 24 July 2016 to enjoy these exclusive rates and stay with us
04-21-2016 | Leisure, Entertainment, Miscel …
Wine Connextion
A Super Tasting of Super Tuscans
WHAT: Explore Tuscan wines like never before! The Wine ConneXtion located in North Andover, MA invites guests to join them for a complimentary wine tasting of Super Tuscans on Saturday, May 14th, 2016. From 1:00PM to 5:00PM the Wine ConneXtion will take guests on a trip to Italy and back as they explore all there is to know about
02-02-2012 | Leisure, Entertainment, Miscel …
Fire & Stone
American Super Bowl Delights
Join in with the Super Bowl action and add some touches from across the pond to your life. Celebrate the highly anticipated annual sporting event with a range of American influenced scrummy pizzas at deliciously different restaurant Fire & Stone. Touch down at one of the five restaurants and experience a delightful American treat on Super Bowl Sunday. Examples from the menu: New York: Mozzarella, tomato sauce, crispy smoked bacon, garlic
Comments about openPR
OpenPR is clearly structured and remains true to its principle of confining itself to the essential parts. OpenPR has proven to be a very good and reliable partner to our media agency: Within the shortest time the releases are online and go down well with the media representatives. The success of OpenPR is reflected in the steadily increasing number of press releases. It is good that OpenPR exists!
Ursula Koslik, Director Marketing & PR, F+W Hamburg