‘Super K’ - Super Hero of the kids, by the kids 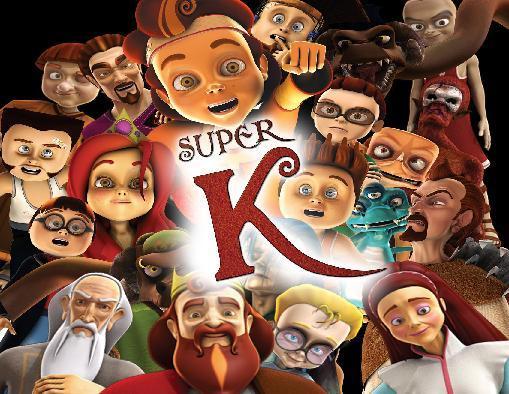 Mumbai, October 24, 2011: ‘Super K’, India’s first 3D CGI animation film to be released online to be watched free, anytime, any place, any device and many times, is the story of a new Super Hero of the kids and by the kids. ‘Super K’ (www.superkloud.com) can release on a possible 3 million screens while ‘Ra.One’ releases in around 3,500 theatrical screens. With the tagline, ‘Some Heroes are born while Super K was created’, the 95-minute full length 3D CGI animated features a super hero who is created and a goof-up causes him to turn out to be a freak unable to control his powers. As Badmess along with the evil Dr. Ozox plans to take over Dreamzone, ‘Super K’ has to team up with his friends and also learn to control his powers. The story of ‘Super K’ explores his magical escapades in Dreamzone, with an interesting mix of action, comedy and fantasy. Super K is created with powers of all clouds for fulfilling his father’s ambitions of becoming King of Dreamzone. Blessed with abilities beyond his control, brave and charming but called a freak. Will he change his destiny?? Super K's voice has been lent by Yash Navin Hegde-Borkar, 11 year old from Bandra who studies in Jamnabai Narsee school. Yash is very good in drawing cartoons and makes his own cartoon booklets. He is very good in studies and a Jazz Dancer, who has taken training for 3 years. He has given stage performances as the main lead for the same. He is gadget crazy and takes cricket coaching. He plays basketball and skates well. He is a voracious reader. He has taken training at Raell Padamsee &Nadira Babbar's academy. Kiara is pretty as a princess with an equally feisty attitude. She's Super K’s best friend. Her voice has been lent by Mahia Desylva, a 12-year old Bandra girl. Mahia is a writer, voice over and radio artiste and an A class student. She loves reading and writing plays. She has produced several of her plays for 'Jago Mumbai' - the local community radio station. She enjoyed playing the role of Kiara in Super K. Besides, wind surfing and sailing are her favorite hobbies Accidentally & Suddenly are the bumbling sidekicks of Badmess. Accidently is a little more intelligent of the two, while suddenly interprets everything to his convenience. Badmess is the creator of Super K, his sole aim in life is to be king of Dreamzone. A genius but a bitter, reclusive person. Arbit “Spiderman, Harry Potter, Wolverine, Captain Jack Sparrow…who am I?” Arbit. Arbit is Destiny’s Child, who is having an identity crisis. What will become of him? Will he find his true calling in life? Conceptualised, and produced by Smita Maroo, directed by Vijay Bhanushali, the super hero animation film and Shemaroo’s first home production, ‘Super K’, will be easily available and accessible anywhere and to anyone who has Internet connection and access. The unique film will be released on online platforms in the month of November in two languages (English and Hindi), which will make it the biggest release ever for any animation film in India. Talking about her most ambitious and pioneering venture, the multi-faceted Smita Maroo, Head-Animation Business, Shemaroo Entertainment Limited, says, “The online release of ‘Super K’ is the first-of-its-kind in the Indian entertainment business and a breakaway concept away from the confines of theatrical releases. Children’s films are rare in themselves but empowering and allowing parents and kids to watch ‘Super K’ in the comfort of their homes or anywhere anytime at their convenience will bring entertainment to peoples’ doorsteps. ‘Super K’ will open up new avenues in Indian entertainment and also set up new standards in providing entertainment in online digital media.” Disclaimer: The Company is proposing, subject to market conditions and other considerations, a public issue of its equity shares and has filed a Draft Red Herring Prospectus with the Securities and Exchange Board of India ("SEBI"). The Draft Red Herring Prospectus is available on the website of SEBI at www.sebi.gov.in and the website of the Book Running Lead Managers at www.yesbank.in and www.icicisecurities.com . Investors should note that investment in equity shares involves a high degree of risk and for details relating to the same, see the section titled "Risk Factors" of the Draft Red Herring Prospectus. The equity shares of the Company have not been and will not be registered under the U.S. Securities Act of 1933, as amended ("U.S. Securities Act") or any state securities laws in the United States, and may not be offered or sold within the United States or to, or for the account or benefit of, "U.S. persons" (as defined in Regulation S), except pursuant to an exemption from, or in a transaction not subject to, the registration requirements of the U.S. Securities Act and applicable U.S. State Securities laws." Shemaroo Entertainment Ltd., at the forefront of the dynamic and growing Indian Entertainment industry, is an established integrated media content house in India with activities across content acquisition, value addition to content and content distribution. Together with film-based copyrights and other entertainment rights the brand "Shemaroo" is synonymous with quality entertainment. Shemaroo House, Plot No 18, Marol Co-op. Industrial Estate, Saug Baug, Marol Naka, Off. Andheri-Kurla Road Andheri (E), Mumbai 400 059. Phone:+91-022-28529911 Email: customerservice@shemaroo.com

You can edit or delete your press release ‘Super K’ - Super Hero of the kids, by the kids here

06-22-2021 | Health & Medicine
Super Boost Wifi
Super Boost WiFi Booster Reviews - Does Super Boost Wifi Work-Complete Info
Strong Current Enterprises, Dont Buy a Super Boost WiFi Booster Before You Read this Honest Review! Dont Waste Your Money, Is the Superboost WiFi Extender is the BEST Wifi Signal Booster? Find out the facts, advantages negative aspects of Super Boost WiFi Booster before you decide if you want to purchase one. http://claimspecialdiscount.site/Get-SuperBoost-Now Even within the present internet age, a whole lot of us enjoy the net unbearably at various factors
02-20-2020 | Business, Economy, Finances, B …
REPORTSANDMARKETS
Retail Superannuation Funds Market Impressive Gains including key players: AMP F …
Global Retail Superannuation Funds Market Size, Status and Forecast 2020-2027 The report studies the Retail Superannuation Funds industry's coverage, current market competitive status, and market outlook and forecast by 2027. The report clarifies business verticals like aggressive market situation, regional nearness, and improvement openings. The report is incomplete without having the knowledge of the key players or competitors within the market. Different sidelines of the area along with a SWOT investigation
01-31-2017 | Leisure, Entertainment, Miscel …
IMAGE UNLIMITED COMMUNICATIONS
Super-Sized, Super Bowl @ Pier 6
Experience history in the making! On Sunday, February, 5th, 2017, Pier 6, along with Harpoon Brewery will be cheering on the Patriots as they fight for their fifth Super Bowl Championship Title against the Atlanta Falcons. In true Patriots style, expect to go big or go home at Pier 6, as this viewing party is stacked with championship-style giveaways throughout each quarter that include a grand prize pair of K-2
04-21-2016 | Leisure, Entertainment, Miscel …
Wine Connextion
A Super Tasting of Super Tuscans
WHAT: Explore Tuscan wines like never before! The Wine ConneXtion located in North Andover, MA invites guests to join them for a complimentary wine tasting of Super Tuscans on Saturday, May 14th, 2016. From 1:00PM to 5:00PM the Wine ConneXtion will take guests on a trip to Italy and back as they explore all there is to know about
02-02-2012 | Leisure, Entertainment, Miscel …
Fire & Stone
American Super Bowl Delights
Join in with the Super Bowl action and add some touches from across the pond to your life. Celebrate the highly anticipated annual sporting event with a range of American influenced scrummy pizzas at deliciously different restaurant Fire & Stone. Touch down at one of the five restaurants and experience a delightful American treat on Super Bowl Sunday. Examples from the menu: New York: Mozzarella, tomato sauce, crispy smoked bacon, garlic
01-10-2007 | Fashion, Lifestyle, Trends
Shannon Cherry
Super Healthy Snack for the Super Bowl
Nothing complements the Super Bowl more than a wide selection of foods. A new healthier snack chip, Grab Em Plantain Chips, is bound to score high on Super Bowl Sunday or any other hungry, nail-chewing game day. Every year, football fans buy up more than 15,000 tons of chips, scarf down eight million pounds of guacamole, and pop up and serve 4,500 tons of popcorn. In fact, Super Bowl Sunday is
Comments about openPR
Your portal is fast, simple, and easy to use. Others may have more functions but they also demand more editing time, you have to preformat the text in order to achieve a good result etc. I think openPR is really fantastic!
Andreas Knepper, wallmedien AG