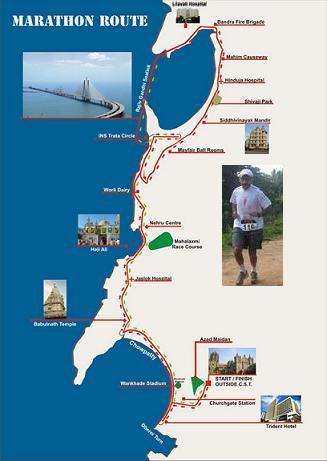 Bhasker’s goals include running the original historical course at the Athens Marathon and qualify for Boston Marathon by 2014 which requires for men in the age group of 55 -59, a qualifying time of just 3 hours and 45 minutes.The marathon, 26.2 miles, is not necessarily the easiest sport. In fact, most people think marathon runners are downright nuts. Marathon running is about mental preparation more than a lot of other factors. One needs strength, stamina, endurance and a super strong mental attitude which brings the determination to keep running no matter how tired one is. Nothing beats the exhilaration of marathon running. It doesn't matter whether one come first or last as it is a race against oneself.To quote Fred Lebow, New York City Marathon co-founder, "The marathon is a charismatic event. It has everything. It has drama. It has competition. It has camaraderie. It has heroism. Every jogger can't dream of being an Olympic champion, but he can dream of finishing a marathon." Many students who graduate from Birla Institute of Technology and Science – popularly known as BITS Pilani take up marathon running as a mission with passion to ensure that there are no dreams too large, no innovation unimaginable and no frontiers beyond reach. Some Proud to be BITSians like Bhasker Sharma are in fact marathon maniacs. Bhasker was a student at BITS during 1974-1979 and obtained his B.E. (Hons) Electrical and Electronics Engineering degree.This Techie presently is an IT professional from Bangalore who is very passionate about evangelizing running. He has been running for over 25 years now and took to running beyond 10 Kms in 2002 and got addicted to distance running after completing his first Full Marathon in January 2003 at Chennai. He has been playing a stellar role in Runners For Life - RFL a movement to popularize distance running in Bangalore.In year 2005 he participated in NJ Marathon (Long Branch) which was his first outside the country. Year 2006, he took the Standard Chartered Mumbai Marathon, NJ Marathon and Times of India Bangalore International Marathon. Year 2007 he went on to complete the Standard Chartered Mumbai, Flora London, Bangalore Midnight, SunTrust Richmond and the First Bangalore Ultra.Starting year 2008 with the Mumbai marathon he went on to Hyderabad Half and Full Marathon, RFL Kanakpura Road Run, Kaveri Trail, Bangalore Ultra and RFL Ballandur Run. Year 2009 he completed the Mumbai, Auroville, SunTrust National marathon Washington DC, RFL Hennur – EGL – Bellandur - Olde Run and the Bengaluru Ultra marathons. With 1 marathon each in 2003 and 2005, 3 marathons in 2006, 5 marathons in 2007, 6 marathons in 2008 and 8 marathons in 2009, Bhasker had completed 24 marathons by December 2009. His participation in Standard Chartered Mumbai Marathon on January 17, 2010 became his 25th Marathon. With BIB number 513, veteran Bhasker completed the Mumbai marathon with overall ranking of 89, Finish Time of 4:01:15 and Chip Time of 4:00:56. Finish or Gross Time is the time from Gun Time to individual finish time. Chip time or net time is the individual start time to finish time. The overall ranking is based on Finish Time.Apart from Mumbai marathon, Bhasker for the year 2010 has targeted the marathons at Auroville (Pondicherry), Hyderabad, Athens and Bangalore ultra. Bhasker who is indeed a dreamer, performer and achiever from BITS Pilani has a goal of completing 60 marathons by the age of 60 and the rate at which he is going, no one has any doubts about him achieving that.Bhasker runs for a cause which is Dream A Dream founded in 1999 a registered charitable trust which seeks to empower children from vulnerable backgrounds by developing life skills and at the same time sensitizing the community through active volunteering leading to a non-discriminatory society where unique differences are appreciated. Currently, Dream A Dream reaches out to over 1500 children through an active network of over 1000 community volunteers. Bhasker has set a goal to raise Rs 3 Lakhs this year for Dream A Dream.To contact Bhasker Email bhskr@yahoo.com For More details about Dream A Dream click http://www.dreamadream.org/About BITS Pilani: The Birla Institute of Technology and Science - BITS Pilani is a Deemed to be University established vide Sec.3 of the UGC Act, 1956 under notification No. F.12-23/63.U-2 of June 18, 1964. NAAC - National Assessment and Accreditation Council reaccredited BITS with 3.71 CGPA out of 4 and awarded "A" grade "Very Good" status. It is indeed a matter of pride that for the year 2009, BITS Pilani has been ranked among the top ranking universities along with IITs in various Magazine surveys such as India Today, Outlook, LiveMint, DataQuest etc. BITS offers degrees in various disciplines presently at Pilani, Dubai, Goa and Hyderabad campuses. Admissions to BITS is based on the online examination BITSAT. BITS Pilani has done pioneering work in industry university collaborations in terms of Practice School and Work Integrated Learning Programmes. Alumni of the Institute who are Proud to be BITSians and ambassadors for Brand BITS Pilani are spread across all continents from Australia to America.Dr BR Natarajan Professor & Vice President BITS Alumni Association BITS Pilani rajasthan 333031 India Phone 91-1596-242210 Fax 91-1596-244183 Email brnt(at)bits-pilani.ac.in Website http://www.bits-pilani.ac.in

04-08-2022 | Sports
PikuSports Entertainment Pvt Ltd
PikuSports successfully organized 6th Edition of Noida Grand Marathon at Jaypee …
More than 1000 people participated from Noida/ Delhi and different states of India. Some of the participants were from Govt. Departments, reputed corporates, Senior citizens groups, NGO's and other organizations. The event aimed at encouraging people towards daily fitness and healthy living. Mr. M A Subramanian, Ministry of Health and Family Welfare (Tamil Nadu) graced the event as an Honourable Chief Guest and also participated in 21.1 Km half marathon. This
01-24-2022 | Industry, Real Estate & Constr …
Evolve Business Intelligence
Global Industrial Compactors Market: Emerging Trends, Major Key Players SP Indus …
According to the report, The global Industrial Compactors market size is expected to reach $ Billion by 2028 growing at the CAGR of 3.5% from 2021 to 2028. Major factors driving the growth of the Industrial Compactors Market are increasing construction activities and the development of infrastructure. In addition, increasing awareness about industrial compactors and increasing recycling activities in Asia-Pacific is also driving the industrial compactor market. Request Free Sample Report
01-11-2022 | Business, Economy, Finances, B …
Shareholders Foundation
Lawsuit filed for Investors in shares of Marathon Digital Holdings, Inc. (NASDAQ …
An investor, who purchased shares of Marathon Digital Holdings, Inc. (NASDAQ: MARA), filed a lawsuit in the U.S. District Court for the District of Nevada over alleged violations of Federal Securities Laws by Marathon Digital Holdings, Inc. f/k/a Marathon Patent Group, Inc. Investors who purchased shares of Marathon Digital Holdings, Inc. (NASDAQ: MARA) have certain options and for certain investors are short and strict deadlines running. Deadline: February 15, 2022. NASDAQ:
11-30-2021 | Business, Economy, Finances, B …
Shareholders Foundation
Investigation announced for Investors in shares of Marathon Digital Holdings, In …
An investigation was announced over potential securities laws violations by Marathon Digital Holdings, Inc. in connection with certain financial statements. Investors who purchased shares of Marathon Digital Holdings, Inc. (NASDAQ: MARA), have certain options and should contact the Shareholders Foundation at mail@shareholdersfoundation.com or call +1(858) 779 - 1554. The investigation by a law firm focuses on possible claims on behalf of purchasers of the securities of Marathon Digital Holdings, Inc. (NASDAQ: MARA)
11-24-2021 | Arts & Culture
SENSE OFFENCE LIMITED
New Zealand Rapper Attempts Guinness World Record For Longest Rap Marathon
New Zealand hip hop artist Sense Offence will attempt to break the Guinness World Record for Longest Rap Marathon by freestyle rapping continuously for 40 hours starting on Saturday, 27 November at 8am. The attempt has gained significant attention, both nationally in New Zealand on major news outlets such as The Edge and internationally receiving commentary from famous rappers including the current world record holder George Watsky. The attempt will take place
01-11-2021 | Fashion, Lifestyle, Trends
The Toybox Charity
Virgin London Marathon places available with street children's charity
Have you set yourself a challenge for 2021 to get fit? Started a training program and eating clean? Keep it up and run in the Virgin London Marathon 2021! The ballot for marathon places has now closed, but you could snap up a charity place, released today! Milton Keynes based children’s charity Toybox has 5 places available to runners who would like to sign up to fundraise for their place. Toybox is
Comments about openPR
OpenPR ist the nicest and most clearly laid out PR platform I have seen to this day. The press releases are displayed very nicely and clearly and without any unnecessary frills. The updates are fast and the finished release looks appealing and is clearly legible. Even with 16 years of experience one discovers new things from time to time. Congratulations!
Gabriele Ketterl, Director Marketing & PR, Menads