The Italian True Fleet Market back to growth again 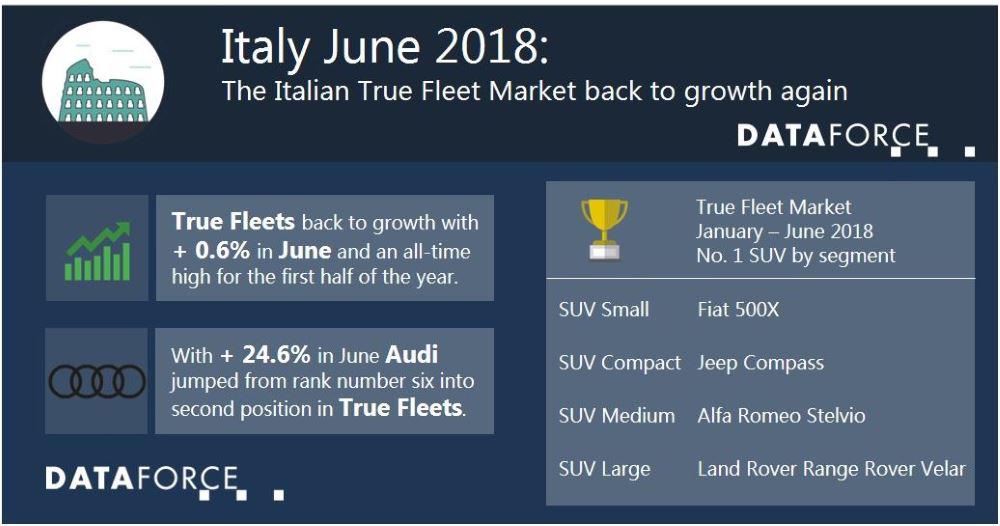 Following the dip in May the Italian True Fleet Market returned to growth again in June even if the increase was rather marginal with + 0.6%. While Private customers registered almost exactly the same amount of new passenger cars as in June 2017 (- 98 units) the volume on both Dealerships/ Manufacturer (- 21.7%) and Short Term Rentals (- 27.6%) decreased significantly. Consequently the Total Market stayed below 187,000 registrations and scored a minus of 6.7%.Looking on the performance for the first half year of 2018 the passenger car market overall was down by - 1.2%. This was mainly caused by the reluctance of private customers which have registered 4.2% less new vehicles from January to June. Special Channels registrations remained constant (+ 0.2%) but True Fleets were shining: + 7.1% pushed this segment to a new all-time record for the first six months!Brand performance Fiat was in the red with - 17.9% but stayed clearly in the lead nevertheless. But beside the manufacturer from Torino, Mercedes in 4th place was the only brand in the top 10 which kept its position from June last year. So there was a lot of movement in the ranking. Thanks to a growth of 24.6% Audi gained four positions and jumped in second place. The performance of A3, A4 and the SUV models Q2, Q3 and Q5 helped the premium brand from Ingolstadt to achieve its highest market share since August 2017. Volkswagen (+ 6.0%) ranked 3rd followed by Mercedes, Ford and Renault who all had to suffer a double-digit slide. BMW in 7th place was in good shape with a surplus of + 16.2%. Jeep (8th, + 71.8%) and Toyota (9th, + 70.9%) scored fantastic results in June and both improved by four positions in the ranking. For Jeep the new generation Compass continues to be the chief protagonist for the positive outcome. Within Toyota there were two main pillars for success with the C-HR and the Yaris. The latter even scoring its highest monthly volume in True Fleets in Italy so far. Peugeot completed the top-10 ranking this month but only 35 registrations ahead of Alfa Romeo. Vehicle segments performance As expected the growth in True Fleets in June was again primarily fuelled by SUVs (+ 32.3%) with no less than six models in the top 7. Their share within the fleet customers reached 44.7% which means not only another record but also a higher portion than the sum of the vehicle segments Mini, Small, Compact, Middle-Class and Luxury combined! And in fact the group of SUV has become so large that it makes sense to run a short analysis by the different sizes of models. With 45.1% the Compact SUVs are dominating in the first six months of 2018 followed by Small (25.5%), Medium (21.8%) and Large (7.5%). And while the leader of the Large SUV is the Land Rover Range Rover Velar the other three classes are in the hand of the FCA group with Fiat 500X, Jeep Compass and Alfa Romeo Stelvio claiming the podium positions in their respective model size.The SUV product offer has become overwhelming. In the first half year we could see no less than 73 different models with at least a hundred registrations on fleet customers. Despite this variety there is one thing they have in common: the continuous popularity of Diesel. Even if the shares have slightly decreased over the last 12 months we still see values of 86.2% (SUV Small) and 90.9% (SUV Compact). (585 words; 3,341 characters)Publication by indication of source (DATAFORCE) and author (as listed below) onlyDATAFORCE – Focus on Fleets Dataforce is the leading provider of fleet market data and automotive intelligence solutions in Europe. In addition, the company also provides detailed information on sales opportunities for the automotive industry, together with a wide portfolio of information based on primary market research and consulting services. The company is based in Frankfurt, Germany.Michael Gergen Dataforce Verlagsgesellschaft für Business Informationen mbH Hamburger Allee 14 60486 Frankfurt am Main GermanyPhone: +49 69 95930-231 Fax: +49 69 95930-333 Email: michael.gergen@dataforce.de www.dataforce.de

12-12-2018 | Business, Economy, Finances, B …
Market Research Hub
Global All-Wheel Drive SUV Market Insights, Forecast 2025
An up-to-date research report has been disclosed by Market Research Hub highlighting the title “Global All-Wheel Drive SUV Market Insights, Forecast to 2025” which provides an outlook for current market value as well as the expected growth of "All-Wheel Drive SUV Market" during 2018-2025. The report studies the casing heads market worldwide, especially in North America, China, Europe, Southeast Asia, Japan and India, with production, size, growth, revenue, consumption, import
11-27-2018 | Science & Education
Grand Research Store
SUV Oil Tempered Spring Steel Wire Market Research Report 2018
This report studies the global SUV Oil Tempered Spring Steel Wire market status and forecast, categorizes the global SUV Oil Tempered Spring Steel Wire market size (value & volume) by manufacturers, type, application, and region. This report focuses on the top manufacturers in North America, Europe, China, Japan, South Korea, India and other regions (Southeast Asia, Central & South America, and Middle East & Africa) Download FREE Sample of this Report
10-23-2018 | IT, New Media & Software
Future Market Insights
SUV Market to Witness Soaring Growth During Upcoming Years
Sports Utility Vehicles (SUVs) assume a new meaning in India. In a country, where vehicles and their cost is deeply steeped into the notions of power and affluence, more Indians are shunning humble hatchbacks and gentlemanly sedans to opt for the ferocious, on-your-face SUVs. This new-found love for power and prestige has the Society of Indian Automobile Manufacturers smiling, as the segment (UVs) grew a staggering 30% in FY 2016-17.
08-17-2018 | Advertising, Media Consulting, …
Spire Research and Consulting
India among the world’s top compact SUV markets
India overtook Japan in 2017 as the third largest manufacturer of compact SUVs. Big players such as Renault, Mahindra & Mahindra, Ford Motor, Hyundai Motor, Maruti Suzuki and other SUV manufacturers sold 457,698 compact SUVs in 2017 – over four times the unit sales in 2015, at 107,634. While 2016 saw shrinking sales for this vehicle category in China and the USA, sales in India grew nearly 50% from 307,365 units in
12-15-2017 | Business, Economy, Finances, B …
qyresearchreports.us
SUV Ignition Coil Market Supply & Demand Research Report 2017
QY Research Reports analysts estimate the SUV Ignition Coil Market to grow at a substantial CAGR during the forecast period 2017 to 2022. In this report, the global SUV Ignition Coil market is valued at USD XX million in 2016 and is expected to reach USD XX million by the end of 2022, growing at a CAGR of XX% between 2016 and 2022. Geographically, this report split global into several key Regions,
06-15-2017 | Advertising, Media Consulting, …
Future Market Insights
Automated Guided Vehicles Market Intelligence Report SUV Market, 2016-2026
The global automated guided vehicles (AGV) market is expected to offer a host of opportunities for companies operating in this landscape. AGV are driverless, electric motor vehicles, with a programming capability of path selection, destination, collision avoidance, and destination. AGV offer advantages in field of logistic systems by handling material flows automatically. Modern AGVs are controlled through computer systems with on-board microprocessors. There is one position feedback system which controls the
Comments about openPR
OpenPR is clearly structured and remains true to its principle of confining itself to the essential parts. OpenPR has proven to be a very good and reliable partner to our media agency: Within the shortest time the releases are online and go down well with the media representatives. The success of OpenPR is reflected in the steadily increasing number of press releases. It is good that OpenPR exists!
Ursula Koslik, Director Marketing & PR, F+W Hamburg