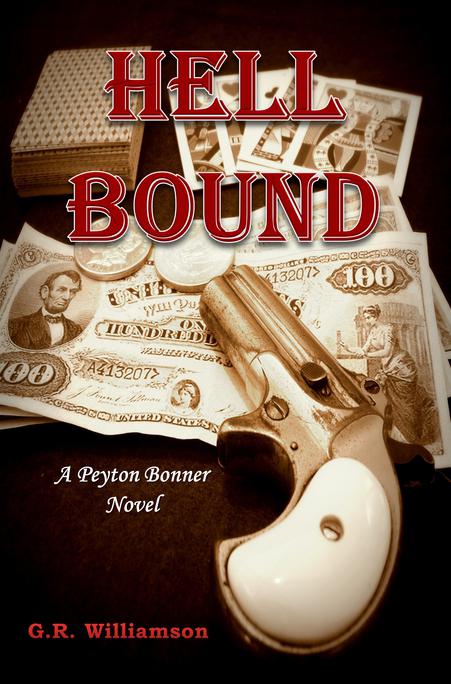 Hell Bound, the new western novel by G. R. Williamson, is being considered for a television movie project.

As one reviewer, Trudi LoPreto, said in her Five Star Review:
“Hell Bound by G.R. Williamson has all the makings for a perfect Western adventure story. If you are a fan of the Western genre, Hell Bound will not disappoint! I really enjoyed this book – it would make a wonderful TV movie. Don’t pass up Hell Bound; it is a riveting Western winner.”

In an Amazon Five Star Review, the reviewer wrote:
“Hell Bound and the characters portrayed grab you from the start and hold your interest throughout the entire story. Growing up in the Dallas/Fort Worth area I feel Mr. Williamson accurately captured the Fort Worth landscape especially the Hell's Half Acre and stockyards sights and smells. I highly recommend Hell Bound.”

Written in the classic western style, the book is a story of redemption. It’s 1883 and when the notorious faro dealer, Peyton Bonner, wins a Fort Worth hotel in a Denver poker game, he returns to Texas to claim his ownership. After being shot at the train station, he is forced to face the demons of his past.

Peyton Bonner has become a mythological legend that was manufactured by the pulp writers and newspapers when he refused interviews or photographs. With each man he killed defending himself at his faro tables, they continued to replay their made-up conjectures to the point that it was deemed the "absolute truth."

Now, tired of the rat-hole hotels, near starvation in the Dakotas, and having faced death from a ravaging fever in Leadville, Peyton wants out of the perilous life as a frontier gambler.

G.R. Williamson is a historian, a western writer, and a born storyteller. His publishing background includes: three non-fiction books on the West, many magazine and newspaper articles, and several Western movie screenplays
He is a member of the Western Writers of America and has been on panel discussions on frontier gambling. He has appeared in a television documentary on famous feuds in the Old West.

Williamson’s home is in Kerrville, Texas, where he lives with his wife and their Chihuahua, "Shooter."

His books include Notorious Gamblers of the Old West, The Texas Pistoleers, John King Fisher – King of the Nueces Strip, and Willis Newton: The Last Texas Outlaw.

Indian Head Publishing is the exclusive publisher for G.R. Williamson's books - both fiction and non-fiction.

You can edit or delete your press release Hell Bound, New - Made For Movie - Western Novel here

03-15-2019 | Industry, Real Estate & Constr …
Elan Expo
Ceramica West Africa Expo 2019
A Golden Opportunity in Nigeria Market!!! Ceramica West Africa 2019: International Ceramic, Bathroom & Kitchen Exhibition is organized by Elan Expo will take place on 27-29 June 2019 at Landmark Centre at Lagos, Nigeria. A WISE CHOICE IN AFRICAN MARKET: NIGERIA Nigeria is the rising star of West Africa with its’ huge market size. Every year 43% of total projects of Africa hold in Nigeria; under favor of its population, underground and
04-25-2012 | Health & Medicine
DictaTeam UG (haftungsbeschraenkt)
DictaTeam goes West
Dublin, Ireland / Westerkappeln, Germany: April 24th 2012 – The Irish dictation specialist Finlay Digital Solutions Ltd., Dublin / Cork / Belfast / London, will represent the Smartphone-App voice recording software developer DictaTeam UG from Westerkappeln, Germany, on the irish and british market. As a distributor, Finlay Digital Solutions will offer DictaTeam’s worldwide well renowned dictation and voice recording solution family dictate on demand to value added resellers and end
07-13-2009 | Arts & Culture
Film Classics productions
Zombies Invade West Coast For "Brain" Food
"Doctor S: The Movie" West Coast Premiere at Brainwash Drive-in Bike-in Walk-in Movie Festival WHEN: July 18, 2009 WHERE: Mandela Village Arts Center 1357 Fifth Street Oakland, CA 94607 Film Classics Productions is proud to announce that its debut feature film, "Doctor S: The Movie"), has been selected to screen at
12-03-2008 | Media & Telecommunications
Mox Telecom AG
“Go West” – Mox boosts Sales Power on US West Coast
Expansion of US-Team increases presence in biggest calling card market in the world Ratingen, Germany, December 1st 2008 – In November 2008 Mox Telecom welcomed Mr. Bjoern Risse who has been supporting the US Sales Team since. Mr. Risse, who draws on vast Sales experience in both, the Telecommunications – and the Prepaid sector, will set the stage for further promotion of Mox products in the US. After the success of its
09-29-2008 | Tourism, Cars, Traffic
Enchanted Springs Ranch
Santa Goes West
SAN ANTONIO – This December, Enchanted Springs Ranch invites families to celebrate the holidays the Old West way at its annual Cowboy Christmas. Vicki Schmidt, co-owner of Enchanted Springs Ranch with her husband Steve, calls the event a chance for guests to see the Old West in a new way. “We’re going to have the whole place decorated,” she says. “Imagine spending the holidays in an authentic Old West town
05-06-2008 | Business, Economy, Finances, B …
Didier J. Rault, International Finance Capital
From West-East Investment to East-West Investment
While many decry the spate of recent purchases of American and European assets by Chinese investors as potentially dangerous and destabilizing, the current period of East-West investment is merely part of the cycle of investment that flows back and forth from West to East and East to West. In the 1980’s, Japan’s appetite for all things American was famous. Japanese investors bought stakes in everything from U.S. corporations to landmarks such
Comments about openPR
We publish our press releases on openPR.de because we like people who are "open" - just like us.
Frank Obels, CEO, INCONET - Informationssysteme, Communication und Netzwerkberatung GmbH