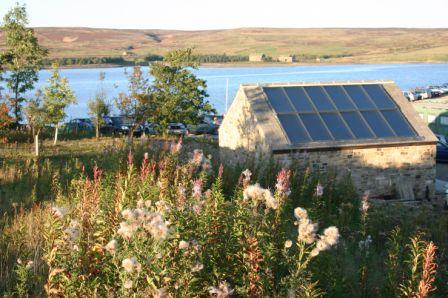 When sailors return from the cold clear waters of the Grimwith Reservoir, especially in spring and autumn, they are in need of a hot shower. The hot water they use will have been generated using solar energy by TiSUN.As part of the project which has been in planning for 15 years now, the Yorkshire Dales Sailing Club installed 24 m² of TiSUN’s large flat FI collectors on the roof of their store room. The roof faces directly south so will benefit from solar radiation all day.The solar system consists of only two large 12 m² collectors and is connected to a 4000 litre cylinder that will provide the hot water required for ten showers as well as underfloor heating. During the summer months the solar system is expected to cover 100% of the domestic hot water demand and during spring and autumn when the demand for domestic hot water is lower, the solar system will provide approximately 50% of the DHW demand.Chairman of the sailing club, Jonathan Lister, stated in his speech at the opening bash that he was delighted with the cost saving and environmentally friendly installation of TiSUN’s Collectors and Cylinder. He also complimented Geoff Miller’s (TiSUN Sales Director) enthusiastic and organized approach to the project.The TiSUN FI model collector has been designed specifically for in-roof installation, and the frame of the collector is made of timber. This made the installation very easy, once the collectors had been lifted into place, the timber frame of the collector could simply be screwed to the battens and beams of the roof structure. There are only four hydraulic connections on the collectors: One flows from the pump station, one returns to the pump station plus there is a short connector between the collectors.The installation of the “in-roof” collectors was done by the Halifax-based roofing specialists Ploughcroft Building Services, and the solar installation and integration with the existing installation was done by Solar Utilities of Rotherham.Proudly situated at the edge of the Grimwith Reservoir, high in the rolling hills of the Yorkshire Dales National Park, the Yorkshire Dales Sailing Club is the “best sailing club in the country”. It is a beautiful building that has been designed for the sole purpose of being a sailing club, and has a major renewable energy contribution thanks to solar power.For more than 20 years TiSUN has manufactured solar collectors and hot water cylinders for the rough reality: TiSUN solar systems offer 100% independent, unlimited and free energy for heating, cooling, hot water production and process heat. All our products are designed and manufactured in Tyrol, Austria, and we export 83 % of our goods. We are solar thermal experts and one of the innovators and market leaders, employing 131 people at our headquarters in Tyrol and 90 sales people in Europe. In 2008 TiSUN opened a branch in New Jersey, USA. Our products are sold in 39 markets across Europe, North and South America, North and Southern Africa and in the Middle East.TiSUN GmbH Stockach 100 A - 6306 SöllNina Karner Press- and Media Relations +43 5333 201-207 nina.karner@tisun.com

10-26-2018 | Leisure, Entertainment, Miscel …
Love Brownies
Business Expansion for Yorkshire Brownies
Yorkshire business Love Brownies based in Ilkley, West Yorkshire is expanding two years on from their first bakery opening. Love Brownies has gone from strength to strength, from starting an online brownie business ten years ago and launching a bakery two years ago, to winning numerous national food awards and now opening a number of retail experiences in Cheshire and across London. Chantal and Lee Teal, owners of Love Brownies started to
05-16-2018 | Arts & Culture
David Wood - Wood Art
Sculpting Success in Yorkshire
Secretly nestled away in the little village of Gilling in North Yorkshire is an unknown wood sculptor by the name of David Wood. David has been quietly producing beautiful wooden artifacts for 3 years in his spare time from his workshop in Gilling, occasionally showing his work in an odd gallery and selling his designs through his website. Passionate about all types of wood, David can talk for hours about the
05-04-2018 | Fashion, Lifestyle, Trends
The Yorkshire Soap Co.
The Yorkshire Soap Co. Harrogate Opening Soon
Yorkshire based luxury soap business The Yorkshire Soap Company are proud to announce the opening of their first store in Harrogate on the morning of Monday 7th May 2018 (Bank Holiday Monday). The Yorkshire Soap Co. owners Warren and Marcus started to make soap many years ago on their kitchen table as quaint gifts for family and friends, it soon turned into a business possibility and The Yorkshire Soap Co. was
03-27-2018 | Advertising, Media Consulting, …
Eyecandy Interior Design
Inspirational Ideas by Yorkshire Business
Eyecandy Interior Design of Huddersfield has a unique selling point with the company’s ‘Inspiration Hour’. Emma Gordon, Managing Director of Eyecandy Interior Design realised that interior design for some people was an unachievable dream, so designer Emma and her team decided to introduce an element to the business where interior design could potentially be affordable to all. The ‘Inspiration Hour’ is a private one-on-one booking for Eyecandy Interior Design to visit the
06-09-2016 | Arts & Culture
York Fine Arts
Clare Haley: Light of Yorkshire
With great delight, York Fine Arts proudly announces an exciting solo exhibition of original paintings by British landscape artist Clare Haley. ‘Clare Haley: Light of Yorkshire’ showcases a spellbinding collection of work that magnificently articulates the raw, dramatic beauty of landscape and light. From placid, sunlit valleys of green to suspenseful, stormy skies, the exhibition presents a spectacular selection of Clare’s paintings that tell a comprehensive story of the multifaceted
05-24-2012 | Industry, Real Estate & Constr …
What House?
New Homes Launched in Yorkshire
Linden Homes have launched a new, completed street at one of their developments in Yorkshire. The new street is located at their St. Nicholasgate development in Beverley, East Yorkshire. The new homes consist of two, three and four bedroom family homes Located close to the town centre. A total of 130 new houses for sale have been launched and come in varying architectural designs to suit a range of buyers, including
Comments about openPR
9 o'clock: discuss press release with client, 10 o'clock: submit release to openPR, within the briefest possible time release is published and displayed in a prominent place on openPR.de. I am thrilled!
Zehra Spindler, Calypso Now! - Communication Agency