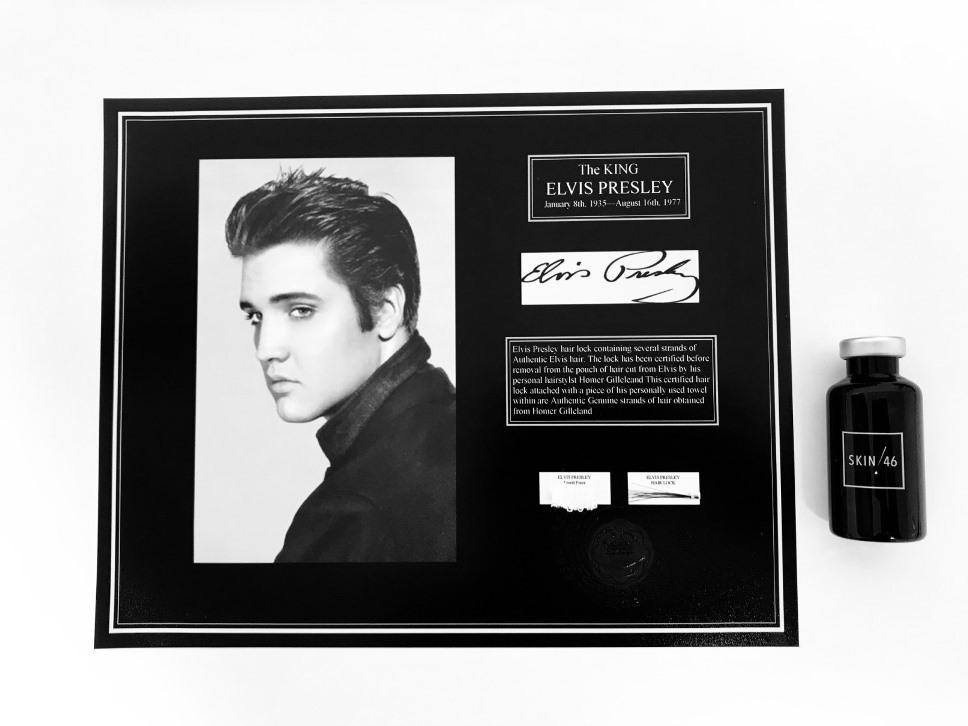 For true fans, getting to prove their love for the KING, is possible in an eye-opening, and maybe even shocking new way. Swiss start-up SKIN46 brings this to life, by giving the chance to have a tattoo made with the biogenic material of Elvis Presley or any other living Celebrity Star.Many fans would jump at the chance to have a part of Elvis under their skin forever? And show the world who one of his, clearly, most dedicated fans certainly is? Being connected with the King of Rock & Roll is now possible. In a way, nobody would probably ever expect.Swiss start-up SKIN46 has developed a method of creating a safe, totally hygienic, high-quality tattoo ink by breaking down hair into pure personal carbon. All an interested party would need is a small piece of the King's hair. Welcome to the next level of artist appreciation, where The King becomes a part of the fan for the rest of their life! And the newly tattooed person also ends up having one of the world's most interesting conversation pieces.Swiss company SKIN46 makes it clear this is quite serious, and each customer must undersign, that they are empowered to send in the hair of loved one or the person or pet they want to have them put under their skin.“We will take the care to validate every entry ourselves,” commented Andreas Wampl, Founder of SKIN46. “What a mess it would be, for example, if we received some hair from Justin Bieber from a non-authorized person, like his barber, and we manufacture a 'Justin Bieber Tattoo Ink' out of it! The person doing it could make a fortune. So, we had to establish secret-service like tools to avoid this kind of problem!”Anyhow – getting a loved one under your skin is now quite possible. Celebrity or not. A brother, father, mother, significant other, or even pet all qualify. The Tattoo Revolution goes live on June 22nd, 2018 on Kickstarter.SKIN46 AG is a Switzerland based Start-up founded in 2015. Founder & Inventor, Andreas Wampl, patented a method for producing a tattoo ink made of human and/or animal material (hair or fur).SKIN46 AG, Churerstrasse 35, CH-9470 Buchs, Switzerland Phone: +41817400295, Email: press@skin46.com

06-21-2018 | Fashion, Lifestyle, Trends
SKIN46 AG
SKIN46 Launches Kickstarter Debuting Tattoo Ink Made From Human Hair
What better way to show love and loyalty to a person or pet than to “get them under” the skin? That's exactly what SKIN46 is offering people to be a part of with their new Kickstarter to bring to market safe, high-quality tattoo ink made with human or animal hair. The tattoo world has certainly been waiting and the good news is finally here. Revolutionary tattoo ink brand SKIN46, recently announced