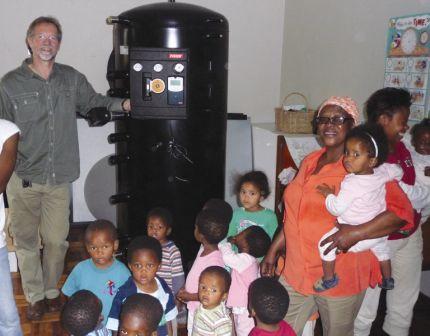 The Tyrolean solar specialist keeps it Christmas promise. TiSUN has donated a solar system to the children at the Mordecai orphanage in Port Elizabeth (South Africa) and had it fully installed, free of charge.A project to improve health conditions for orphans who have lost their parents to AIDS has now been carried out. The system became operational in early September and provides hot water for two showers and a bathtub. At present, the orphanage is home to 20 children and six carers working with the children as kindergarten and school teachers.Four TiSUN flat module collectors with a surface area of 10.2 square metres were installed on the roof of the orphanage and oriented to the north. The solar system installed was equipped with the SSRH solar station, which is monitored and maintained from Austria with the help of SD memory card data. This ensures that the head of the orphanage does not require any technical knowledge to use the system. It was possible to realise a full solar service in South Africa from the Tyrol courtesy of this system. A fresh water tank with a capacity of 800 litres enables all the children to use the service water.Robin M. Welling, TiSUN director of sales, logistics and customer service, personally asked all the employees involved to fully support the social project and monitored its progress. The system was transported approximately 15,000 kilometres by ship to South Africa at the end of June. This project was coordinated and managed locally by Nova Energy, a Pretoria-based company which is TiSUNs distribution partner in South Africa.“There was great excitement at the orphanage, particularly among the children.” To protect the system against theft – a very serious problem in South Africa – the children’s classroom was cleared out so that the goods could be stored there temporarily. During this time, the kindergarten and school lessons took place in the garden. The first article in a major regional weekend newspaper about the solar installation for the orphanage generated interest in the area. Neither the children nor the adults at the orphanage really knew or understood what was going on. “The children stared in disbelief at the huge, black 800-litre tank in particular,” says Vincent Walbaum, managing director of Nova Energy when describing the curiosity surrounding the installation of the system.“All the parties involved are overjoyed, especially the pastor Geert Jansingh and the home supervisor Beauty who was in tears several times thanking Bernd Walbaum and TiSUN and including us in her prayers – for her, it was a miracle,” adds Walbaum.For more than 20 years TiSUN has manufactured solar collectors and hot water cylinders for the rough reality: TiSUN solar systems offer 100% independent, unlimited and free energy for heating, cooling, hot water production and process heat. All our products are designed and manufactured in Tyrol, Austria, and we export 83 % of our goods. We are solar thermal experts and one of the innovators and market leaders, employing 131 people at our headquarters in Tyrol and 90 sales people in Europe. In 2008 TiSUN opened a branch in New Jersey, USA. Our products are sold in 39 markets across Europe, North and South America, North and Southern Africa and in the Middle East.Stockach 100 A - 6306 SöllNina Karner Press- and Media Releases +43 5333 201-207 nina.karner@tisun.com

You can edit or delete your press release Last Christmas here