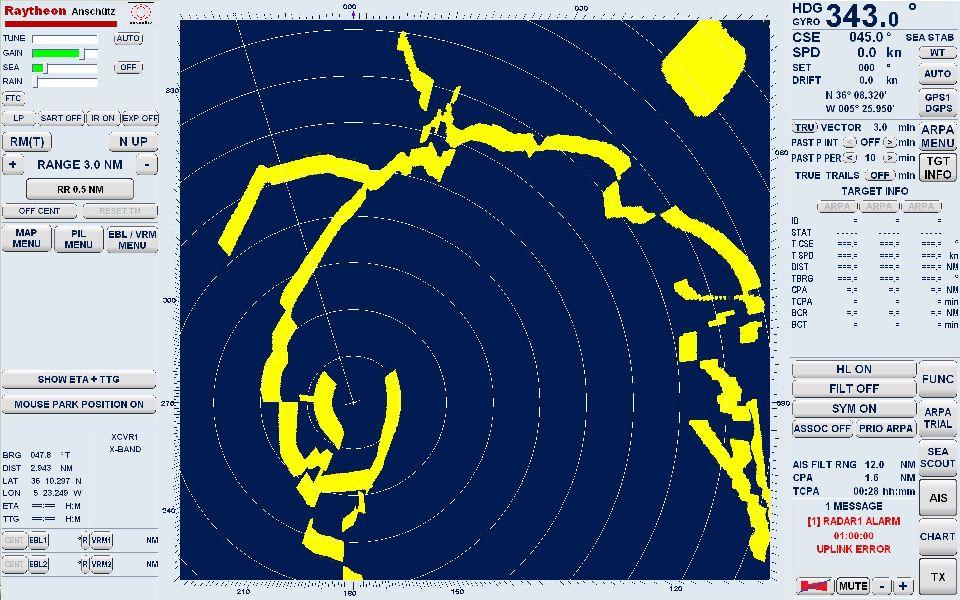 Raytheon Anschütz has been selected by prime contractor Lockheed Martin Canada to supply navigational radars for the mid-life upgrade of the Canadian Navy’s Halifax-class frigates. The delivery is scheduled from 2010 to 2015 to Canadian shipyards in Halifax and Victoria.Under the contract, Raytheon Anschütz will install the latest version of its NSC radars on board the frigates. Besides high-performance detection capabilities and advanced anti-clutter function, the radar also features new radiation control and pulse blanker interfaces.The X-/ and S-Band radars will be integrated into the ship’s new command and control system, the CanACCS 9LV, the navigation distribution system and the Canadian Navy electronic chart system SHINNADS. The Canadian Navy has already gained experience with the navigational radars from Raytheon Anschütz on board of their eight ORCA class training ships. In addition to the radar installation on board, the contract includes one complete system for a land-based test and support facility at the Canadian Naval Base in Halifax.Raytheon Anschütz will accompany the whole program with program management according to complex Canadian Navy requirements. This service also includes budget control, system specific documentation, integrated logistic support and extended system integration tests.Raytheon Anschütz has delivered more than 600 customized Integrated Bridge Systems for commercial and naval ships. The company has a broad range of own products, which covers e.g. gyro compasses, ring-laser gyros, autopilots and steering control systems, radars and electronic sea charts (ECDIS). All activities such as R&D, system engineering, production, sales and service are concentrated at one location. Raytheon Anschütz cares for its systems on board of more than 25,000 vessels worldwide and maintains a service network with more than 200 service stations alongside the most important shipping routes of the world. Raytheon Anschütz is a subsidiary of the Raytheon Company (Waltham, MA, USA) and a part of the Integrated Defense Systems department (IDS, Tewksbury). The company was founded in 1905 as Anschütz & Co and currently has more than 500 workers. All of the essential components for safe ship navigation are developed, produced, and meticulously tested at the headquarters in Kiel.Raytheon Anschütz GmbH Zeyestr. 16-24 D-24106 Kiel Germanywww.raytheon-anschuetz.comPress Contact: Martin Richter Marketing Support Manager Tel.: +49 431 3019 512 Fax: +49 431 3019 94512 E-Mail: martin_richter@raykiel.com

08-22-2018 | Industry, Real Estate & Constr …
HARP
Ukrainian HARP enters Canadian market
Within demonstration tour Discover HARP, Kharkov Bearing Plant (HARP) starts to move further to the Canadian market. On September 11-13, the leading domestic producer of bearing products will take part in the largest agricultural exhibition of the North American continent – Canada's Outdoor Farm Show. HARP will become the only Ukrainian producer, which will present the bearings for agricultural sector at this event. “70-years production experience allows us to satisfy the
01-09-2018 | Media & Telecommunications
CarsAndCars.ca
Comprehensive Canadian Car Dealer Locator Tool
On CarsAndCars.ca car buyers from all over Canada can use the new car dealer locator tool that gives them a wealth of results and possibilities. An important part in the process of buying a car, new or used, is choosing the right car dealership to deal with. The right car dealership could have a multitude of meanings, depending of what it is important for each and every buyer. Some of
09-20-2013 | Leisure, Entertainment, Miscel …
Okinshaw Water Company Ltd.
About The Canadian Ice Water
The Canadian Ice Water is associated with an artesian aquifer located in the Selkirk Mountains, near Nelson, BC, Canada. The water from the aquifier was analyzed and indicated that it was of exceptional quality – mildly alkaline water with a balanced mineral content making it a rare and valuable product. Deep sourced natural artesian water that is both alkaline and mineralized and associated with a bulk water and small bottle
09-13-2013 | Energy & Environment
Rudnicki Industrial
Canadian recycling technology goes global
Thunder Bay, ON – Rudnicki Industrial unveiled the latest model of its Strap Eater industrial strapping chopper today; Just one of many green recycling products being developed by the small Canadian machine shop. With the ever-increasing demand for eco-friendly products, the shop is helping to meet the growing global need for green recycling technology. The green market is still young, but is growing steadily as companies recognize government and consumer demands
08-26-2013 | Science & Education
Fraunhofer IAO
Canadian collaboration kicks off
Fraunhofer IAO starts working together with McMaster University in Hamilton on research transfer Fraunhofer IAO and McMaster University in Hamilton, Ontario are pooling their expertise in the field of technology and innovation management. In future, the partners will collaborate on both research and teaching in order to boost the transfer of research findings and innovative solutions into business practice. Collaborations with commercial enterprises and research institutions around the world are
03-27-2012 | Business, Economy, Finances, B …
IAGO Limited
IAGO Limited Canadian Oil Exploration
Decision makers across Canada are in talks about the importance of a national energy strategy while the full potential of Canada’s energy sector is completely untapped and not moving forward at a quick enough pace. IAGO Limited points out Nunavut as a perfect example. This is a territory making up twenty percent of Canada. Nunavut could be the future of the Canadian energy sector with an estimated twenty-five percent of
Comments about openPR
9 o'clock: discuss press release with client, 10 o'clock: submit release to openPR, within the briefest possible time release is published and displayed in a prominent place on openPR.de. I am thrilled!
Zehra Spindler, Calypso Now! - Communication Agency