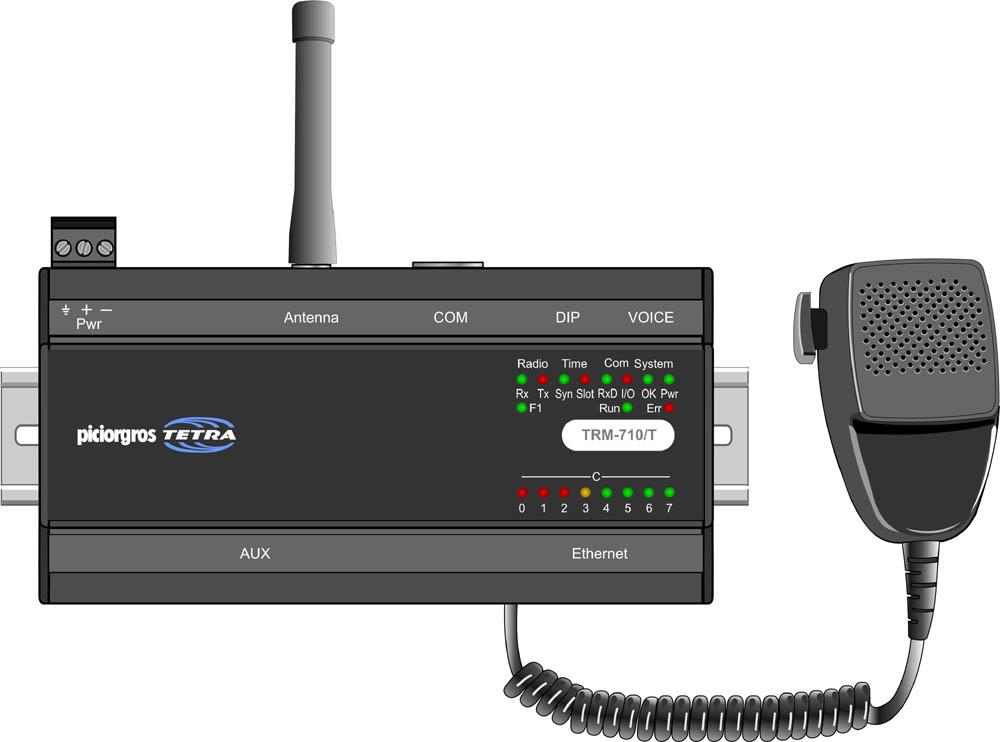 TMO-100, Radio modem for data communication in Tetra infrastructuresDifferent applications, and different geographical regions, have different requirements for automation protocols. Energy utilities in Germany and Europe use common standards (IEC 60870-5-101 or IEC 60870-5-104). In Asia and the U.S. they generally use the Modbus RTU or DNP3 protocol. Less well known is the PakBus Sinaut protocol from Siemens, which is primarily used in the water and sanitation industries.The Modbus RTU Protocol is particularly good for slow or wireless transmission paths, due to its user-friendly and solid structure. However, compared to other protocols, the Modbus RTU Protocol has the disadvantage that the outstation exclusively works by polling, which is the cyclical polling of each individual station by the master station. Other protocols have the advantage of the outstations using event-driven messages, rather than waiting to be polled by the master. Through this process, alarms can be reported independently from the polling cycle of the Master device. The TETRA TMO-100 supports pro¬tocols such as Modbus, PakBus, the Sinaut protocol from Siemens and many more. The TMO-100 does not generally (but can if required) work with GISSI, but each single data set will be sent to the one outstation it is addressed to. This is a major benefit of TETRA infrastructures, due to the high network load when sending group messages, rather than selective messages. Another feature that reduces the network load is the integrated modified LZ77 data compression mechanism. For the Modbus RTU Protocol the TMO-100 offers a special option to make it possible to process event-driven alarms on a spontaneous basis. For this the outstations can be ordered with an optional E/A Board in addition to their serial interfaces. These inputs can be used to automatically send status alarm messages to the master station. This master station stores the alarms in Modbus registers, where they can be accessed at any time though the connected master-PLC or the SCADA Server. This makes it possible to react to alarms or malfunction messages at any time, in the same way as unsolicited messages.In addition to the serial asynchronous protocols, the TMO-100 can also process UDP- and TCP-protocols. In this case, the device operates as a TETRA router. After the device is turned on, a PPP-connection is automatically established to the Tetra infrastructure, and the unit receives an IP-Network address from the Tetra Switch. The TMO-100 immediately send IP data from the local Ethernet interface to the TETRA-IP-world, and vice versa. For this the TMO-100 uses NAT, Port Forwarding and Port Translation, which turns the device into a fully-featured TETRA-router. For the user connected on the local IP-Port, the Tetra infrastructure is not actually visible. He simply connects the PLC to the Ethernet port and, after setting up the IP-Address, will be able to communicate with other devices or the SCADA Server within the TETRA infrastructure (and also, if enabled, beyond that). The device can be configured either via the embedded Web server, the Modbus RTU Protocol using its serial interface, or the Modbus/TCP via its local Ethernet interface, or remotely via the TETRA infrastructure. For applications that need embedded digital or analogue inputs and outputs (I/O) within the device, the TMO-100 can also be delivered with an optional I/O-board with 16 digital inputs, 8 (optional 16) digital outputs, and 4 analog inputs (12 Bit resolution, 0-20mA/4-20mA). As well as the 16 binary inputs, the device is equipped with 8 event counters and 8 timer counters. All inputs and outputs are isolated. Access to the inputs and outputs takes place via the Modbus-RTU or the Modbus/TCP Protocol, and can be realized locally or via the TETRA infrastructure, using either SDS or Packet Data. Another important characteristic for data modems is the ability to set up a voice connection. Using an eight-pole RJ45 plug, an RSM (remote speaker microphone handset) can be attached to the TMO-100. When the PTT (push to talk) button on the RSM is pressed, the modem disconnects all data connections (SDS, CSD, PSD) and automatically switches into voice mode. A voice call is set up to either a preset ISSI or GSSI. After finishing the conversation, the data communication will automatically be restarted by the device. When switching from voice mode to data mode or vice versa, the modem can still send a status message to the control center.Since 25 years the company is successful in producing and distributing radio telecontrol, especially radio and radio-modem solutions for data transmission.Since 1996 Funk-Electronic Piciorgros GmbH has focused on automatization, water and waste water control for electricity and utility companies and the industry in general.Funk-Electronic Piciorgros GmbH Claudiastr. 5 51149 Cologne-Porz, GermanyTel. +49 2203/ 911 770 www.tetramodem.com

01-24-2013 | Media & Telecommunications
Funk-Electronic Piciorgros GmbH
Piciorgros’ TMO-100 TETRA Data Modem Approved for USA and Canada
Funk-Electronic Piciorgros GmbH just received their approval by the FCC for the USA and by the Industry Canada in Canada for their TMO-100 TETRA data modem. After many successful years in the TETRA industry in Europe as well as Asia and Africa, Piciorgros is now keen on entering the North American market. The TMO-100, a SCADA and telemetry data device is the ideal solution for any application in utilities, gas and

06-05-2019 | Industry, Real Estate & Constr …
Chipkin Automation Systems
New CAS Gateway Creates BACnet IP, Modbus TCP, Modbus RTU Points for Real-Time W …
Chipkin Automation Systems Inc. is proud to announce a much-anticipated product release. We have developed a custom driver for the CAS Gateway that allows users to access the Darksky weather API to create BACnet IP, Modbus TCP, Modbus RTU points for weather values. Vancouver, BC, Canada - June 3rd, 2019 - Chipkin has developed a custom driver for the CAS HTTP JSON Gateway (CAS 2700-79) which allows it to poll
10-26-2017 | Industry, Real Estate & Constr …
AMCI
Modbus-RTU Added to Integrated Motion Control
Terryville, CT – Advanced Micro Controls Inc. (AMCI), offers built-in Modbus-TCP (also called Modbus over Ethernet) communication in all of their integrated motion control products. Modbus-TCP is a popular Industrial Ethernet network designed to allow industrial equipment such as Programmable Logic Controllers, computers, operator panels, motors, sensors, and other types of physical input/output devices to communicate over an Ethernet network. AMCI Integrated Motion Control products with Modbus-TCP include: · 2-in-1 Drive/Controllers · 3-in-1
06-14-2017 | Industry, Real Estate & Constr …
CAS DataLoggers
Novus FieldLogger for Modbus Applications
Flexible Data Logger Records Analog & Digital Signals With 8 universal channels for connection with different sensor types, the Novus FieldLogger is an ideal Modbus RTU input device, for example to transmit data as part of a SCADA system. Designed to handle any analog input, the FieldLogger can operate linked to a PC for online recording/supervision or as a stand-alone data logger with real-time and graph capabilities. 8-Channel Modbus RTU With the
12-07-2016 | Industry, Real Estate & Constr …
CAS DataLoggers
Custom Modbus Systems Monitor Temperature and More
CAS DataLoggers Designs and Delivers Custom Systems If you need a data logging system that meets your I/O requirements, such as a distributed system to monitor multiple points spread across a factory floor or several buildings, call CAS DataLoggers! We can design and create a custom data logging system for your application by integrating Modbus-based devices from different manufacturers. Customize Our Systems to Your Needs The Modbus protocol allows communication
04-20-2016 | Industry, Real Estate & Constr …
CAS DataLoggers
Modbus Networking in a Hospital
Monitoring Freezers for Temperature of Vaccines CHESTERLAND, OH—April 20, 2016 Recently a hospital required an automated temperature monitoring solution in order to measure and record the temperature of 50 freezers storing temperature-sensitive life science products. These freezers are located throughout the facility on 3 separate floors, but users need centralized access to all the temperature data. The hospital’s IT department also had a key requirement that they should be able to monitor
12-10-2011 | Industry, Real Estate & Constr …
AMCI
Modbus-TCP Stepper Indexer/Drivers Now Available
Terryville, CT – Advanced Micro Controls Inc. (AMCI) has enhanced its industrial Ethernet stepper indexer/drives to include Modbus TCP connectivity. This additional protocol greatly extends the potential of AMCI’s SD31045E & SD17060E in PLC-controlled applications. The powerful (4.5 & 6.0 Amp RMS) AC line powered stepper motor controller/drivers eliminate the need for a plug-in card, and are easily configured through the host PLC software. AMCI’s E-drives offer
Comments about openPR
OpenPR is clearly structured and remains true to its principle of confining itself to the essential parts. OpenPR has proven to be a very good and reliable partner to our media agency: Within the shortest time the releases are online and go down well with the media representatives. The success of OpenPR is reflected in the steadily increasing number of press releases. It is good that OpenPR exists!
Ursula Koslik, Director Marketing & PR, F+W Hamburg