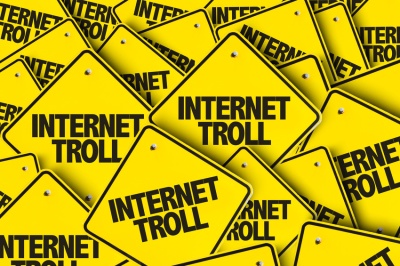 They exist everywhere on the Internet, and in this article will be looking at the phenomenon, the people behind it and the ways you can combat Internet trolls.

What is an Internet Troll?

If you want to know where to find a mythical troll, the best place to look is under bridges. But just like the mythical troll. There are also places where Internet trolls prefer to hang out. These are places where they can easily post content under an anonymous pseudonym. That means that Internet trolls do not usually hang out in online community comment sections where every comment is moderated and has to be approved. They want to be able to post without any real delay and without moderation, and without anyone knowing who they really are.

One of the most common places to find Internet trolls in the comments section of the YouTube video. You can find lots of trolling comments below popular videos. But even more prevalent on YouTube are Internet trolls that hang out in the live chat section of YouTube videos that are streaming live. These live streams rarely have moderators on YouTube, and are therefore the perfect place for the Internet troll. You can also find trolls on forums, the comment section of video gaming websites, articles on major newspapers and any messages in an online forum where they can people troll. They will visit just about anywhere that people congregate to discuss things.

Now, let’s take a look at a few types of Internet trolls that are out there. These certainly do not describe every Internet troll out there, but they do cover the majority of them that hang out in the comment section, on social networking sites of social media platforms or the chat room.

The first type of Internet troll is called the insulter. An insulting troll simply hates certain people and starts flame wars with them on message boards and comment sections. They may not even have a reason for it, they just enjoy spreading hate. They may do battle with everyone on the message board, calling them names, accusing them of things and trying to get a reaction.

Another type is the debater. The debater troll is always looking for an argument. They don’t even care what the argument is. If you argue one side, they will usually argue the other. They can break down a well-researched article and use generalizations and faulty logic to make it seem false.

The grammarian is the next type of troll that we will discuss. You will find the grammarian on message boards, often correcting people spelling or grammar. What is ironic about this is that they are so often wrong about the rules of grammar or spelling, and suffer from the same problems themselves.

The offended troll is a type of troll that will take things out of context or completely misread a situation or article and become offended by it. They can become offended by even a simple sentence. They may go off on huge rants in their troll comments and it is unclear whether or not they are actually offended or just pretending to be.

The big mouth troll likes to show off how much they know, even if what they actually knows very little. This type of troll loves to share their opinions anywhere they can, and usually lays them out in great detail with multiple paragraphs. They always claim to be more important than they actually are, sometimes insinuating that they are secret agents or with the government.

The profanity troll likes to use as many curse words as possible. They also like to use all caps when they are posting on boards and comment sections. The more people that become offended by their profanity, the happier they are.

The single response troll likes to get on message boards and post one word replies to everything just to be annoying. You can usually ignore them, and most people do not even see them as trolls. They like to be disrupting normal on topic discussion with one word answers.

Finally, there is the spammer troll. The spammer troll may be the worst offender among all of the trolls because they are there simply to get people to buy a product or service that they are going to make money from, visit their own page or do something else that are going to benefit them. The trouble is, they will be willing to do just about anything to get someone to bend to their will, including hijacking a very sensitive discussion such as a new story on a recent murder.

There are lots of theories out there as to why trolling happens so often on the Internet. Obviously, one of the benefits for the troll or is that they are mostly anonymous. Unless they do something really bad that is going to get the attention of law enforcement, it is very difficult for someone to track them down.

Psychologists list a number of reasons why Internet trolling happens. You can subscribe to as many of these theories as you want, but the bottom line is that trolls just want to act badly. There are virtually no consequences for trolling thus far, and the worst that can happen is that they get banned from a particular site. Some trolls may actually believe in their arguments and are expressing themselves passionately, but do not have the social skills to do so constructively.

Many trollers are simply unhappy with their own life and so they try to make the lives of other people miserable. This is classic bully syndrome, and since the Internet does not require height or strength or any of the factors that might make a physical bully, there are many more trolls out there than there are bullies in the world. In fact, many trolls may have been bullied themselves.

Expert Tips: How to Deal with Internet Trolls

Here’s some expert tips on dealing with Internet trolls, so the next time you encounter one you will know what to do and how to go about your discussion without them affecting you.

An Internet troll is simply a person that gets on the Internet and goes to message boards, comment sections or other anonymous discussion forums and tries to get a reaction from the other people having a discussion there. They have various tactics that they use, so it is easy to recognize them when you see them. There are several different types of Internet troll as well, based upon their particular method of trolling. The best way to deal with these people is to ignore them or report them to the site administrator, or to law enforcement if necessary.