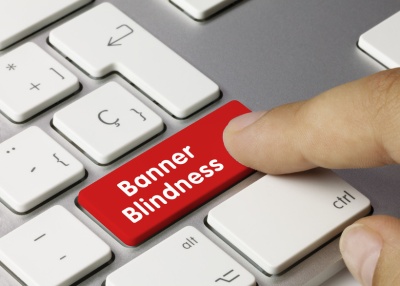 Online marketing and the problem of banner blindness. (© Momius - Fotolia.com)

Banner blindness explains why your ads may not be getting seen. This is an important concept to understand for your marketing and in this post, you’ll learn how to avoid it.

Banner blindness is a term used in marketing to describe the fact that many people have now become desensitized to banners.

A general aim of any form of advertising, is to make sure that people see the ads that you have created. This should then help to increase brand awareness but it might also lead to direct sales if people click on the ads or look up the site when they get home. To this end, most banners will do everything they can to hijack the human salience network – to send signals on an unconscious level that they are important and that they demand attention.

For instance, we will often use

openPR tip: High contrast colors often look ‘out of place’ in our environment and this causes us to pay instant attention to them. In the wild, the things that would use high contrast colors and stand out from the background would typically include things like snakes or fires!

But more importantly, whenever we see a human face, this will almost always direct our attention that way. That’s because other humans have incredible survival importance to us – whether they are

– all these things have importance to us. We rely on other people for learning, for guidance, for safety and for access to resources.

The Psychology of Attention

What you need to recognize when using banners then, is that the human brain can only pay attention to so many things at once. Often this is described as a bottleneck – with a huge amount of information and stimuli coming in through our senses at any one time, but only so much of it being considered relevant by the filter of our brain.

What makes the cut here is going to be influenced by a huge number of different factors, including

However, there are also certain things that will be universally considered relevant by our brains and these are things you can exploit when trying to attract attention universally.

openPR tip: One such example are things that are coloured red and black or yellow and black. This is the colouring that nature has chosen to represent danger and thus we have evolved to be weary of it. Of course this is the reason that so many signposts are red and yellow.

Also useful is contrast – anything that stands out against its background. You can take advantage of this by positioning your banner in the right position on your website – where it will contrast more with the background and the images around it.

Online though, every single advertiser is using the precise same technique. And even when we walk down the road, billboards and banners are designed to do the same thing.

Likewise, cars drive past with bright lights, hundreds of people walk towards us and we probably have music playing in our headphones. This all causes sensory overload, to the point where our brain is saturated with information and is unable to switch between different tasks or even care.

This is where ‘banner blindness’ comes in. We’ve seen the same old tricks so many times that the brain now knows to tune them out. This is just like the ticking of a clock which may seem irritating at first, but eventually fades into the distance and stops being noticeable.

There is also an interesting and concerning biological impact that comes from this constant bombardment too. When we see a bright light, movement or someone heading toward us, our body responds by triggering a slight ‘fight or flight’ response. We release hormones and neurotransmitter that increase our focus, our awareness and our reflexes. But this also raises our heart rate, it also thickens our blood and it also increases our sense of stress and panic. That’s because all these things tell us that our attention and focus is required.

When this happens constantly, we can struggle to return to homeostasis. Everything is loud, moving, unusual, potentially dangerous or profitable… and all those things wear us out. Eventually, this can lead to adrenal fatigue. Here, our body has spent so long in a state of arousal that it has actually lost the ability to continue producing adrenaline and other arousal-chemicals. The result is that we are reduced to a worn out state where we can no longer muster energy or enthusiasm for anything.

This can also cause chronic stress. Stress in the short term is intended to help us to deal with an immediately threatening situation. In the wild, stress would never have continued for long durations of time. In these situations, the stress can take a serious toll on our bodies and increase the chances of

This is one way that signs can attract attention even on the periphery of our vision, but there are some other more exciting and less common techniques that can also be employed. One is the use of optical illusions – that appear three dimensional or that leap out of the background when observed from a particular distance or spot.

Some roads for instance now have decals painted of them of people crossing. These decals are elongated and skewed – looking like nothing much up close – but from the right angle and distance they look 3D and almost seem to 'pop' out of the road causing traffic to slow down and act more cautiously as they approach.

This effective technique demonstrates just how effectively you can get a warning to pop with the right understanding of the human eye and brain. We can do similar things with banner ads, whether that means making it appear as though

openPR tip: Another interesting ploy is to use the opposite approach. With so many banners making noise to be noticed, consider making less noise in order to become a void and an oasis of calm. For example, if your ad uses very small text, it might make the audience curious enough to lean in closer and to inspect what is written. Curiosity is an incredibly powerful tool for getting us to pay attention to anything, which is precisely why clickbait works so well by using phrases and questions that lead the audience to question what will happen next.

With so much information assaulting our senses at any given time, banner blindness is a very real issue. This is why it is so important to be more creative and original. Keep in mind that what stands out will be anything that is different. The black sheep stands out!

And keep in mind how this will impact on the viewer. Yes, you can shout loudest and potentially get noticed – but this is unnecessarily distracting and could potentially be stressful for your audience. At what cost visibility? Consider how being too noisy can also hurt your branding. Sometimes less is more.