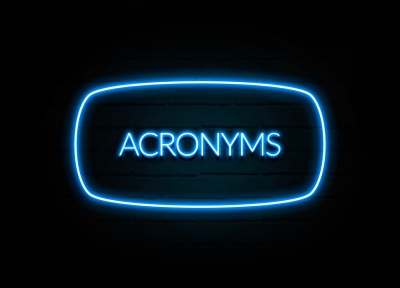 An acronym is a word that is made up of letters, and each of those letters stand for a larger word. Examples include FBI (Federal Bureau of Investigations), CDC (Centers for Disease Control and Prevention), and PR (public relations). An acronym is an abbreviation that is formed from the beginning letters of a collection of words, and the abbreviation is pronounced as its own word. The abbreviated word that is formed as a result of an acronym can be a completely new word, or it can be a word that already exists. In many cases, acronyms are used so frequently that the word they form becomes a common part of everyday language.

Some experts state that only abbreviations that form words that can be pronounced are considered acronyms, such as RADAR (an acronym that stands for Radio Detection And Ranging.) According to this school of thought, abbreviations like ETA (estimated time of arrival) are not considered acronyms because the letters do not form a word, but are rather the letters are pronounced individually. However, many disagree with this idea, stating that any abbreviation that is formed from the beginning letters of a phrase or a series of words – whether it is pronounced as a single word or not – is an acronym.

Are All Abbreviations Acronyms?

Despite the above-mentioned idea that any abbreviation that is formed from the beginning letters of a serious of words is considered an acronym, sometimes this is not always the case. Sometimes, abbreviations that use the first letter of every word in a phrase are called initialisms. While some initialisms do become acronyms because they are used so frequently and are often pronounced as words, such as ASAP (as soon as possible), abbreviations in which each individual letter is pronounced, such as A.M. (ante merdiem or before noon) and P.M. (post merdiem or after noon), are considered initalisms.

There are other types of abbreviations, too, some of which include:

The History of Acronyms

Acronyms have long been used in various languages throughout history. In fact, the use of acronyms dates as far back to the BC (before Christ) Rome. Then, the official name of the Roman Empire was Senatus Populusque Romanus, which was commonly abbreviated as SPQR. In fact, inscriptions found on many ancient coins, stones, and artwork included abbreviations as a way to save space. Acronyms were also used by the ancient Greeks and Jews. The Hebrew language contains several acronyms that were pronounced as words.

openPR-Tip: In the English language, the use of acronyms didn’t become commonplace until the early and middle part of the 20th century. It was then that the use of acronyms became commonplace in business. For example, some of the best-known commercial examples of acronyms include Sunoco (which stands for Sun Oil Company) and Nabisco (which stands for National Biscuit Company). In fact, the process of creating and using acronyms that can be used as words is a phenomenon that is directly linked to 20th century vernacular.

Current Use and Purpose of Acronyms

In modern language, acronyms are used the same as they were throughout history. These abbreviations are used to shorten the names of organizations and businesses, as well as long words and terms that are used frequently used. The purpose of acronyms and other variations of abbreviations are to make it quicker and easier to pronounce a series of words or a phrase. For example, it’s much easier and faster to say the word “LASER” which is actually an acronym, than it is to say Light Amplification by Stimulated Emission of Radiation.

In the 21st century, the use of acronym has become even more commonplace, thanks to the popularization of text messaging on mobile devices that are outfitted with Short Message Systems (the abbreviation for which is SMS). The reason being that SMS limits the size of messages to 160 characters and in order to fit that character limit, acronyms have been created. Some of the most common acronyms or abbreviations used in text messaging include LOL (which stands for laughing out loud), BF (which stands for boyfriend) and ROFL (rolling on the floor laughing).

Acronyms in the News

Because they make words and phrases that are commonly used easier and quicker to pronounce, the use of acronyms have become commonplace in the news. In fact, many of the news network channels use acronyms for their names.

Given the popularity of acronyms and how commonplace their use has become in the English language, some people believe that the word “news” is an acronym itself. In fact, in 2017, a Twitter user stated that news is an acronym that stands for “notable events, weather, and sports”.

News is supposed to describe events that occur in the world in the present or that have happened in the immediate past – hence the reason why it is called news. If the news refers to any event that occurred a long time ago, there has to be some type of information that links or anchors the event to something that happened in the present day to make it more immediate and relevant.

Whether you work in the

or any other industry, it is important to have a firm understanding of acronyms. This is because these abbreviations are so commonplace that without understanding them, you may not be able to decipher important information. Furthermore, because acronyms are so popular and used by so many people, it is important to know what they mean so that you can use them as a way to relate to other people.

Acronyms that are Specific to Social Media Networks

These acronyms include the following:

Acronyms that are Commonly Used on Social Media Networks

The following acronyms are commonly used on specific social media networks, or they are used on all of them. They include:

There are several acronyms that are social media marketers use, too. Some of the most common include: