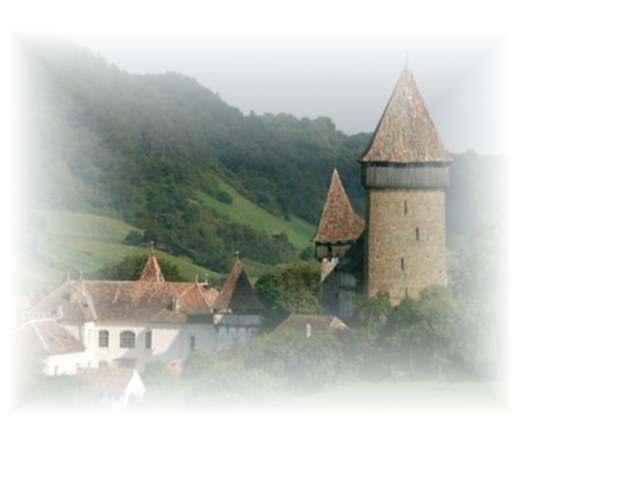 Ziarul de Sibiu June 7th 2006 God is dead, the atheist told me. I told him: That’s strange, I have just talked to Him. Yesterday’s relics, the communists and the atheists, still exist in great numbers in Romania, this most wonderful and still so morally destroyed country. They still spread their poison, they haven’t learned anything yet, they do not want to accept the new reality. They live by the former patterns, by the former doctrines, by the former hatred and eternal contempt towards people and God. But they are still here and too many of them occupy important positions. I am currently experiencing all this myself. I am harassed and humiliated and even the judiciary police pursues me for having restored the church, a historical monument of the 14th century, and for having brought it back to life, not as a historical building but as a house of God, as a temple of our God. We naturally have to take into account tradition, a historical monument must obviously be presented like that nowadays in order for us to see both the history and the present. We are only human, believers of this century. We are respectful We respect the heritage of our ancestors, but we live today and our ancestors do not ask us to give up progress and modern technique. And neither does God. I do not want to get into details and tell you what hilarious things I am being reproached. Yes, the arguments go as far as statements of the kind: ”We should have left the church deteriorate completely...” Those that say this betray themselves as being former comrades bound by the same principles, who do not care to help people but wait for the right time to thwart their plans, to stop their ascent. In God's eyes they are nobodies, they are lost and corrupted. And their doctrine is perverted. ”Tribuna” newspaper (formerly a newspaper of the communist party) dared even to announce on its first page ”Don Bosco mutilated the Church”. They are the ones They are the ones that are invariably ignorant and say that God is dead. They become horrified when the church fills up with life again. You have no idea that Don Bosco is a saint who dedicated his life to the poor and to the abandoned children, who built many churches and who now lives in Heaven. How could he mutilate a church? Are the journalists of ”Tribuna” illiterate? No, they either cannot or do not want to make a correct journalistic research, according to the ethics of their profession. They ignore the fact that on Sundays hundreds of believers come to the divine service from the Ecumenical church of Iacobeni. Or maybe this is something that bothers them terribly. They ignore the congratulations and praises of hundreds of international tourists who write messages worthy of being highlighted in the guest book. Yes, you can cry out all you want, you poor spirits. It is not God who is dead, but your communist words and intrigues. We are all acquainted with the human typology that does not live in reality. These people have withdrawn into their fantasy and have built an imaginary world where there is no God, a world similar to the one they accepted without checking it, and mistake this imaginary world for reality. They transform doubts into facts, their suspicions are certitude and they want to turn all their untempting dreams into reality. God is dead They say ”God is dead”. They mistake their lack of belief for the reality and live in an imaginary world. The situation is similar to the one from the psychiatry hospitals: patients consider themselves normal and think that the doctors and the nurses are the insane ones. Oh, how I pity you, you former Reds. How many of you are there still in the editorial offices of newspapers? You have caused so much affliction and you continue to scream: ”Don Bosco mutilated the church”. When will you give up? When will you finally make room for new people, especially young people? Anyway: any true Christian will welcome you with his arms wide open, will be glad to tell you Christ’s message and will invite you to see that God is truly alive and that talking to Him and following His word is an accomplishment. When will you finally understand that the old church of Iacobeni is first of all a house of God, where one can pray and talk to God, and that our ancestors join us in this prayer out of the ancient walls. But that’s strange, I said, I have just talked to God! Oh, yes the communist obviously does not have God’s phone number. But I would have gladly given it to him. I wish you a great weekend, full of peace and a refreshing Sunday service. Everything will be all right. Remain loyal to me. Yours truly Pater Don Demidoff ICCC Priest of the Independent Ecumenical Cathiolic Church of Iacobeni *International Council of Community Churches USA Father of the Homeless Children of Cincu www. depeschedondemidoff.. com dondemidoff@web. de The Ecumenical Divine Service for everybody Sunday at 11 o’clock The Divine Service for Children Sunday 2 p.m. in the Church of Iacobeni, 13 km from Agnita. www.depeschedondemidoff.com dondemidoff@web.de Humanitar work in Romania Pater Don Demidoff ICCC 507045 Cincu Rumänien dondemidoff@web.de www.depeschedondemidoff.com

You can edit or delete your press release Sunday word: God is dead here

02-13-2006 | Politics, Law & Society
Fundatia Casa Don Bosco
The priest of Thorns
Newspaper “Ziarul de Sibiu” 23.-29.Januar 2006 Translation from Romanian into English Pater Don Demidoff, the philanthropist of Iacobeni The Priest of Thorns „For us, Pater Don Demidoff is both our mother and father. It is with him that we discuss the problems we have, he helps us grow”, Alexandru says about the priest who ever since 1991 has been fighting against mentalities, institutions and individuals in order to help the Romanian homeless

09-11-2017 | Politics, Law & Society
Advent Messenger
Trump’s National Day of Prayer: Is God Listening?
President Donald Trump issued a proclamation this past Sunday to be the National Day of Prayer for Hurricane Harvey victims. He called upon all Americans and all houses of worship to unite in prayer to God for the nation and to assist those suffering from the consequences of the storm. Even though this is a welcome step in the right direction that we acknowledge God and the significance of prayer, it
09-13-2016 | Associations & Organizations
A Work of Hope
EVANGELIST PASTOR JOHN COLLINS WALKS FOR GOD BECAUSE "GOD MATTERS"
Wheatland, Wyoming: Evangelist Pastor John Collins, head pastor of Love That Cross Ministries, is recognized as one of the 15 most influential pastors living in the United States today by Inspirational Faith Magazine. His faith is unwavering and inspirational. His preaching is spiritual and moving. His style is vibrant and animated. He is a fresh and honest example for evangelism, revival, and renewal that is sweeping the
03-01-2013 | Arts & Culture
Jerry Pollock PhD
God And Science: Jerry Pollock PhD Explains Why Science Is, In Fact, The Search …
In Jerry Pollock’s view, God is the Master Scientist. However God operates on a different level of science because He has limitless powers that human scientists do not, indeed cannot understand. God is the unified theory of the universe that Einstein so desperately sought to find, even on his deathbed. “With God,” Pollock stated, “we are not just dealing with another human being. His powers and His intelligence are trillions of
01-24-2013 | Arts & Culture
Jerry Pollock PhD
God and Science: Author Jerry Pollock, PhD Proposes Science Does Not Does Exclud …
In a recent symposium in New York City, scientists who both believed and disbelieved in God discussed the problematic issue of science and religion. Opponents of a Supreme Being involved in creating our universe framed their arguments around their beliefs that centuries of scientifically proven biological experiments and theoretical physics and mathematics exclude God’s participation, while proponents took the opposite view where they felt that science cannot answer all the
08-04-2008 | Arts & Culture
Mukul Goel
New Book Explains How Devotional Hindus Connect to God
Mukul Shri Goel, PhD, published by iUniverse, Inc., the leading provider of publishing technology solutions for authors, has announced the release of Devotional Hinduism: Creating Impressions for God. From the first moment we utter a name of God with a wish to reach him, we trigger our spiritual evolution. As we eventually reach the peak of spirituality, we no longer desire liberation but aspire to love God forever. How does this
09-03-2007 | Health & Medicine
Noble Foundation
Man is God but lacks self-realisation: 'You Are God' book by Shashi Verma
A recently released book by Shashi Verma, You Are God – The Bhagavad Gita as never before, provides the answer to man’s eternal quest, “Who am I?” and “Who is God?” It clearly says that man is himself God but does not have the self realization that he is God. The author explains that man can free himself from ageing and death and attain everlasting life in the same physical
Comments about openPR
We publish our press releases on openPR.de because we like people who are "open" - just like us.
Frank Obels, CEO, INCONET - Informationssysteme, Communication und Netzwerkberatung GmbH