Say ‘Goodbye’ to PayPal: Adyen Replaces The Giant as an eBay Payment Partner 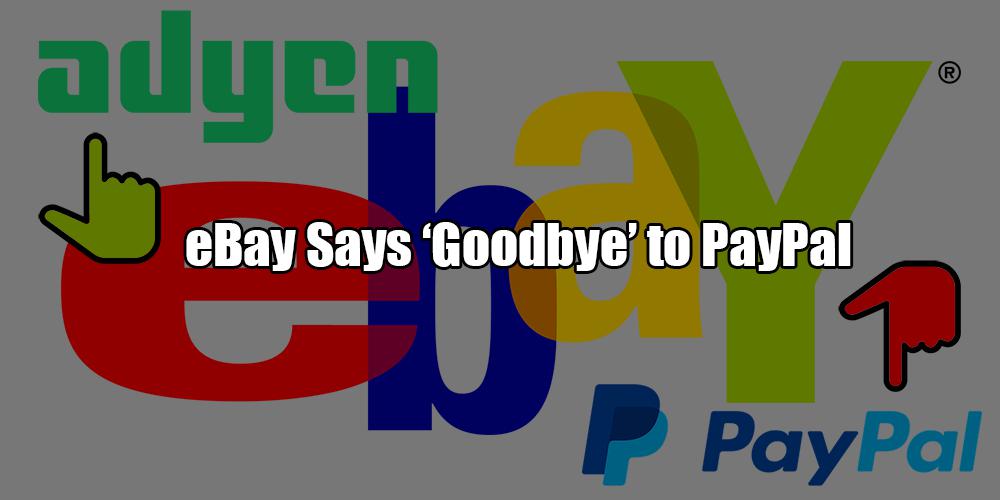 The payment services diversity has reached a new horizon. The more new players arrive at the scene, the more becomes the competition between them and existing services. This, in turn, forces giants to expand their offerings to keep up with times. However, there are also those of them who failed to hold their position and soon would be replaced with other younger platforms. Don’t you guess what platform are we talking about?PayPal’s Fall, Adyen’s AscendingLess than two months ago it was announced that eBay, one of the most prominent marketplaces globally, decided to stop their long-term partnership with PayPal. This time the scales were turned to the young Dutch platform, which is called Adyen.This solution sounded rather surprisingly to many eBay customers. These two platforms were in a cooperation for such a long time that many don’t imagine one existing without the other. But ruining the customers’ habit doesn’t bother eBay, as they consider the new partnership a more successful choice.In turn, PayPal is threatened to lose their dominance in the web payments. Fortunately, despite all the changes on the map of forces, digital payments sector is now of the blooming. That’s why it’s predicted this won’t prevent PayPal from the overall growth. For instance, if right after the announcement the PayPal’s share price declined seriously, by the end of the year it should still exceed its January 2018 peak.What Is Adyen?Adyen exists in the market since 2006. While being much less known to the public, it’s used by such services like Uber, Netflix, and Spotify. For now, it’s still a private platform, despite the current predictions about an IPO this year.What is completely new about Adyen compared to PayPal? This platform doesn’t charge vendors for payment receiving. For eBay sellers, it’s a very good news. As it’s calculated in this report, eBay will win another $2bn in the revenue.One can ask, what is the Adyen’s interest to provide the services for nothing? Such a competitive deal can become a gamechanger for a modest Adyen with $178m of revenue in 2016. And PayPal with their $11bn have begun to take eBay partnerships for granted, so such a shift can be ruining for them.‘Full payments intermediation.’ This is the idea which led eBay to this strange decision. The partnership with Adyen is just the first step forward the tighter payments integration.Adyen is a great choice for that: having a track record of discreet solution implementation, the support for 150 various currencies, it’s the best alliance for eBay growth continuation.Payment Systems Become DiversePayPal has long been the most famous digital payment service in the USA and Europe. However, marketplaces grow as well as the importance of online transaction. Where is the demand, there is a huge set of alternatives. So, it’s not a wonder why so many digital transaction projects appear every day.At Roobykon, we have different projects using payment gateway systems to base the operation upon. In each case, we strive to give such a solution to meet all the needs of our customers. Among such project one can find:LumiArts, a fine art marketplace, is a project where we chose Stripe Connect. The reason was its huge compatibility with Sharetribe, an open source platform.Another project, Bespaced.com, is one for renting a space for events. While developing this platform we decided to choose Mangopay as its features are well compatible with the European market specifics.One more Sharetribe-based marketplace we worked on, HorseBuff, uses PayPal. This wasn’t our technical advice, it was just a wish of our client. We used the new ‘adaptive’ service version and managed to combine extended flexibility with the advantages of a leading payment service adoption like confidence, etc.In our current project, a water vessel renting service, we chose using Braintree, which offers us a range of other valuable benefits for a marketplace we’re going to build.The case with PayPal and eBay show us something very special: it’s not enough to be well-known and established to keep up with the pace of technological growth. Gateway payment solutions now should be lean, strong, competitive, and take their own future into the consideration to stay in this business. Those who can think forward will rule the world tomorrow, no matter how strong the giants seem to be now. This piece of news is just a reminder, so it’s time to make conclusions and lead the right path.Source: https://roobykon.com/blog/posts/89-goodbye-paypal-hello-adyen-says-ebayWe’re all living in the era of the sharing economy. We get around with uber and lyft, rent our vacation residences via airbnb and homeaway, shop through etsy. Here at roobykon software we know how to bring your business into the sharing economy by building your marketplace. We guide our customers right from the idea initiation phase, using our experience to help choose the best platform for the project, before leading development through to a successful release – and beyond.- Roobykon Software (roobykon.com/) - Sepapaja 6, Tallinn 15551, Estonia - contact info: company phone: +372 712 2084 company email: contact@roobykon.com company skype: contact.roobykon - Presscontact: yuliia.chernykh@roobykon.com

You can edit or delete your press release Say ‘Goodbye’ to PayPal: Adyen Replaces The Giant as an eBay Payment Partner here

03-26-2018 | Business, Economy, Finances, B …
Roobykon Software
SEO For Marketplace Business in 2018
The main goal of each marketplace owner is placing their business offspring in the top SERP positions. Because people tend to only trust the first few links in the search results, it is clear that positive website search ratings can significantly increase its conversion rates. So, we’ve got an ultimate aim now. But what about the methods for achieving it? Some people believe in the holy power of keywords and tr
02-26-2018 | Business, Economy, Finances, B …
Roobykon Software
Short Introduction to Online Marketplaces
Online marketplaces are extremely useful modern web tools for retailers and customers. These eCommerce solutions make it possible to choose and buy different goods from different sellers in just a few clicks without the necessity to leave one’s home or workplace. The most prominent online marketplaces out there right now are Amazon, eBay, AliExpress, etc. Besides these, there are lots of online platforms dedicated not only to sales purposes. Airbnb
02-19-2018 | Business, Economy, Finances, B …
Roobykon Software
How to successfully start an online marketplace in 2018
2018 is undoubtedly a year of e-commerce! There are lots of marketplaces which provide people the opportunity to easily solve everyday, domestic, transport, and many other issues. And in turn for entrepreneurs, marketplaces allow combining their work. But even with all advantages given from online marketplaces, not every e-commerce business owner can be unsuccessful. What could be causing this? The most common problem for aspiring businessmen is the uncertainty in choosing a niche
02-19-2018 | Advertising, Media Consulting, …
Roobykon Software
How Blockchain May Change Future Online Marketplaces
Online marketplaces of all types have been a widely discussed issue for the last two decades. With their fast development, more and more businesspeople are trying to understand how B2B, B2C, and C2C marketplaces work and to get deeper insight into their successful algorithms. Indeed, online marketing has deserved its success. No one will argue that it possesses many fascinating features, such as: - it is scalable and fully customizable - it

05-02-2019 | Advertising, Media Consulting, …
HTF Market Intelligence Consulting Pvt. Ltd.
Payment Processing Market Is Booming Worldwide |PayPal, Stripe, Amazon Payments
A latest study released by HTF MI on Global Payment Processing Market covering key business segments and wide scope geographies to get deep dive analysed market data. The study is a perfect balance bridging both qualitative and quantitative information of Payment Processing market. The study provides historical data (i.e. Volume** & Value) from 2013 to 2018 and forecasted till 2025*. Some are the key & emerging players that are part
07-12-2018 | Advertising, Media Consulting, …
Eminent Market
Global Bluetooth Beacons Market 2018 - Estimote, PayPal, Gimbal
Eminent Market, recently published a detailed market research study focused on the “Bluetooth Beacons Market” across the global, regional and country level. The report provides 360° analysis of “Bluetooth Beacons Market” from view of manufacturers, regions, product types and end industries. The research report analyses and provides the historical data along with current performance of the global PP Pipe industry, and estimates the future trend of Bluetooth Beacons on the
06-14-2018 | IT, New Media & Software
HTF Market Intelligence Consulting Pvt. Ltd.
Mobile POS Systems Market | Leading Key players Payleven, PayPal, Adyen
A new business intelligence report released by HTF MI with title “Global Mobile POS Systems Market Size, Status and Forecast 2025” that targets and provides comprehensive market analysis with future prospects to 2023. The analysts of the study have garnered extensive research methodologies and data sources (i.e Secondary & Primary Sources) in order to generate collective and useful information that delivers latest market undercurrents and industry trends. Early buyers will
04-06-2017 | Business, Economy, Finances, B …
ReportsWorldwide
Alternative Payment Solution: PayPal
ReportsWorldwide has announced the addition of a new report title Alternative Payment Solution: PayPal to its growing collection of premium market research reports. In terms of transaction value, PayPal is the second-largest alternative payments service provider globally, after Alipay. It enables digital payments and offers acceptance solutions for consumers and merchants. The company specializes in online payments, mobile and e-commerce, fund transfers, payment processing, payment security and monetization services for developers.
06-28-2011 | Business, Economy, Finances, B …
Victoria Plum Ltd
Victoria Plumb Introduces PayPal Payments
Hull, United Kingdom (21 June, 2011) - Victoria Plumb, a leading UK online luxury retailer of bathroom furniture and accessories, announce that from 7th June 2011 they will be introducing PayPal payments on their website. Victoria Plumb is passionate about designer bathroom furniture which can cater to both modern and traditional homes. Victoria Plumb continually strive to provide their customers with the finest bathroom furniture ranges on the market, which
07-30-2010 | Advertising, Media Consulting, …
Carat
Carat wins £2m PayPal media account
Carat has been appointed in the UK to handle the £2m media strategy, planning and buying requirements across all on- and off-line media for PayPal, the online payment platform. PayPal is a platform providing a secure online payment method, which can be used for payment at thousands of online retailers, without sharing any financial information with them. Carat, who pitched successfully against a number of undisclosed agencies, will develop a multiple
Comments about openPR
We publish our press releases on openPR.de because we like people who are "open" - just like us.
Frank Obels, CEO, INCONET - Informationssysteme, Communication und Netzwerkberatung GmbH