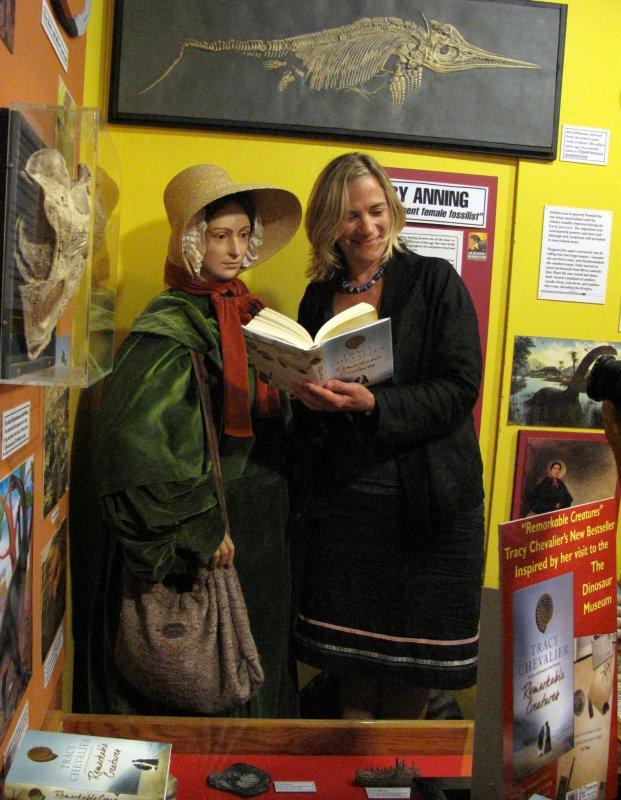 Tracy Chevalier and Mary Anning at The Dinosaur Museum in Dorchester.

Visitors to Dorchester’s award winning Dinosaur Museum were thrilled to meet bestselling novelist Tracy Chevalier when she launched her new book Remarkable Creatures at the Museum on Tuesday 25th August.Tracy, whose bestselling novel Girl with a Pearl Earring became an equally popular film spends a lot of her time in Dorset. Inspiration for her books often comes quite unexpectedly, in the case of the Girl with a Pearl Earring it was from one of Vermeer’s paintings, while her latest book, Remarkable Creatures was inspired by a trip to the Dinosaur Museum in Dorchester. “There was a gallery devoted to Mary Anning, who I'd never heard of. I was immediately drawn in, says Chevalier, “I always have those sudden moments of discovery when something strikes me that I want to write about it."Remarkable Creatures is a story based on Mary Anning, who was born in Lyme Regis in 1799 and became a major fossil collector on Dorset’s Jurassic Coast, now a World Heritage Site. She found the first complete skeleton of an ichthyosaur ever discovered. In 1821 she made another major discovery of a skeleton of a plesiosaur, the first of its kind to be found. Her third major discovery was an important fossil of a pterosaur, the first found outside Germany and thought to be the first complete skeleton found.Mary Anning died at the age of 47, of breast cancer. A few months earlier she had been made an honorary member of the Geological Society of London despite, as a woman, being ineligible for regular membership.Tracy’s new book promises to immortalise Mary Anning in her own inimitable way.World Heritage incorporates several divisions including the museum and exhibition division that administers exhibitions and museums of international stature including The Tutankhamun Exhibition and Britain’s award winning Dinosaur Museum. Other sections deal with the concept, feasibility and design of heritage based visitor attractions and retailing as well as heritage public relations and photography and a comprehensive marketing service. It also includes World Heritage Books, the publishing and book selling division.Tim Batty, 01305 269741 25 High West Street Dorchester, Dorset DT1 1UW, UK http://www.thedinosaurmuseum.com

10-20-2010 | Arts & Culture
World Heritage
Children's Teddy Bear Book Launch for Pudsey
Dorset based artist, Maya Victoria Linde, has self-published a new childrens book called "Little Bear's Winter" to help raise funds for the annual BBC Children in Need charity appeal. The official book launch and signing is on Tuesday 26 October and will take place at the Teddy Bear Museum in Dorchester. Mrs Linde is an author and illustrator mainly specialising in childrens books. "Little Bear's Winter", published to benefit BBC Children
06-25-2009 | Arts & Culture
World Heritage
The Dinosaur Museum celebrates Monster Birthday at 25
On Saturday 27th June, the Dinosaur Museum is celebrating its 25th anniversary. The Museum opened in 1984, in Dorchester, gateway to Dorset's World Heritage Jurassic Coast. From the very beginning visitors loved its novel and innovative approach to dinosaurs, and It quickly became the Town's foremost visitor attraction bringing, over the years, millions of dinosaur hungry families and schools to the county town. Jackie Ridley, the Museum's Director, said
09-25-2008 | Arts & Culture
World Heritage
Moments - Cirque Nouveau Photo Exhibition in Paris
A new exhibition of photographs by Michael Ridley opens in Paris on November 10th. The exhibition, MOMENTS - Cirque Nouveau opens at La Petite Galerie, rue de Seine, and is one of the photo exhibitions being held in the city during November, the Month of Photography in Paris. His last photo exhibition in Paris, Transvision, was in 2007. His images, impressionist in inspiration, are a fusion of two styles, but
04-08-2008 | Leisure, Entertainment, Miscel …
World Heritage
Dinosaur Museum In Bid To Bring Rare Triceratops Skeleton To Britain
Dorchester’s award winning Dinosaur Museum has received an offer from an anonymous backer to bid for a rare skeleton of Triceratops that is being auctioned by Christies in Paris on April 16th. The rare skeleton is the property of a private collector in Europe and is the star attraction of a sale of dinosaur and other fossils at the auction in Paris. It is expected to fetch around 500,000 Euros

12-31-2018 | Arts & Culture
PR for WWW
“Women, Work and Wellness” by Mary MacRory is published
ISBN #978-1787197244 “Women, Work and Wellness” by Mary MacRory is published A useful book explaining how to achieve the right work/life balance About the Book: A comprehensive, practical guide for the busy working woman to enable better understanding of yourself, your goals and how to identify and change negative behaviours and beliefs, manage stress and overwhelm and to practice better self-care. You deserve a happy, abundant, empowered and balanced personal and working life. The book
06-20-2018 | Fashion, Lifestyle, Trends
busines news
World Anti-aging Products Market 2018 - Kao, Mary Kay, LVMH
Apex Market Reports, recently published a detailed market research study focused on the “Anti-aging Products Market” across the World, regional and country level. The report provides 360° analysis of “Anti-aging Products Market” from view of manufacturers, regions, product types and end industries. The research report analyses and provides the historical data along with current performance of the World PP Pipe industry, and estimates the future trend of Anti-aging Products on
11-29-2012 | IT, New Media & Software
LAN Systems
CEO Mary Hester Principal for a Day at Simpson EC
Norcross, GA (USA), November 26, 2012 -- LAN Systems, a leading Atlanta IT Consulting firm ( http://www.lansystems.com ), CEO Mary Hester was the “Principal for a Day” at Simpson Elementary School in Norcross, Georgia. The program is a joint venture of the Gwinnett County Board of Education and the Gwinnett Chamber of Commerce. Its objective is to provide CEO-level business leaders a firsthand, authentic look at the operations of
01-14-2012 | Business, Economy, Finances, B …
Francorp Inc.
Mary Sears Children's Academy Is Expanding Through Franchising
Orland Park, IL- The Mary Sears Children’s Academy is currently in the process of franchising its high end children’s educational concept. Founded in 1964, and currently with seven units in the Chicagoland area, The Mary Sears Children’s Academy has been educating young children between the ages of six weeks and twelve years old. Mary Sears, foundress, is a mother of seven children with a Doctorate Degree dedicated to
03-02-2010 | Leisure, Entertainment, Miscel …
Aloe Entertainment
Mary Aloe - Proud Mary Entertainment and Team Complete Bond Scouting for MARY MO …
Ouarzazate, Morocco - Bond scouting was accomplished for the film, MARY MOTHER OF CHRIST. The director, line producer, production designer,and producer Mary Aloe, along with the Dune Film team, got most of the coverage – hot, beautiful, and absolutely stunning. Mary Aloe told us, "It will be interesting to film a Christian movie in a Muslim world. The film crew is A+ (Babel, Prince of Persia, Hidalgo,
03-27-2008 | Leisure, Entertainment, Miscel …
Southwest Actors Guide
Actress Mary Robinson Released From Hospital
San Antonio, TX. Actress Mary Robinson (28) was released from the Santa Rosa hospital this morning after undergoing emergency surgery to remove a large mature teratoma (benign ovarian tumor) nested on her right ovary Friday March 21. Robinson ("Friday Night Lights," "Dating Danielle," "Follow the Star," "Fluffy") was rushed to Santa Rosa Hospital emergency room early Thursday morning complaining of persistant pain on her right side, suspecting a possible appendicitus.
Comments about openPR
Your portal is fast, simple, and easy to use. Others may have more functions but they also demand more editing time, you have to preformat the text in order to achieve a good result etc. I think openPR is really fantastic!
Andreas Knepper, wallmedien AG