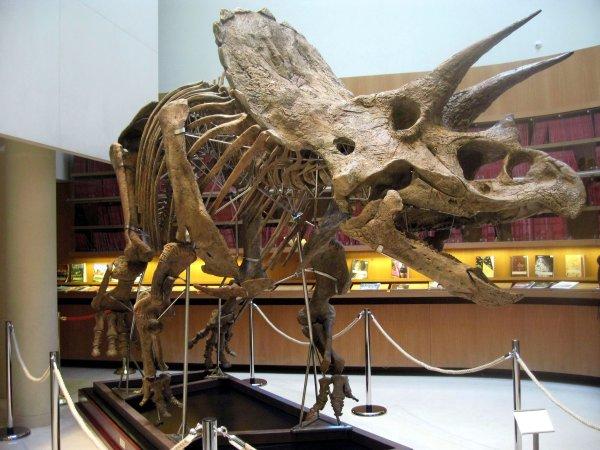 Dorchester’s award winning Dinosaur Museum has received an offer from an anonymous backer to bid for a rare skeleton of Triceratops that is being auctioned by Christies in Paris on April 16th.The rare skeleton is the property of a private collector in Europe and is the star attraction of a sale of dinosaur and other fossils at the auction in Paris. It is expected to fetch around 500,000 Euros but may go much higher as it has attracted worldwide attention. Jackie Ridley, the Director of the Dinosaur Museum said the Triceratops is simply spectacular. “It would be really wonderful if we could bring the dinosaur to Britain and in particular The Dinosaur Museum in Dorchester”She continued, “ Not only is it the only one of its kind in Europe, but generally Britain does not have any complete skeletons of this calibre. Most of the excavated dinosaurs in Britain are fragmentary in comparison. Triceratops was not native to Britain but it would be great for people to see such an important skeleton in the U.K”The 7.5 metre (24 foot long) Triceratops, is the only one of its kind in Europe. The skeleton, Triceratops horridus a three-horned giant dinosaur was found in 2004 by rancher in the United States in North Dakota. The fossil skeleton is 70 percent complete and is mounted as a complete beast with the missing bones cast in resin from other specimens. It’s the fourth most complete skeleton of Triceratops yet found and is only the second almost complete dinosaur skeleton to go for sale by public auction. The last fossil skeleton to be sold by auction, a Tyrannosaurus rex, was sold in New York by Sotheby’s in 1997. It was sold to a Chicago Museum for $8 million.Unlike T rex that was a carnivore, Triceratops was a herbivore or vegetarian, however with its massive frilled skull and three long horns it was a formidable animal and in any battle with T rex could more than hold its own. The Triceratops skeleton weighs over 200 kilos or 440 lbs and dates to the late cretaceous period over 65 million years ago.The museum is talking to another sponsor as it fears the funds offered from the anonymous backer may not be sufficient.The Dinosaur Museum in Dorchester in the heart of Dorset’s World Heritage Jurassic Coast is the only museum in mainland Britain exclusively devoted to dinosaurs. Opened 24 years ago it attracts tens of thousands of visitors to Dorchester every year. Exhibits include dinosaur fossils and skeletons, full size dinosaur models and multi-media displays and has won awards for its hands-on exhibits.Tim Batty 01305 269741 tim@thedinosaurmuseum.com http://www.thedinosaurmuseum.com/dinosaur-news/ World Heritage Ltd 25 High West Street Dorchester, Dorset, DT1 1UW United KingdomWorld Heritage administers a range of exhibitions and museums of international stature. It also organises travelling and temporary exhibitions which are available for hire.

10-20-2010 | Arts & Culture
World Heritage
Children's Teddy Bear Book Launch for Pudsey
Dorset based artist, Maya Victoria Linde, has self-published a new childrens book called "Little Bear's Winter" to help raise funds for the annual BBC Children in Need charity appeal. The official book launch and signing is on Tuesday 26 October and will take place at the Teddy Bear Museum in Dorchester. Mrs Linde is an author and illustrator mainly specialising in childrens books. "Little Bear's Winter", published to benefit BBC Children
09-04-2009 | Arts & Culture
World Heritage
Tracy Chevalier launches her new Best Seller at The Dinosaur Museum in Dorcheste …
Visitors to Dorchester’s award winning Dinosaur Museum were thrilled to meet bestselling novelist Tracy Chevalier when she launched her new book Remarkable Creatures at the Museum on Tuesday 25th August. Tracy, whose bestselling novel Girl with a Pearl Earring became an equally popular film spends a lot of her time in Dorset. Inspiration for her books often comes quite unexpectedly, in the case of the Girl with a Pearl Earring it
06-25-2009 | Arts & Culture
World Heritage
The Dinosaur Museum celebrates Monster Birthday at 25
On Saturday 27th June, the Dinosaur Museum is celebrating its 25th anniversary. The Museum opened in 1984, in Dorchester, gateway to Dorset's World Heritage Jurassic Coast. From the very beginning visitors loved its novel and innovative approach to dinosaurs, and It quickly became the Town's foremost visitor attraction bringing, over the years, millions of dinosaur hungry families and schools to the county town. Jackie Ridley, the Museum's Director, said
09-25-2008 | Arts & Culture
World Heritage
Moments - Cirque Nouveau Photo Exhibition in Paris
A new exhibition of photographs by Michael Ridley opens in Paris on November 10th. The exhibition, MOMENTS - Cirque Nouveau opens at La Petite Galerie, rue de Seine, and is one of the photo exhibitions being held in the city during November, the Month of Photography in Paris. His last photo exhibition in Paris, Transvision, was in 2007. His images, impressionist in inspiration, are a fusion of two styles, but

05-30-2008 | Science & Education
MOSI Tampa, FL - Museum of Science & Industry
Dinosaurs! Exhibition opens June 13th at MOSI Tampa Bay, FL
Gigantic dinosaurs roamed the earth millions of years ago, and are now making a comeback. DINOSAURS! The Exhibition will debut at MOSI on Friday, June 13! The exhibition travels back in time to the Mesozoic era when dinosaurs ruled the Earth. The 5,000-square-foot exhibit will give visitors an up-close view of ten robotic dinosaurs. Gaze at the Pteranodon–a huge flying reptile with a 23-foot wingspread–soaring high overhead. See the giant animatronic
Comments about openPR
OpenPR is clearly structured and remains true to its principle of confining itself to the essential parts. OpenPR has proven to be a very good and reliable partner to our media agency: Within the shortest time the releases are online and go down well with the media representatives. The success of OpenPR is reflected in the steadily increasing number of press releases. It is good that OpenPR exists!
Ursula Koslik, Director Marketing & PR, F+W Hamburg