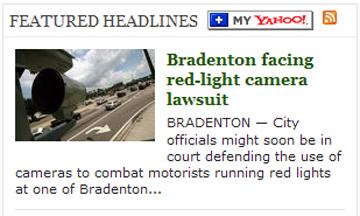 David Haenel spoke with the Bradenton Herald about red-light cameras in Manatee County.

David Haenel and his law partner Darren Finebloom have spent years building their criminal defense practice in Sarasota and Tampa. They are well versed in all areas of criminal defense and specialize in traffic cases and DUI so when the Bradenton Herald reporter Robert Napper needed to speak with an attorney for his August 25th article entitled “Bradenton facing red-light camera lawsuit” he called the Law Offices of Finebloom & Haenel to get their views on the new red-light cameras that have been installed in Manatee County.The article came about after a class action lawsuit was filed in Orlando against red-light cameras in that city. The lawyer who filed the suit then said he planned to add Bradenton to his list of cities his firm will sue in Florida. The suit claims that the red light cameras do not identify drivers only cars and the owner of the car is presumed guilty, which is the opposite of the standard which is presumed innocent until proven guilty. If the suit is certified as a class action, more plaintiffs are expected to be added.David brought a new dimension to the argument against red-light cameras when he spoke with the Bradenton Herald. He made the point that the city police will determine violations from the photos taken by the cameras and the appeals process will go through the city’s code enforcement board.“The city will be policing itself, and that is crazy,” David told Mr. Napper in Tuesday’s Bradenton Herald. “This is about money and nothing else.”For more information about the Law Offices of Finebloom & Haenel or for a free consultation please call us at 941-953-2622 or 1800-FIGHT-IT. You can also visit their website at www.fightyourtickets.com. For helpful advice help with your traffic case you can visit their blog at http://www.floridaduitrafficticketlawyerblog.com/.Finebloom & Haenel 200 N Washington Blvd Sarasota, FL 342361-800-FIGHT IT 941-953-2622 813-649-8690

04-04-2016 | Sports
Bradenton Christian School
Two Bradenton Christian School seniors sign to play college sports
Two seniors at Bradenton Christian School signed college sports commitment letters yesterday surrounding by their fellow classmates. Landry Miller will be playing golf at Southeastern University and Olivia McDaniel will be playing volleyball at Broward College. Landry Miller has attended Bradenton Christian School since the 1st grade and has played on the golf team since 7th grade. Landry made the all-conference team and was the Captain this
02-27-2013 | Industry, Real Estate & Constr …
RE/MAX Alliance Group
Jane Tinsworth Joins RE/MAX Alliance Group in Bradenton, Florida
BRADENTON, FLORIDA – Realtor Jane Tinsworth has joined RE/MAX Alliance Group in the Manatee Avenue office. A Manatee County resident since 1974, Tinsworth has more than 25 years of real estate experience, last serving with Coldwell Banker. Her dedication, knowledge, persistence and proven home marketing system have made her a top-producing Manatee County agent. She is a seven-year recipient of the Five Star Real Estate Agent Award, determined by an independent
10-23-2012 | Science & Education
Team Success A School of Excellence
Bradenton, Florida Charter School serves as a model for Florida and the Nation
BRADENTON, FL – In keeping with its mission to celebrate academics like America celebrates sports, Team Success charter school held an academic pep rally recently to commemorate its rise from an “F” school to an “A” school in just two years. Serving about 300 students from kindergarten through 8th grade, Team Success was the only one of the 21 Title 1 schools in Manatee County to earn an “A” grade
10-10-2012 | Industry, Real Estate & Constr …
RE/MAX Alliance Group
Mark Rusch Joins RE/MAX Alliance Group in Bradenton, Florida
BRADENTON, FLORIDA – Mark Rusch has joined RE/MAX Alliance Group as a Sales Associate in the Manatee Avenue Office. He has 25 years of experience in real estate, including 10 years in an Atlanta RE/MAX office. Rusch has lived in the area for five years, and has a broad residential real estate background, including second homes, vacation homes, new homes and condominiums. He earned a bachelor’s degree in Music at the University
09-28-2012 | Industry, Real Estate & Constr …
RE/MAX Alliance Group
Realtor Rebecca Samler of Bradenton, Florida, Earns RE/MAX Hall of Fame Award
BRADENTON, FLORIDA – Rebecca Samler has been presented with the RE/MAX Hall of Fame Award, which honors successful agents who have earned more than $1 million in commissions during their careers with the company. In 2011, only less than 2 percent of all RE/MAX affiliates earned this prestigious award. An associate in the Bradenton office of RE/MAX Alliance Group, Samler has been selling real estate on the Florida Suncoast for
04-05-2012 | Industry, Real Estate & Constr …
Re/Max Alliance Group
Rhonda Coupland Joins RE/MAX Alliance Group in Bradenton, Florida
BRADENTON, FLORIDA – Rhonda Coupland has joined RE/MAX Alliance Group in the Manatee Avenue Office. Originally from Canada, Coupland moved to Bradenton in 1979. Previously with RE/MAX Gulfstream, which has since merged to form RE/MAX Alliance Group, she returns to RE/MAX to invigorate her real estate career. She has also worked in the title industry, doing pre-closing, post-closing and marketing for Masters Title Insurance. Her father is David Coupland, a
Comments about openPR
Your portal is fast, simple, and easy to use. Others may have more functions but they also demand more editing time, you have to preformat the text in order to achieve a good result etc. I think openPR is really fantastic!
Andreas Knepper, wallmedien AG