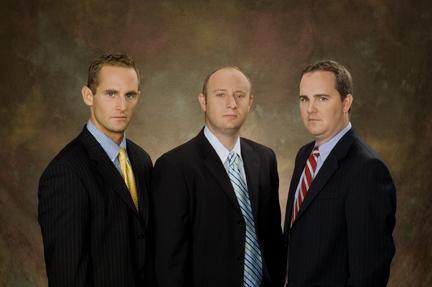 The lawyers of Finebloom & Haenel

Seven clients of the Law Firm of Finebloom & Haenel, a criminal defense firm in Tampa, FL, saw their DUI cases dismissed after two county judges in Manatee and Sarasota Counties threw out evidence in 13 cases. The judges ruled that the sheriff office’s plans for DUI checkpoints during 2008 gave deputies too much power. The ruling means that prosecutors cannot use the breath-alcohol tests, field sobriety tests or officer observations in essence ending those prosecutions. Without this evidence the State Attorney’s office dismissed all charges.Within the last year, The Second District Court of appeal made an important ruling on a checkpoint plan in Charlotte County, Florida. The Court held that the checkpoint plans were insufficient and gave too much discretion to the officers. This ruling is especially important in Tampa and all of Hillsborough County. Tampa is within the Second District Court of Appeal so this decision would be binding on every checkpoint case in Tampa. The ruling could be applied to anyone stopped at a Hillsborough County checkpoint and arrested for DUI. Darren Finebloom gathered his seven checkpoint cases and filed a motion to suppress all of the evidence obtained as a result of the illegal checkpoint. Shortly after his clients were arraigned and pled not guilty the motion was filed with the court. The State presented several witnesses and the checkpoint guidelines. After a two hour hearing the Judges all unanimously ruled that the guidelines were unconstitutional and all evidence was excluded. All of the clients were stopped at DUI checkpoint. Most were asked if they had been drinking and were subsequently arrested for DUI. One of the Defendant’s was on her 4th DUI which if convicted would have resulted in significant jail time and a permanent suspension of her license. Darren Finebloom was quoted in the article explaining that once the evidence obtained after the stop was suppressed the State is left with no case. Subsequently the State Attorney’s office dismissed all seven DUI charges against his clients.If you or a family member has been stopped at a checkpoint in Hillsborough County whether it is Tampa or Plant City, it is imperative that you contact a qualified DUI attorney in the Tampa area. For more information about Finebloom & Haenel Tampa DUI Attorneys or for a free consultation please call us at 813-649-8690 or 1800-FIGHT-IT. You can also visit their website at www.fightyourtampadui.com. For helpful advice help with your Tampa DUI or Tampa criminal case you can visit their blog at http://www.floridacriminaldefenseattorneyblog.com.The Law Offices of Finebloom & Haenel, P.A. is a DUI defense law firm servicing clients throughout the West Coast and Central Florida. At Finebloom & Haenel, each of our attorneys understand Florida DUI law and are passionate in our representation of each and every client. We use our knowledge, training and years of experience to defend our DUI clients to the fullest extent possible. You can be confident that our team of lawyers, comprised of former prosecutors and former public defenders, are well versed in all aspects of DUI law. In fact, David Haenel, a founding member of the firm, was named the 2004 State of Florida Prosecutor of the Year and spent a large majority of his time traveling throughout the State of Florida training new prosecutors on DUI related issues. With offices located in Sarasota, Tampa, Clearwater, and Brandon, we proudly extend our legal expertise and trial skill to people who have been arrested for DUI in Charlotte3426 West Kennedy Boulevard Tampa, FL 33609(813) 649-8690 800-FIGHT-ITwww.fightyourtampadui.com www.fightyourcase.com

08-25-2009 | Politics, Law & Society
Law Offices of Finebloom & Haenel
Sarasota Attorney David Haenel Weighs In On Red Light Cameras In The Bradenton H …
David Haenel and his law partner Darren Finebloom have spent years building their criminal defense practice in Sarasota and Tampa. They are well versed in all areas of criminal defense and specialize in traffic cases and DUI so when the Bradenton Herald reporter Robert Napper needed to speak with an attorney for his August 25th article entitled “Bradenton facing red-light camera lawsuit” he called the Law Offices of Finebloom &

01-17-2012 | Politics, Law & Society
Milligan Coughlin LLC
Boston DUI Attorney
The attorneys at Milligan Coughlin are dedicated to defending the rights, future, and liberty of their clients that have been accused of a crime. Every person accused of a crime in the United States has Constitutional rights that even they may not know about The criminal defense team at Milligan Coughlin puts their client first in every single case, ensuring the rights of their clients are maintained through zealous representation
01-11-2012 | Politics, Law & Society
San Diego DUI Defense Attorney
San Diego DUI Defense Attorney
January 9, 2012: Mark R. De Yoe, APLC, San Diego DUI defense attorney, has over 25 years of experience as a DUI defense attorney and understands how stressful, scary and confusing being involved with a DUI can be. As Mark's website states, "he's not an experienced DUI attorney, he is and extremely experienced DUI attorney." Mark R. De Yoe has seen it all, as far as DUI cases go: first second,
07-27-2011 | Science & Education
Law Office of Corso & Rhude
DUI and Marijuana Charges May Hamper College Students’ Future Success
Law Office of Corso & Rhude cautions parents, students that such cases require the experienced Arizona DUI defense lawyers at the Law Office of Corso & Rhude. Combined, the Law Office of Corso and Rhude has handled more than 15,000 DUI cases as prosecutors and defense attorneys. Peoria, AZ. July 26, 2011 -– As Arizona teenagers and college students go back to school this August, the risk of marijuanadrug charges and
12-22-2010 | Politics, Law & Society
Spaerca Inc
DUI Attorney -- What To Do and At What Costs -- DUI Attorney Fees
Many of you are asking what to do if you get pulled over for dui [Drive Under the Influence] Dui Attorney There is only one answer for this: Call your DUI attorney. In this situation there are a lot of factors to take in consideration and many potential bad consequences like: going to jail for DUI, losing your driver licence maybe your job.If you get caught for driving under the
12-06-2010 | Business, Economy, Finances, B …
Christopher Koch & Associates
Dui Attorney Orange County CA
When you are arrested in the state of California for a DUI, there are two actions that are taking place: 1. A Criminal Action – you will need to defend yourself in a court of law against the charges filed against you. And 2. A civil action by the DMV – the DMV will take immediate steps to automatically suspend your driving privileges in the state of California. In either
07-24-2009 | Politics, Law & Society
Mayberry Rich
Tampa DUI Defendant’s Charges Dismissed
The Hillsborough County State Attorney’s office dismissed all charges against a Tampa defendant charged with Driving Under the Influence (DUI), on the grounds that the officer who originally pulled over the defendant did not have a legally sufficient reason to do so. The defendant had retained Tampa DUI attorney Jeff Rich of Mayberry/Rich, criminal defense firm in Tampa, FL, as his attorney. The defendant was originally pulled over for
Comments about openPR
OpenPR ist the nicest and most clearly laid out PR platform I have seen to this day. The press releases are displayed very nicely and clearly and without any unnecessary frills. The updates are fast and the finished release looks appealing and is clearly legible. Even with 16 years of experience one discovers new things from time to time. Congratulations!
Gabriele Ketterl, Director Marketing & PR, Menads