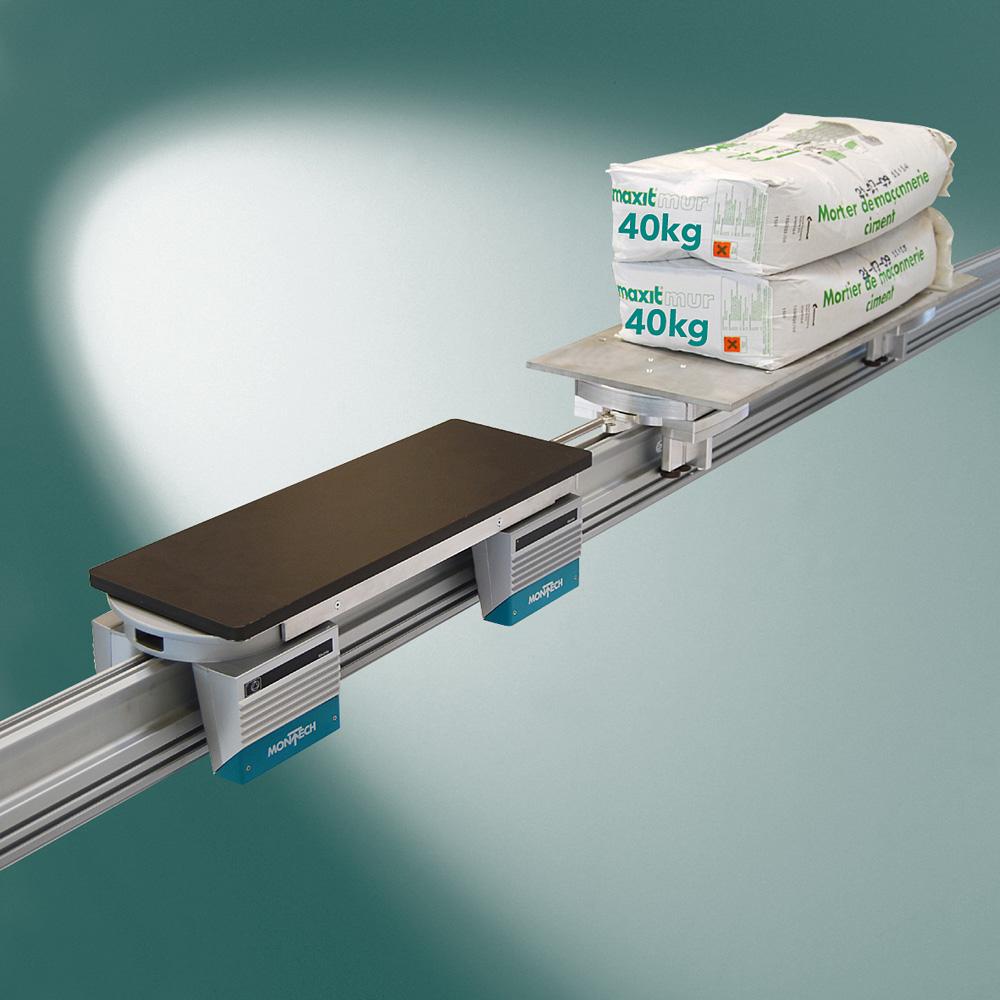 The heavy-load shuttle can carry weights up to 80 kg

At Motek 2009 in Stuttgart, Montech is introducing a new generation of shuttles and a heavy-load version, the new TB conveyor family, the Basic belt conveyors and the full range of automation components.The new-generation shuttles are specifically designed for large-scale intralogistic projects. The shuttles can travel up to 60 m/min and carry heavy weights, while so far speeds up to 30 m/min and loads up to 28 kg were possible. The shuttle is equipped with a powerful processor like the previous models, with the additional option of wireless communication. “The transfer of large data volumes and direct communications to other systems are no longer a problem, and the RFID interface is even more efficient,” says Yves Dicke, Montrac Division Manager of Montech. Shuttle for heavy loads For loads up to 80 kg, a so-called heavy-weight shuttle has been developed and will be exhibited at Motek. The new shuttle has reinforced carriage and profiles and runs at controlled speed. For higher loads, Montech has created a trailer for the shuttle, while weights up to 50 kg can be carried directly on the shuttle. “Thanks to the monorail, also the version for heavy loads ensures maximum accuracy and efficient application,” adds Dicke.New belt conveyors, more stable and sturdy In the TB belt conveyors, the covers of chains and pinions, so far made of plastic, have been replaced with a new aluminum cover. The drive rollers are protected by a rear cover that prevents the penetration of dirt and dust. “The new TB series of belt conveyors is more stable and sturdy”, says Gianluca Aloisi, Conveyors Division Manager, Montech. Also accessing the conveyors for maintenance operations is easier and more efficient, thanks to the reduction of locking screws and the use of quick closures. Another enhancement is the sliding sheet metal plate that can be simply pushed downwards. This avoids dirt and particles falling off the belt and reaching into the conveyor. Six different frame widths The TB belt conveyors are available with six frame widths, from 60 to 250 mm, and can be ordered with single or double belt. The drive unit can be installed horizontally or vertically, in any position along the entire free length of the frame. The 230/400V motor allows to reach belt speeds from 0.6 to 38.4 m/min. According to the application, the TB belt can carry weights above 100 kg.Basic belt conveyor Latest news from Montech includes the Basic model added to the range of belt conveyors. These new belts have limited functionality, for instance only four speeds can be set. The Basic conveyors are available with drives installed at the end or in the middle, and frame widths between 45 and 800 mm. “The Basic belts are like high-end cars without options like heated seats, navigator or sunroof,” says Aloisi. With this product, according to Aloisi, Montech delivers high-quality belt conveyors in the lower price range. Automation components, high flexibility Users can achieve high flexibility with the electrified automation components: grippers, rotary drives, universal compact slides and Servoline. In electric grippers, the gripping strength and speed can be adjusted independently. The electrically operated rotary drive DAE-60 can move into different positions (up to 31 programmable positions), traveling at different speeds between one position and another. All electrified handling components can be driven by the same regulation device. The preset settings of the regulation device provide for very easy and quick commissioning. In addition, the digital I/Os allow very easy control.In the stand No. 1170 in Hall 1, over a 180-square-meter surface, Montech will exhibit the latest news, the full range of belt conveyors and most automation components.Montech AG markets basic modular components that automate demanding production and logistics processes. In addition to conventional conveyor belts, automation components and the Quick-Set profile system, the range of products also includes the Montrac transport system. Montrac is an intelligent transport system for networking industrial production and logistics processes. Founded in 1963, the company is based in Switzerland and stands for innovation in the automation industry.Montech AG Gewerbestrasse 12 CH-4552 Derendingen Phone: +41 (0)32 6815500 Fax: +41 (0)32 6821977 www.montech.com E-Mail: info@montech.com Presscontact: Elke Manthei Phone: +41 (0)32 6815542 E-Mail: elke.manthei@montech.com

You can edit or delete your press release Montech: news and proven solutions at Motek 2009 here

02-24-2020 | Tourism, Cars, Traffic
Stonehead Bikes
Basic Notions about Motorcycle Luggage
Before going for the motorcycle trip, you have to know how to choose very well what accessories we will add to the motorcycle to maintain the weight balance. But it is also important to know what to buy and whatnot. All in order If your goal is to go on a long trip with your motorcycle, the first thing to consider is how you are going to distribute the weight. As for
08-14-2017 | Science & Education
Advance Innovation Group
Basic Concept of LEAN Methodology
By the Oxford dictionary when we use the term Lean as an adjective for a person or animal it means that person or animal is thin, especially healthy so; no extra fat in the body. In the same way LEAN methodology works in the industry, if any industry is practicing Lean principles it means the industry is continually improving its process by removing waste (MUDA) and non-value added activities (MURA
03-08-2017 | Health & Medicine
Harley Body Clinic
Basic Understanding Of Rhinoplasty
This surgery is performed under general or local anesthesia, but mostly done on an outpatient basis or sometimes 1 day night stay is required in the surgery centre. An incision is made inside the nose in such a way that it is visible during surgery to access the cartilage and bones that’s supports the nose. To get the desired look, either some tissue is added or some bones and cartilages
12-16-2016 | Industry, Real Estate & Constr …
Gema switzerland GmbH
Vertical Reciprocator ZA10 – the powerful basic reciprocator
The new vertical reciprocator ZA10 by Gema Switzerland GmbH is the perfect model for starting the automation of powder coating for customers from different markets and various application demands. The standard size (stroke = 1800 mm) allows a loading capacity of up to 30 kg (6 automatic guns). The vertical reciprocator ZA10 is equipped with a state-of-the-art drive technology (Synchronized motor – Servo drive). Thanks to the high efficiency during continuous
05-22-2007 | Politics, Law & Society
FORUM Institut für Management
Basic PCT Formalities Course
The german Forum Institute for Management expandes continuously all over Europe. Its prosperous seminar \"Basic PCT Formalities Course\" ist now also arranged in Athens. The purpose of this seminar is to inform the participants how to prepare an international application for filing under the PCT and subsequently monitor the consecutive procedural steps, time-limits and payment of fees in the PCT international phase up to and including entry into the national
09-04-2006 | Advertising, Media Consulting, …
PPC Search Engine CPXclick.com
Basic in Search Engine Optimization
Nowaday, most people only talk about Googel, MSN and Yahoo new algorithms change. Of course, if you can estimiate search engine algorithms, your page search engines ranking If there is one guaranteed constant in this business it is that there will always be changes in the search engines\' rankings. Our job, as search engine marketers, is to stay on top of the changes and to monitor how the change affects our
Comments about openPR
We publish our press releases on openPR.de because we like people who are "open" - just like us.
Frank Obels, CEO, INCONET - Informationssysteme, Communication und Netzwerkberatung GmbH