TankDepot.co.uk partners with Harlequin for EBEC 2009 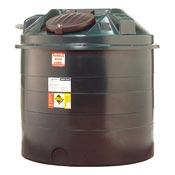 Leading online storage tank reseller TankDepot.co.uk, has teamed up with Harlequin, to attend EBEC 2009 – Europe’s largest biofuels exhibition.Steve Beech, Director with TankDepot.co.uk says, “This will be the third successive year we have partnered with Harlequin at this important event, which attracts not only visitors from within the UK, but a growing number of overseas visitors too.“Working alongside Harlequin, we will be seeking to inform visitors of the importance of environmentally responsible fuel storage. We have observed that amongst some biofuel users, there is a misconception that the storage regulations for biofuels are somehow less demanding and less onerous than for traditionally refined fuels. “However, at most installations, UK law makes no distinction between the storage requirements for biofuel and regular grades of Diesel and Heating Oil. Fundamentally, exactly the same requirements apply.“Harlequin’s BioBund and BioFuel Station ranges can assist biofuel users in achieving compliance with applicable UK fuel storage regulations. Manufactured from a specialist, chemical grade of Medium Density Polyethylene, Harlequin’s BioBund and BioFuel Station ranges are suitable for the storage of liquid biofuel produced in accordance with the requirements of British Standard BS EN14214.”Organised by Biofuels Media Limited, EBEC is the largest bio-energy event to be held anywhere in Europe. This year, EBEC is being held at Stoneleigh Park, near Coventry from 8th to 10 October 2009. For more information and to register for the event online, visit www.ebec.co.ukAbout TankDepot.co.uk: Since it first appeared online in 2006, TankDepot.co.uk has revolutionised how Britons buy tanks and is today established as the leading online reseller of storage tanks in the United Kingdom. The TankDepot.co.uk product range includes Single Skin and Bunded Tanks for the storage of Agricultural Fuel Oil, Biodiesel, Diesel, Heating Oil, Non Potable Water, Potable Water, Waste Oils and Lubricants – together with a range of oil tank and fuel storage accessories. For more information on TankDepot.co.uk, visit www.tankdepot.co.ukSteve Beech Director TankDepot.co.uk Duffield Road Little Eaton Derbyshire DE21 3DR United KingdomT: 01332 834 141 F: 01332 134 145 E: info@tankdepot.co.uk W: www.tankdepot.co.uk

You can edit or delete your press release TankDepot.co.uk partners with Harlequin for EBEC 2009 here

09-28-2011 | Energy & Environment
TankDepot.co.uk
Northern Ireland Businesses Unaware Of New Fuel Oil Storage Regulations
New research commissioned by oil tank supplier TankDepot, reveals a significant proportion of Northern Ireland businesses are unaware of new fuel storage regulations in the province. With the first phase of The Control of Pollution (Oil Storage) Northern Ireland (Regulations) 2010 having just come into effect, new research commissioned by TankDepot.co.uk, reveals that two thirds of businesses in the province are unaware of their existence. For the first time in Northern Ireland,
06-06-2011 | Energy & Environment
TankDepot.co.uk
UK Heating Oil Thefts Increase by 4%
New research by fuel tank supplier TankDepot.co.uk, reveals that reported instances of heating oil thefts increased by approximately 4% during 2010. The research was commissioned by TankDepot.co.uk and completed by independent heating oil industry consultants, J Switzer Associates. Every police force in the UK was contacted under the Freedom of Information Act, and requested to provide the number of reported heating oil thefts in their area during 2009 and 2010.
07-22-2010 | Energy & Environment
TankDepot.co.uk
It's a date… visit TankDepot.co.uk at the Oil & Renewables Show
UK oil storage tank specialist TankDepot.co .uk, has confirmed it will be exhibiting at the inaugural Oil & Renewables Heating Show to be held at the Ricoh Arena, Coventry in October. The national two-day event will showcase the latest products, services and technologies and provides the perfect platform for heating technicians to share and promote best-practice and network with industry peers. TankDepot.co.uk's Steve Beech says, "Organised by A&D Publishing and
06-25-2009 | Energy & Environment
TankDepot.co.uk
Water and Oil do mix online at TankDepot.co.uk
Online storage tank supplier TankDepot.co.uk, is perhaps best known for its range of fuel oil tanks. However, the UK company has recently added a new range of Water Storage Tanks, designed to satisfy demand for an affordable and regulatory compliant water storage solution at ‘off mains’ installations. Available in both Potable and Non Potable guises, the new Harlequin range is available in a choice of 7 different capacities from approximately 920