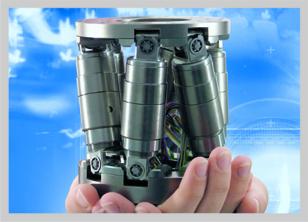 The compact M-810 has a smaller diameter than a CD, but offers large travel ranges in 6 axes and excellent positioning resolution

The tried-and-tested parallel kinematics hexapod systems from Physik Instrumente (PI) provide precise positioning in six axes with precisions below 1 µm. The new miniature M-810 hexapod takes up only minimal installation space. With a diameter of only 10 cm and a height of 118 mm it provides travel ranges up to 40 mm in the XY-plane and up to 13 mm in the Z-direction. The high-precision brushless special DC motors and high-resolution encoder give each individual strut a positioning resolution of a mere 40 nm. The mini-hexapod reliably positions loads up to 5 kg and achieves speeds of up to 10 mm/s. Despite its compact size, the necessary driver electronics have been integrated into the base platform of the mini-hexapod. The control is 100% compatible with all previous hexapod models and is conveniently executed via an Ethernet connection. As with all PI hexapods, the position can be entered with commands in Cartesian coordinates. Parallel kinematics systems have several advantages over stacked multi-axis positioners. All six actuators act on a joint platform, which keeps the moved mass low. Moreover, there is no summation of the lateral runout and tilts of individual axes. The pivot point can be selected as desired via software commands and thus remains independent of the movement. Well-known for its high quality, PI has been one of the leading players in the global market for precision positioning technology for many years. And PI has been developing and manufacturing standard and OEM products with piezo or motor drives for 40 years. In addition to its three German factories, PI has eight subsidiaries and a total of 500 employees worldwide. Physik Instrumente (PI) GmbH & Co. KG Auf der Roemerstrasse 1 76228 Karlsruhe Germany info@pi.ws www.pi.ws