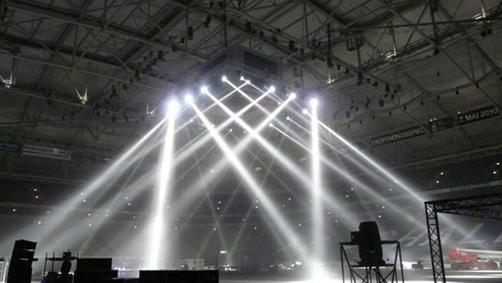 On the 20th June, FALCON searchlights were deployed at one of the biggest boxing events of the last year, the triumph by TKO of IBF, WBO and IBO world champion Wladimir Klitschko over WBA ‘world champion in waiting’ Ruslan Chagaev. The fight was broadcast live and exclusively by RTL from the Veltins Arena of Bundesliga club Schalke 04. With 61,000 spectators in the stadium and a further ten million following the event on TV, this was one of the most watched fights in German history.PROCON, the firm responsible for the technical equipment, contracted A&O Technology to supply fifty-two FALCON xenon searchlights for the event. To present the ring and arena in a suitably dramatic light, some thirty-two FALCON BEAM 3kW and twenty high-power FALCON 6000 CMY luminaires were flown from the trusses directly above the ring. From this position, they were able to accompany the march-in and the performance by the Swedish pop group Mando Diao with an impressive light show as well as highlighting the ring and the vast crowd. A masterly blend of FALCON searchlights and pyrotechnics was used to bring the atmosphere to boiling point as the fight got underway, and at the beginning of each round the ring was framed by powerful beams of light. The exhilarating and dynamic lighting design was the work of MLD (misch.light.design).A&O Lighting Technology GmbH, which was founded by Marco Niedermeier, has been actively engaged in the hiring and sale of show and architectural lighting equipment since 1995. A&O's diverse inventory includes special LED equipment and several hundred searchlights (high-power xenon floodlights) that can be used for well-known entertainment- and architectural lighting applications. It also has the exclusive worldwide distribution rights to a variety of architectural luminaries and searchlights, such as the FALCON® range from alpha one. A&O Lighting Technology, with headoffice in Germany, is active worldwide with subsidiaries and bureaus in UAE, USA, UK and Asia. For more information, visit: www.ao-technology.comJune 2009 / A&O Lighting Technology GmbH, Industriestraße 31-33, 28876 Oyten, Germany, Telephone: 0 42 07 / 66 84-0, Internet www.ao-technology.com, Contact: Tanja Niedermeier

11-05-2018 | Health & Medicine
Future Market Insights
GCC Medical Gloves Market Size By 2026 | Paul Hartmann AG, Hotpack Packaging Ind …
The GCC medical gloves market is estimated to increase from US$ 99.5 Mn in 2016 to US$ 240.8 Mn by 2026, registering a CAGR of 9.2% over the forecast period 2016–2026, according to a latest report titled “GCC Medical Gloves Market: Industry Analysis & Opportunity Assessment, 2016-2026” published by Future Market Insights. According to Future Market Insights analysts, an increasing awareness regarding hygiene and health and safety is boosting the growth
08-28-2018 | Advertising, Media Consulting, …
Agrimony Market
Agrimony Market Key Players Emorsgate Seeds, Falcon Russia., Healingherbs Ltd.
Agrimony Market Introduction Agrimony is a genus of 12–15 species of perennial herbaceous flowering plants in the family Rosaceae. Commonly it is known to be a domestic medicinal herb, which is native to the temperate regions of the Northern Hemisphere, with one species also in Africa. The agrimony herb has spikes which bear rows of tiny yellow flowers, known as church steeples. The agrimony is also characterized by having fruits that
02-27-2018 | Business, Economy, Finances, B …
business news
Global Turn Coordinators Market 2018 - EGC, FALCON GAUGE, Century Flight
The statistical surveying information incorporated into the Turn Coordinators report is the aftereffect of significant essential and optional research exercises. The report fragments the global Turn Coordinators market based on makers, item compose, applications, and regions. In this report, each fragment is contemplated completely and measurements are introduced in detail. The report offers an exact outline of the global Turn Coordinators advertise covering key factors, for example, drivers and restrictions
11-21-2017 | Industry, Real Estate & Constr …
business news
Global Contact Grills market 2017 - Westahl, Falcon, Dualit, Livart, Zojirushi
Apex Market Reports, recently published a detailed market research study focused on the "Contact Grills Market" across the global, regional and country level. The report provides 360° analysis of "Contact Grills Market" from view of manufacturers, regions, product types and end industries. The research report analyses and provides the historical data along with current performance of the global Contact Grills industry, and estimates the future trend of Contact Grills market
09-14-2017 | Business, Economy, Finances, B …
market research 2017
Contact Grills Market Analysis 2017-2022 Delonghi, Breville, Westahl, Falcon
Global Contact Grills Market by manufacturers, Types, Segment and Region A market study based on the " Contact Grills Market " across the globe, recently added to the repository of Market Research, is titled ‘Global Contact Grills Market 2017’. The research report analyses the historical as well as present performance of the worldwide Contact Grills industry, and makes predictions on the future status of Contact Grills market on the basis of
08-18-2015 | Business, Economy, Finances, B …
A&O Lighting Technology GmbH
FALCON® BEAM 2 – A&O Technology launches new searchlight
In the new FALCON BEAM 2, A&O Technology is bringing a brilliant new searchlight onto the market. With its extended feature set, the FALCON BEAM 2 is now the first choice for demanding illuminations in the fields of entertainment and architectural lighting. Thanks to a new high-precision parabolic reflector with an ultra-reflective coating, the FALCON BEAM 2 guarantees dazzling brightness. The colour changer is based on the tried-and-tested technology
Comments about openPR
We publish our press releases on openPR.de because we like people who are "open" - just like us.
Frank Obels, CEO, INCONET - Informationssysteme, Communication und Netzwerkberatung GmbH