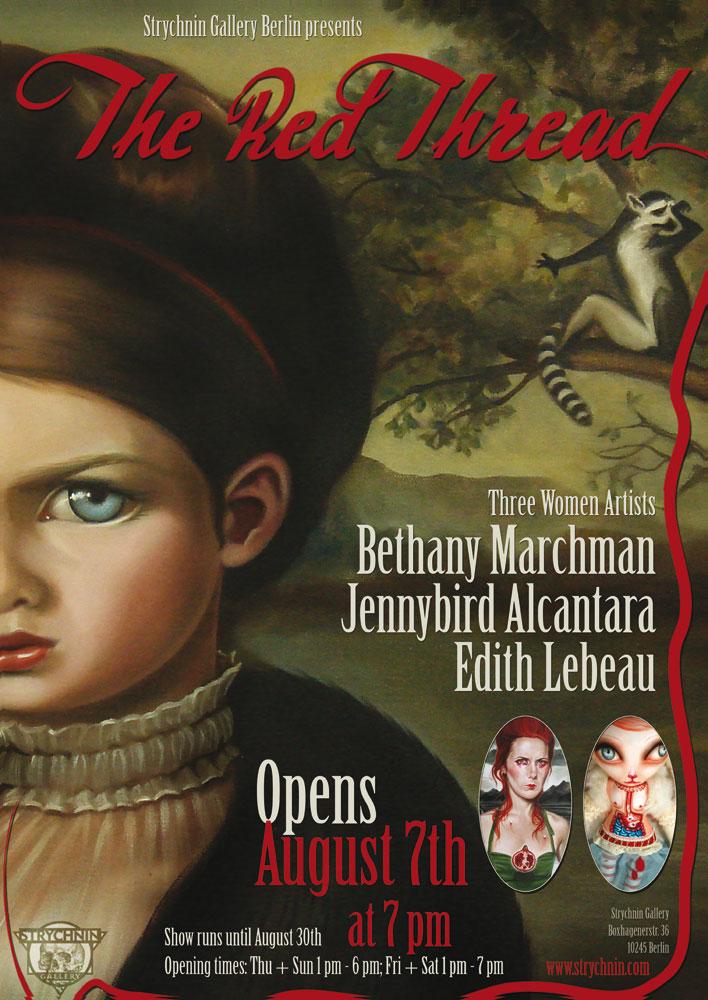 A Group Exhibition featuring Three Strong Women: Bethany Marchman, Edith Lebeau and Jennybird Alcantara. Opens August 7th from 7 pm until 11 pm Somewhere between traditional techniques and the influence of contemporary pop culture, three women artists from the USA and Canada create strong women portraits. Whether in oil, acrylics, or as curious hand-made dolls that are reminiscent of characters created by Tim Burton: Strychnin Gallery’s August exhibition presents unique works of great expressive power. Bethany Marchman’s paintings quote from a rich variety of sources. Humorous as well as melancholic undertones enchant the viewer and encourage him to ponder meanings, for example whether growth is always synonymous with improvement. Marchman’s miniatures are highly political and the current state of affairs has long caught up with their traditional appearance. Yet Marchman’s works are also popular with pop culture enthusiasts: her works could recently be seen in the comedy hit “Juno” with Jason Bateman and Jennifer Garner. Jennybird Alcantara’s oil paintings are mainly done on wood. Inspired by her own paintings, however, she also creates delicately crafted dolls. She says: “My work has at its core a narrative; I like to explore the complex interconnectedness of opposites as seen through the prism of myth, fable and fantasy. I use the symbolism of duality to explore the connection of life and death, as well as the relationship between the beauty and cruelness of nature, that of the natural world as well as human and animal nature.” Jennybird Alcantara‘s beautifully eerie dolls will be seen in Europe for the first time at Strychnin Gallery in Berlin. Edith Lebeau grew up in Beloeil, a little town of Quebec, Canada. As a young girl, her artistic development was influenced by a fascination with popular culture, Greek, Roman, and Celtic mythology, movies and fairytales – influences that continue to be seen in her work today. Lebeau mostly paints female figures, portraying them as superheroes, villains, goddesses, and nymphs, their look being the most important thing in her work: they tell their own story through their expressions and emotions. A certain ambiguity is intentional – Lebeau often blurs the story to encourage the audience to make it their own, letting the character question the viewer. Opening night: August 7th, 2009, 7 p.m. End date:August 30th Opening times: Thu - Sat 9 – 12 and 21 – 24; Sun 21 – 24 With galleries in three bustling hotspots – New York City, Berlin, and London – Strychnin Gallery is a playground for artists from all around the globe. It is a place where collaboration is encouraged, new projects are constantly developed and creativity is the one and only thing that truly counts. Owned by charismatic curator Yasha Young, Strychnin is dedicated to presenting emerging American artists to the European art world and vice versa. It features a variety of artists with particular individual styles rather than artists belonging to a collective “hip” movement. If you insist on putting a label on them, try lowbrow turned highbrow, pop surrealism or fantastic realism among others. Founded in Brooklyn in 1998, the gallery opened a European showroom in Berlin in 2002. The US gallery has since moved to a location in Manhattan’s Chelsea district, opening with a group show featuring over 70 artists in October of 2006. Strychnin Gallery opened a third location in East London’s vibrant art scene right off of Brick Lane in October 2007. The gallery participates in major international art fairs on a regular basis, including Bridge Art Fair, Liste, or Art21 in Cologne, which appointed gallery owner Yasha Young to its selection committee in 2008. Strychnin Gallery Boxhagenerstr. 36 10245 Berlin www.strychnin.com PR contact: Iris Bitter Phone: +49 30 9700 2035

You can edit or delete your press release Strychnin Gallery Berlin presents: The Red Thread here