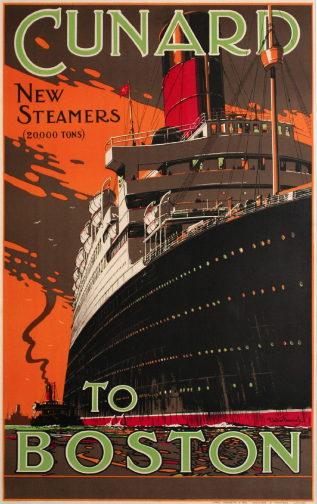 Advertisement for Cunard to Boston

BOSTON – International Poster Gallery proudly announces its 16th Annual Summer Poster Show featuring a spectacular collection of original vintage travel posters from the last 100 years. The exhibition runs July 2009 through September 7, 2009. Gallery hours are Monday through Saturday 10 am to 6 pm and Sunday noon to 6 pm. The Gallery is located at 205 Newbury Street in Boston.

Travel has been one of the most popular and widespread poster categories since the medium’s birth in the late 19th Century. The exhibition focuses on the fascinating changes in travel and travel posters over four periods – the 1890s to WWI, the Twenties, the Thirties, and the Postwar era of the Fifties and Sixties. It traces the roots of the travel poster from the early days of train travel through the golden era of the ocean liner, zeppelin and jet plane. Selections are taken from International Poster’s world-leading collection of more than 1200 travel posters.

The exhibition opens with a poster by Hugo d’Alesi, the so-called “father of the travel poster.” Most early travel posters were done in “The Information Style,” with overloaded text, detailed train schedules and small inset pictures that created graphic confusion and little visual impact. D’Alesi’s Tunisie poster from around 1892 includes one inset but is now dominated by a succinct headline and a coherent large graphic of a caravan heading into the desert. In his roughly 100 posters for the French railways, D’Alesi would lead the way to a more organized and elegant style that was dubbed “The Landscape Style”.

In the Teens and early Twenties, the Landscape style of painterly illustrated posters would yield to Simplified Realism, a more graphic and modern approach with simplified details, clean typography and abstract areas of flat color. A fine example is Walter Thomas’ towering Cunard to Boston, showing a new steamer heading out to sea. Another leading practitioner of this style was Roger Broders, who created nearly 100 posters for the PLM railway. His poster of Florence – Chemin de Fer PLM, 1921, is arguably the most beautiful nighttime travel poster and the finest of all posters of the Renaissance city.

By the late Twenties, travel posters shifted dramatically to a new Machine Age style, led in Paris by the revolutionary A. M. Cassandre. Strongly influenced by modern art, Cassandre’s Art Deco style shocked the public with its dynamic compositions, abstract geometry, new typographic styles, and tight interplay of word and image. Unlike his predecessors who portrayed travel destinations, Cassandre focused on the transportation marvels of the Roaring Twenties. His poster of the great French ocean liner, Normandie, exhibited here in its rare 1938 variant celebrating its 60th voyage, uses the graphic language of Surrealism to create an imposing masterpiece. Everything from the flock of tiny birds to the upward sweeping vantage point is designed to accentuate the ocean liner’s scale and stately character.

Cassandre’s versatile and cerebral style was difficult to mimic, but its influence was enormous around the world. For example, his pioneering use of photomontage in travel posters was followed by a remarkable series by Herbert Matter for Swiss ski resorts. In many ways Matter’s posters can be viewed as the climax of the artistic travel poster, with their surrealistic juxtapositions of scale and constructivist energy.

The outbreak of World War II brought the Golden Age of Travel abruptly to a close. After the war, travel was transformed by a huge worldwide fleet of new turboprops, with their ability to fly faster, farther and more reliably. All this opened up an era of mass transportation. Coach class became common as fares dropped sharply and for the first time tourists became as active as government and business travelers. By the early Sixties, with the advent of the Boeing 707 jet, almost anyone could afford to fly.

Travel posters were revitalized by this new demand. Air France continued to create classic, richly printed posters reminiscent of pre-war years, but the rapidly expanding American carriers brought out the best of Madison Avenue to create memorable brand images. Outstanding and well represented in the show are TWA posters by David Klein, United by Stan Galli, and Swissair by Herbert Leupin.

The primary shift was away from Art Deco towards a relaxed, playful style that emphasized wit and charm for “Everyman” destinations like San Francisco, Hawaii and Disneyland. For example, Klein’s hip poster for Las Vegas highlights the city’s day and nighttime attractions. The poster is cleverly split in two, with Sin City’s nocturnal delights – most notably gambling – on the left against poolside palms and cocktails on the right. The design converges in the middle, bisecting the figure of an elegant woman, dressed in a glittering evening gown and striped swimsuit respectively.

By the Seventies, most of the charm and glamour of travel posters was gone. Illustration was usually replaced by color photography. There were exceptions - in the 1970s, Bernard Villemot, who studied with Paul Colin in Paris, created a fine series for the French National Railroad. In the Eighties, the revival of the Simplon Orient Express led to a delightful poster series by Fix-Masseau. And most recently, United Airlines has created a fine series for cities around the world.

“Travel posters account for some of the most bold and iconographic designs in this medium,” comments gallery owner, Jim Lapides. “These pieces evoke an irresistible curiosity and desire for adventure, and have been doing so for over 100 years. In our 15 years on Newbury Street, the gallery has become well-known for its strong collection of original travel posters.”

You can edit or delete your press release Time Travel: A Century of Travel Posters at International Poster Gallery here

11-16-2016 | Arts & Culture
Boston Center for Adult Education
The Holidays in Boston: A Photo Excursion
WHAT: The streets of Boston come alive during the holidays, and on December 8th, 2016, the Boston Center for Adult Education (BCAE), along with Ron Phillips of Hunt’s Photo & Video, are helping students capture every seasonal sight through the lens. In “The Holidays in Boston: A Photo Excursion,” students will venture through Boston on-foot to capture the rare
10-26-2012 | Business, Economy, Finances, B …
Business Networking International
BOSTON BUSINESS NETWORKING GROUP INDUCTS NEW PRESIDENT
The Rainmakers Chapter of Business Networking International, (BNI), has inducted a new president, Chris Lehmann of Eastern Sun Acupuncture, at its recent meeting. Handing over the role is outgoing president, John Sullivan of PDM Associates. “Chris will handle the challenges and build upon our successes”, John observed, “having done a great job on our team.” “We have many, many opportunities for business people to learn how to better communicate about
01-17-2012 | Politics, Law & Society
Milligan Coughlin LLC
Boston DUI Attorney
The attorneys at Milligan Coughlin are dedicated to defending the rights, future, and liberty of their clients that have been accused of a crime. Every person accused of a crime in the United States has Constitutional rights that even they may not know about The criminal defense team at Milligan Coughlin puts their client first in every single case, ensuring the rights of their clients are maintained through zealous representation
01-09-2012 | Politics, Law & Society
Boston Criminal Lawyer
Boston Criminal Lawyer
When looking for a Boston criminal defense attorney, look no further than the attorneys at Milligan Coughlin. The experience combined at Milligan Coughlin offers every individual accused of a crime the security that comes from knowledgeable representation one might expect at a large firm, while maintaining the personal touches and accessibility that is ideal from a small firm. The Boston Criminal Lawyer team at Milligan Coughlin work side by side
12-10-2011 | Business, Economy, Finances, B …
BNI Business Network International
BOSTON BNI CHAPTER SUPPORTS TOYS FOR TOTS
The Rainmakers Chapter of Business Networking International (BNI) donated toys for the Marine Corps “Toys for Tots” campaign. The group’s president, John Sullivan, noted,” This is the ninth year the BNI Rainmakers members have contributed to the program.” Pictured are left to right: Jim Martin (Armada Group), Judy Jose-Roddy (Sophia Snow Place), Donald Schiarizzi (ReMax R.E.), Jeff Thomas (J. Thomas Insurance), Chris Lehmann (Eastern Sun Acupuncture), (REAR) Sean Sullivan (The
12-31-2010 | Business, Economy, Finances, B …
marchremodeling.com
Bathroom Remodeling Boston
Having a dream home is probably the most common dream. Yes, it is the dream of every individual to think of the bed room this way, attic that way, bathroom with exact fittings and many other things. Home remodeling services are popular everywhere, and that include Boston also. There are a number of companies offering Boston remodeling services. It is quite tough to pick a company from a long
Comments about openPR
We publish our press releases on openPR.de because we like people who are "open" - just like us.
Frank Obels, CEO, INCONET - Informationssysteme, Communication und Netzwerkberatung GmbH