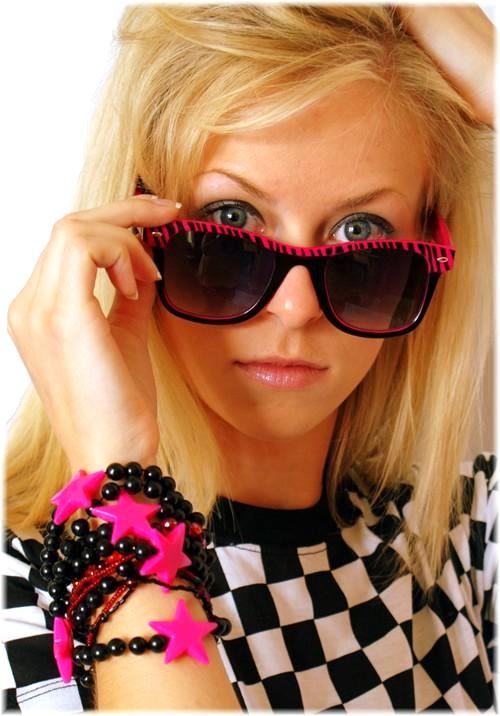 Current Face of Plymouth Debbie Grayson has taken part in photo shoot organised by Little Black Cherry, online shop with alternative wear. It took place on Sunday, 21st June 2009 in Plymouth, and photos were taken by young talented Plymouth photographer Rebecca Bond. Debbie posed in Summer collection of sunglasses, T-shirts and Skinny Jeans. Photos from this session are published on shop’s website www.litleblackcherry.co.uk and major social networking sites as well as used for further internet and media promotion. It’s a great chance for Debbie to build her portfolio, and get international web and media attention. It also proves that Plymouth Herald’s contest winner is widely versatile and finds herself comfortably presenting teenage fashion, too. Also for Rebecca, photographer and young mum, it’s a opportunity to show off her skills as fashion photographer. Debbie, 21 won The Herald’s competition in July 2008. She still celebrates her year as city’s glamour representative. She overshadowed hundreds of participants last year in order to win the main prize. This popular event is in it’s fourth year now, and as Mike Jones, one of the organisers, said ‘The Face Of Plymouth has grown to become one of the city’s most anticipated events. It’s not just about looks, but about the sort of person you are.’Marlene Tuczapska, owner of Little Black Cherry, was very excited to work with both ladies, sharing fresh ideas for original shots. Marlene said: “This photo shoot proves again how LBC supports young local talents to show their skills and be seen both in UK as worldwide. It was real pleasure to work with Rebecca and Debbie. They are both talented and amazingly versatile and I look forward to working with them again.”Dream Accessories t/a Little Black Cherry – an online shop based in Plymouth, St. Jude’s. Selling alternative fashion, street wear, it covers young market of 16 – 35 years old. Established in September 2007, it has quickly became recognised brand for Punk and Emo fashion. Owner: Marlene Tuczapska.Dream Accessories t/a Little Black Cherry 5 Egerton Place Plymouth PL4 9DE EnglandMarlene Tuczapska