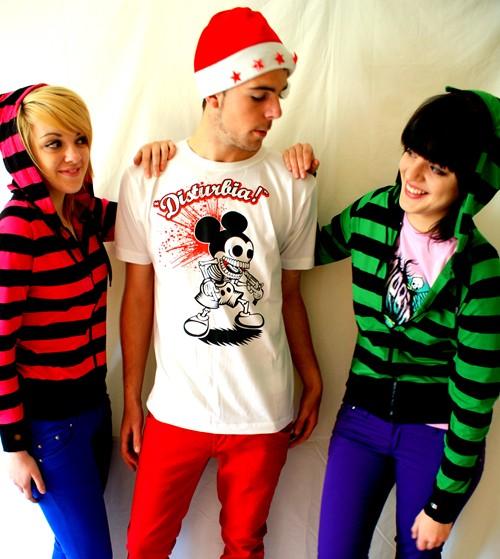 Marlene Tuczapska from littleblackcherry. co.uk has teamed up with Face of Plymouth’08 and photographer Rebecca Bond for Christmas Photoshoot. It’s main purpose was to showcase store’s new arrivals: Men’s and Ladies Vacant T-shirts, Fingerless Gloves and Jewellery. Professional eye of Rebecca Bond, young Devon’s photographer created relaxed atmosphere. Along Debbie posing for photos were Clinton Richard Lancaster, experienced young model, and just starting up Shelby Whyte and Ruta Kazenite. Rebecca and Debbie are often seen working together, and Marlene was happy to join forces once more with the talented duo. Clinton Lancaster was glad to model with Debbie again, as both met during their preparation for Face of Plymouth 2008 contest. All items were set together in urban outfits with shop’s classic bestsellers: Kitty Ears Hoodies, Skinny Jeans and Scene Queen Jewellery. Four models had great fun posing for the photos. Ruta and Shelby enjoyed posing as two Elves competing for attention of Father Christmas – Clinton. Little Black Cherry proved once more to support local talents and create opportunity for young models and photographers to be seen and appreciated worldwide. Marlene has got great experience in online marketing, and all photos are being strongly promoted on the internet, with focus on prime Google placement, as well as being featured on popular social sites as Facebook, MySpace, You Tube, Twitter and more. Little Black Cherry has been featured not a long ago on Channel 4 website, as Hollyaoks’ Laura was spotted wearing LBC Pink Chequered Emo Hoody. Marlene has just returned from London Edge, international Trade Show, from where she brought new stock, in order to prepare for Christmas time. Fresh arrivals in the shop are Vacant Men’s and Ladies T-shirts full of cult characters, and hit straight from USA – NewBreed Girl T-shirts, so popular on highstreet, and also seen in Topshop. It proves Little Black Cherry’s changing face, as it’s moving from ‘underground’ fashion to mainstream, bringing big labels and highest quality clothing along. Little Black Cherry is online shop based in Plymouth, with two years of trading experience. Selling urban Hooded Jackets, T-shirts, Skinny Jeans and Accessories, it’s focused on young market of 13 – 35 year olds. Marlene tries to keep up with latest trends on Scene Emo fashion, which dictates what’s next appearing on a website: from funky Kitsch Jewellery to Neon Clothing and Accessories. All Photos are available to view online at: http://www.littleblackcherry.co.uk/autumn-gear---catalogue-2009-7-w.asp Dream Accessories t/a Little Black Cherry – an online shop based in Plymouth, Devon. Selling alternative fashion, street wear, it covers young market of 16 – 35 years old. Established in September 2007, it has quickly became recognised brand for Punk and Emo fashion. Owner: Marlene Tuczapska. Little Black Cherry 5 Egerton Place Plymouth PL4 9DE United Kingdom

12-14-2017 | IT, New Media & Software
GamerKeyz
GamerKeyz Christmas
GamerKeyz just opened we buy game key codes in bulk so you pay less for the games you love. For Xmas we are offering buy one game get one free until Xmas day! For every game you buy you will receive a random Steam game key which will be delivered to your inbox on Xmas morning. We have 680 Steam games for sale now, we are about to add Origin
12-28-2010 | Fashion, Lifestyle, Trends
Phuket Ocean Villas Co. Ltd.
Christmas in Phuket
Phuket, Thailand: Thailand is a 95% Buddhist country so Christmas is not a festival that officially appears in the Thai calendar, but with a large ex-pat community and Thais who love an excuse to have fun, Christmas is celebrated in fine spirit every year - especially in Phuket. In fact, they started playing Christmas carols in Phuket’s Tesco on 19th November which took me by surprise. Then I noticed the frozen
12-23-2010 | Health & Medicine
IndianDiabetics
Christmas Celebration with Indiandiabetics
Enjoy Christmas, it is a time for celebration and eating for everyone…a little of what you fancy over Christmas will definitely do you good…an odd high glucose reading shouldn't affect your long term control or health or health. 1. Stick with sugar free or diet drinks, or fresh fruit juice only with meals. Fresh fruit juice has lots of natural sugar which will send blood sugars high if taken. 2. Save your selection boxes
12-22-2010 | Politics, Law & Society
Michael Prell
Merry Christmas
’Tis The Season To Celebrate The Annual Festive Tradition Of Refusing To Call Christmas “Christmas.” 68% of Americans say they prefer to be greeted with “Merry Christmas” and not “Happy Holidays” and yet each year the Anti-Christmas Brigade takes to the streets, and takes to the airwaves, to protest against Americans calling Christmas by its name. Why is that? Sometimes the best way to understand why people do what they do is to
11-12-2010 | IT, New Media & Software
DealAbout.com.au
Special Christmas Gift Ideas
A special Christmas feature has been added to Dealabout.com.au web store under which an innovative gift idea will be revealed each day starting 01/11/2010 until 31/12/2010. The manager of this store said customers who are looking for an effective way to hunt for Christmas gifts can greatly benefit from this segment. “A boring gift is the last thing you would want to give to your loved ones in Christmas,”
11-24-2009 | Energy & Environment
TiSUN Gmbh
Last Christmas
The Tyrolean solar specialist keeps it Christmas promise. TiSUN has donated a solar system to the children at the Mordecai orphanage in Port Elizabeth (South Africa) and had it fully installed, free of charge. A project to improve health conditions for orphans who have lost their parents to AIDS has now been carried out. The system became operational in early September and provides hot water for two showers and a bathtub.
Comments about openPR
OpenPR ist the nicest and most clearly laid out PR platform I have seen to this day. The press releases are displayed very nicely and clearly and without any unnecessary frills. The updates are fast and the finished release looks appealing and is clearly legible. Even with 16 years of experience one discovers new things from time to time. Congratulations!
Gabriele Ketterl, Director Marketing & PR, Menads