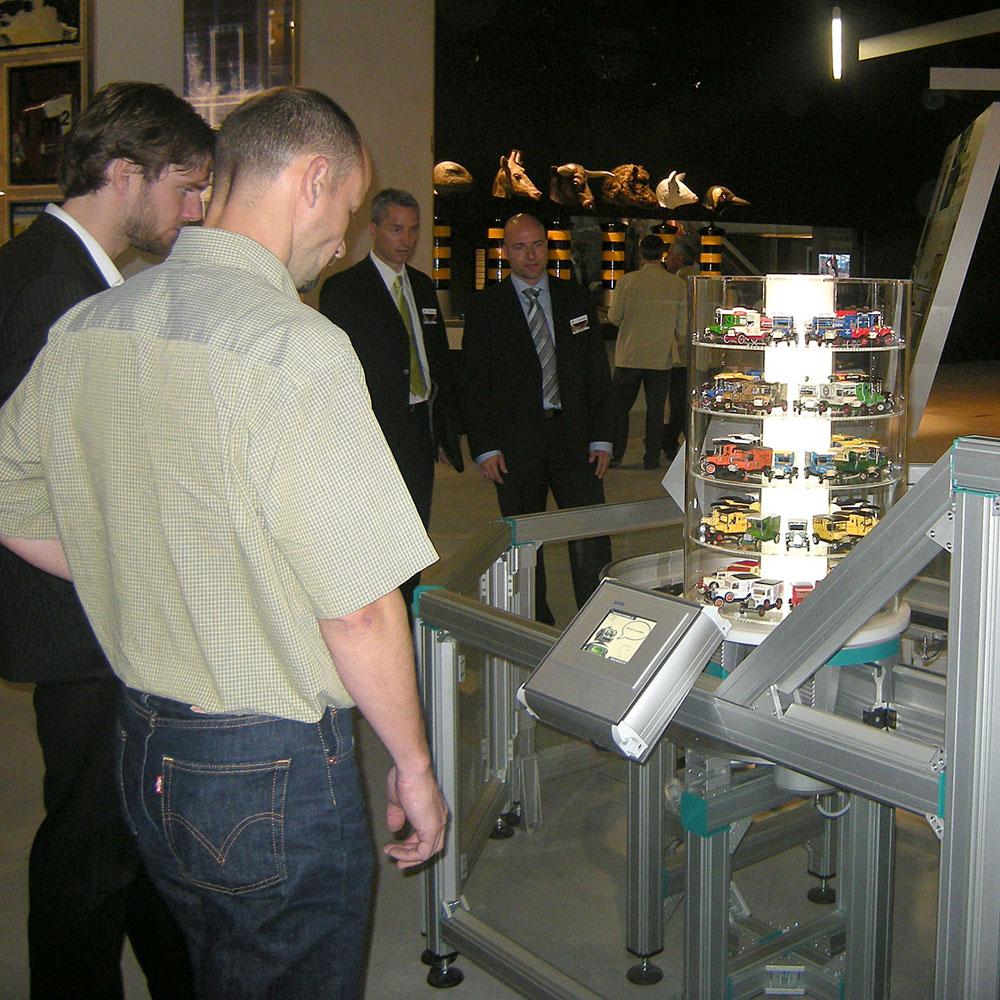 The watching station on the Montrac line

Inaugurated on 27 June 2009, the new Road Transport Hall of the Swiss Museum of Transport in Lucerne is equipped with a Montrac system handling the presentation of 3000 Matchbox cars.The idea to present the Matchbox cars with a Montrac system was conceived and developed by the museum in cooperation with Montech. 40 shuttle run along 36 meters of monorail track, carrying 3000 miniature models from all categories and times. The Montrac system is built on three levels for a total height of four meters and hangs from the hall ceiling. Via a touchscreen display, visitors can retrieve a showcase to take a close look at the Matchbox cars at two rotating stations. A lift takes the shuttle with the requested showcase down to the visitor’s watching level.Interactive miniature warehouse Used in the museum as a sort of miniature warehouse, Montrac provides for a spectacular presentation of a huge portion of one of the richest and most complete Matchbox collections in Europe to a wide audience. “As an innovative Swiss company, we are proud that our intelligent transport system Montrac has been adopted in the most visited museum in Switzerland,” said Alessandro Sibilia, CEO Montech AG. This example shows how flexible the Montrac system is, added Sibilia. “Its application opportunities are virtually unlimited.”The Swiss Museum of Transport in Lucerne is an exhibition and interactive area offering visits and hands-on experience in the world of transport and communications. The museum has national and international relevance. The new Road Transport Hall features a unique facade made with 344 road signs for long-range, local and urban traffic. On June 27, the museum, which is the most visited in Switzerland with 820,000 people each year, celebrated its 50th anniversary.Montech AG markets basic modular components that automate demanding production and logistics processes. In addition to conventional conveyor belts, automation components and the Quick-Set profile system, the range of products also includes the Montrac transport system. Montrac is an intelligent transport system for networking industrial production and logistics processes. Founded in 1963, the company is based in Switzerland and stands for innovation in the automation industry.Montech AG Gewerbestrasse 12 CH-4552 Derendingen Phone: +41 (0)32 681 55 00 Fax: +41 (0)32 682 19 77 www.montech.com E-Mail: info@montech.com Presscontact Elke Manthei Phone: +41 (0)32 681 55 42 E-Mail: elke.manthei@montech.com

12-23-2010 | Industry, Real Estate & Constr …
Montech AG
Montrac presents automated warehouse integration at LogiMAT 2011
The monorail transport system Montrac allows to create a link between warehouse and production, for instance. This application, interesting for companies across several industries, will be presented by the Swiss manufacturer at the upcoming LogiMAT in Stuttgart, Hall 3, Booth 171. The self-moving shuttles, equipped with a belt for automatic loading and unloading, travel between the warehouse and production area according to the instructions of the central control system, running on
02-04-2010 | Logistics & Transport
Montech AG
Montech at LogiMAT 2010
The Swiss intralogistic specialist Montech AG is exhibiting at LogiMAT 2010, showing the Montrac transport system and its range of belt conveyors. From 2 to 4 March 2010, at LogiMAT, Hall 1, Booth 407, Montech will show how many companies could optimize their intralogistic and increase efficiency by adopting the Montrac system. “The efficiency of operations in all company areas, especially intralogistics, is more and more critical,” said Gianluca Aloisi,
10-30-2009 | Energy & Environment
Montech AG
24th European Photovoltaic Solar Energy Exhibition: specific solutions from Mont …
At the 24th European Photovoltaic Solar Energy Conference and Exhibition (PVSEC), from 21 to 24 September 2009 in Hamburg, Montech presented specific solutions for the transport and handling of wafers, cells and carriers. With over 40,000 visitors, PVSEC was one of the major exhibitions for the photovoltaic industry this year. In Hamburg, 943 manufacturers, suppliers and service providers from all around the world exhibited their innovations on a 65.000 sqm area.
10-13-2009 | Logistics & Transport
Montech AG
Optimized intralogistics with Montrac
The Montrac transport system by the Swiss company Montech optimizes intralogistic operations and increases productivity. “The issue of intralogistics is becoming more and more important,” says Yves Dicke, Manager Montrac of Montech. More and more companies are willing to deploy automated solutions to transfer small plastic parts produced by their injection molding presses. “Normally, the parts are transported manually or by means of fork-lift trucks to a buffer area,
06-04-2009 | Logistics & Transport
Montech AG
New set-up for Montrac in the Americas
FlexLink and Montech agree to a new distribution partnership for the Montrac monorail pallet system in North and South America. The Montrac monorail pallet based conveying system is recognized for its high-tech production logistics applications in manufacturing, assembly, and test processes. It is used within the electronics, health care, and plastics industries in clean room applications up to class 10. FlexLink and Montech have entered into a partnership to increase
03-23-2009 | Logistics & Transport
Montech AG
Automated connection to the warehouse with Montrac
At the intralogistic show LogiMAT 2009 in Stuttgart, Montech introduced a solution for the automated connection of the warehouse, based on the transport system Montrac. The solution is particularly interesting for companies looking for a way to link their warehouse with production or other facilities. The self-moving shuttles, equipped with a belt for automatic loading and unloading, travel between the warehouse and production area according to the instructions of
Comments about openPR
I can't but agree to the positive statements about your portal: easy to use, clear layout, very good search function, and quick editing!
Jens O'Brien, Borgmeier Media Communication