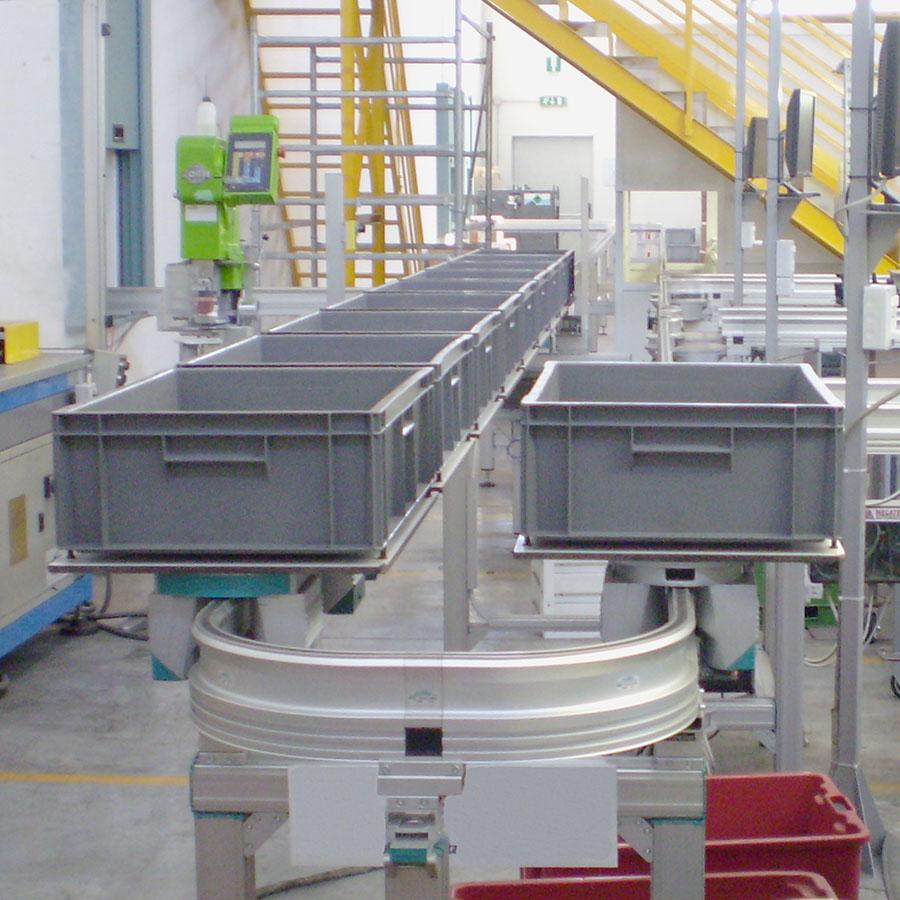 At the intralogistic show Logimat 2009 in Stuttgart, Montech is featuring a range of applications of the Montrac system, which has enabled many companies to optimize their material flows and consequently their intralogistic operations. The Swiss company will show how customers could optimize their intralogistic and increase efficiency by adopting the Montrac system. “The efficiency of operations in all company areas, especially intralogistics, is more and more critical,” said Yves Dicke, Montrac Division Manager at Montech AG. “Often, however, a conventional transport system cannot meet more and more sophisticated intralogistic needs. Therefore, new solutions are required.” For 13 years now, Montrac has proved that it can optimize logistic and production operations and revolutionize internal flows. Versatile applications Montrac was launched in 1996 after two years of research. Since then, more than one thousand Montrac plants have been installed in different industries all over the world, from automotive to plastic processing, up to pharmaceuticals, as evidence of Montrac’s versatile application. Customers that have adopted Montrac for their intralogistic management include Hella, Triom, Alpla Lübecker Kunststoffwerk, Tech-Pol, BMW, Continental Automotive, Hörmann Antriebstechnik, Rexam Pharma, Vetter Pharma-Fertigung and SEIKO.News: Montrac shuttle with RFID technology The shuttle with RFID technology is a development that aims at enhancing the intralogistic process management. The innovation is that the route is defined by the carried product and not by the shuttle, as it has been so far. This is how it works. The product lying on the shuttle is provided with a transponder that contains information about the product’s route along the track. While on the shuttle, the transponder is written through the Intelligent Routing Module (IRM) by means of a serial interface. The RFID read/write unit is integrated in the shuttle. When the transponder is outside the Montrac system, it can be written using a standard RFID unit. In this way, the products can be replaced along the track and they will still reach the “correct” destination, thanks to the RFID marking.More flexibility for users “Maximum product flexibility is an essential premise to meet customer requirements flexibly and to provide maximum flexibility to users,”, adds Dicke. Montrac delivers such flexibility from different standpoints, such as future extensions or modifications to the plant, adapting to available space, modularity and compatibility of components.All Montrac system components are based on the same platform and are mutually compatible. The monorails can be supplied in any length. Bypasses, switches and curves (with 280 mm minimum radius) feature a compact design so that the system can be adapted to actual space availability. The Trac monorails and TracLink connection elements ensure quick and easy assembling: two tools are all it takes to install a Montrac line or to adapt it to new situations and requirements. In this way, the layout flexibility is virtually unlimited. Also in terms of costs, Montrac is a model of optimization, explains Dicke. Montrac operation is fully electric, so that all pneumatic components and connections are eliminated. Power is supplied directly through the monorail, therefore the systems requires no cabling, except for minimal wiring in specific applications. The control system can thus be minimized or totally eliminated.Conveyors based on standard components At Logimat, in Hall 1, Stand 511, Montech will also exhibit small and big conveyors, plus other models based on a modular concept with ready-to-use components. Thanks to their modularity, the conveyors can be assembled in variable configurations, extended or shortened with a simple and cost-effective approach. The conveyors have standard widths included between 45 and 800 mm and they can carry up to 125 kg weight, while their length can be selected freely up to 15 meters in one millimeter steps.Montech AG markets basic modular components that automate demanding production and logistics processes. In addition to conventional conveyor belts, automation components and the Quick-Set profile system, the range of products also includes the Montrac transport system. Montrac is an intelligent transport system for networking industrial production and logistics processes. Founded in 1963, the company is based in Switzerland and stands for innovation in the automation industry.Montech AG Gewerbestrasse 12 CH-4552 Derendingen Telefon: +41 32 681 55 00 Fax: +41 32 682 19 77 www.montech.com E-Mail: info@montech.com Presscontact: Elke Manthei Telefon: +41 32 681 55 42 E-Mail: elke.manthei@montech.com

12-23-2010 | Industry, Real Estate & Constr …
Montech AG
Montrac presents automated warehouse integration at LogiMAT 2011
The monorail transport system Montrac allows to create a link between warehouse and production, for instance. This application, interesting for companies across several industries, will be presented by the Swiss manufacturer at the upcoming LogiMAT in Stuttgart, Hall 3, Booth 171. The self-moving shuttles, equipped with a belt for automatic loading and unloading, travel between the warehouse and production area according to the instructions of the central control system, running on
02-04-2010 | Logistics & Transport
Montech AG
Montech at LogiMAT 2010
The Swiss intralogistic specialist Montech AG is exhibiting at LogiMAT 2010, showing the Montrac transport system and its range of belt conveyors. From 2 to 4 March 2010, at LogiMAT, Hall 1, Booth 407, Montech will show how many companies could optimize their intralogistic and increase efficiency by adopting the Montrac system. “The efficiency of operations in all company areas, especially intralogistics, is more and more critical,” said Gianluca Aloisi,
10-30-2009 | Energy & Environment
Montech AG
24th European Photovoltaic Solar Energy Exhibition: specific solutions from Mont …
At the 24th European Photovoltaic Solar Energy Conference and Exhibition (PVSEC), from 21 to 24 September 2009 in Hamburg, Montech presented specific solutions for the transport and handling of wafers, cells and carriers. With over 40,000 visitors, PVSEC was one of the major exhibitions for the photovoltaic industry this year. In Hamburg, 943 manufacturers, suppliers and service providers from all around the world exhibited their innovations on a 65.000 sqm area.
10-13-2009 | Logistics & Transport
Montech AG
Optimized intralogistics with Montrac
The Montrac transport system by the Swiss company Montech optimizes intralogistic operations and increases productivity. “The issue of intralogistics is becoming more and more important,” says Yves Dicke, Manager Montrac of Montech. More and more companies are willing to deploy automated solutions to transfer small plastic parts produced by their injection molding presses. “Normally, the parts are transported manually or by means of fork-lift trucks to a buffer area,
07-01-2009 | Logistics & Transport
Montech AG
Matchbox cars ride with Montrac
Inaugurated on 27 June 2009, the new Road Transport Hall of the Swiss Museum of Transport in Lucerne is equipped with a Montrac system handling the presentation of 3000 Matchbox cars. The idea to present the Matchbox cars with a Montrac system was conceived and developed by the museum in cooperation with Montech. 40 shuttle run along 36 meters of monorail track, carrying 3000 miniature models from all categories and times. The
06-04-2009 | Logistics & Transport
Montech AG
New set-up for Montrac in the Americas
FlexLink and Montech agree to a new distribution partnership for the Montrac monorail pallet system in North and South America. The Montrac monorail pallet based conveying system is recognized for its high-tech production logistics applications in manufacturing, assembly, and test processes. It is used within the electronics, health care, and plastics industries in clean room applications up to class 10. FlexLink and Montech have entered into a partnership to increase
Comments about openPR
We publish our press releases on openPR.de because we like people who are "open" - just like us.
Frank Obels, CEO, INCONET - Informationssysteme, Communication und Netzwerkberatung GmbH