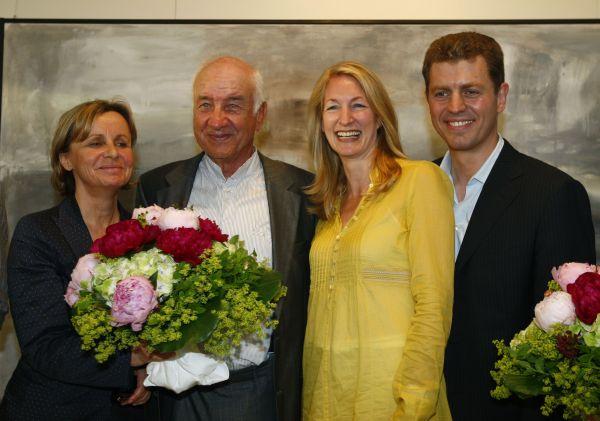 from left Armin and Gabriele Mueller-Stahl, Gudrun and Robert Ketterer

Munich, 22 June 2009 (kk) – The new Ketterer Kunst headquarters next to Messe Munich are certainly impressive. The House for Art deploys 3500 m2 of surface area, which includes a spacious auction room, light-filled exhibition rooms and a library with some 1000 m of shelf space. A highlight is what is probably the world’s largest art show window measuring eight metres in height and 23 metres across. On 18 June 2009 the new Ketterer Kunst headquarters were inaugurated with grand summer festivities preceding the Welcome Auctions. The guest of honour was the actor Armin Mueller-Stahl, who is showing his new works of art as well as classics from his œuvre until 31 July 2009 at the special Ketterer Kunst exhibition “Menschenbilder, Zyklen und Lebenslinien” [“People Pictures, Cycles and Lifelines”]. “It is a great honour to be able to show the works of a universal genius like Armin Mueller-Stahl. I am delighted that we can present such a world-class contemporary artist,” thus Robert Ketterer, auctioneer and owner of Ketterer Kunst.Some 900 guests from all over Germany accepted the invitation extended by their host and his wife, Gudrun. The distinguished guest list included film producers Quirin Berg, Max Wiedemann and Gabriela Sperl, Metro chairman of the board Eckhard Cordes, Freifrau Uschi Dämmrich von Luttitz, Alexander Dibelius, CEO of Goldman Sachs Germany, television presenter Florian Fischer-Fabian, Dr. Olaf Goettgens, director of Rodenstock, Professor Dr. Florian Hufnagl, director of the Pinakothek der Moderne, Professor Dr. Marion Kiechle and television presenter Marcel Reif, designers Sonja Kiefer, Lola Paltinger and Susanne Wiebe, actors Cosima von Borsody, Monika Peitsch and Michael Roll, directors Gernot Roll and Sharon von Wietersheim.The guests were entranced with the works exhibited and the design of the new building for art. Käfer Party Service provided elegant refreshments. To match the occasion, frames in enormous formats transformed the buffets into tableaux vivants in which chefs prepared fresh pasta, wok and grill specialities for the guests while they watched. The Summer Fest was the prelude to the Welcome Auctions of 19 and 20 June 2009. On those two days, over 320 lots will be called at four thematically different auctions. The first auction on the first day is devoted to Old Masters and Art of the 19th Century: works include Adolph von Menzel’s “Blindekuh” [“Blind-man’s Buff”] (estimate: € 80 000-120 000) and works by Wilhelm Busch, Franz von Defregger and Albrecht Dürer. It will be followed by Modern Art (1900-1945) with a cast made in the artist’s lifetime of the Ernst Barlach bronze “Der Geistkämpfer” [“Spirit Fighter”] (estimate: € 150 000-250 000). The second day will start with the special Bauhaus auction hosted jointly with the Munich auction house Quittenbaum, to be followed by the auction Post War/Contemporary Art, featuring works by Emil Schumacher, Lucio Fontana, Stephan Balkenhol and Tom Wesselmann.Since it was founded in 1954, Ketterer Kunst has been firmly established in the front ranks of auction houses dealing in art and rare books with headquarters in Munich and a branch in Hamburg. Gallery rooms in Berlin as well as representatives in Heidelberg, Krefeld and Ravensburg have contributed substantially to the company's success. Ketterer Kunst has further rounded off its portfolio by acquiring the prestigious Ernest Rathenau Verlag, New York/Munich. In addition, exhibitions, special themed auctions and benefit auctions for charity as well as online auctions are regular events at Ketterer Kunst.Contact:Ketterer Kunst Joseph-Wild-Str. 18 81829 München GERMANY For press enquiries:Michaela Derra M.A. Telefon: +49-(0)89-55244-152 (Fax: -177) E-Mail: m.derra@kettererkunst.de For client enquiries:Tel. +49-(0)55244-444 Fax.: +49-(0)55244-177 E-mail: infomuenchen@kettererkunst.de www.kettererkunst.de