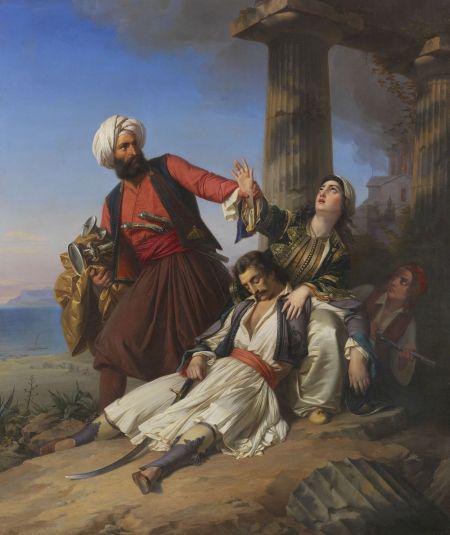 Munich, 4 December, 2017, (kk) – The auction of 19th Century Art marked the successful beginning of the autumn auction season at Ketterer Kunst in Munich with a total result of EUR 1.1 million*. The increasing appeal of this section was underlined by some 40% first time buyers and a sales quota of 80% by lots. A dramatic scene from the Greek War of Indepen-dence and several works by the salon painter Franz von Stuck were particularly sought-after.Top 5 No. 08: Paul Emil Jacobs – Szene aus dem Griechischen Freiheitskampf. Result EUR 103,750*, calling price: EUR 10,000 No. 52: Franz von Stuck – Dissonanz. Result EUR 93,750*, calling price: EUR 28,000 No. 21: Jan Chelminski – Große höfische Jagdgesellschaft. Result EUR 92,500*, calling price: EUR 19,000 No. 38: Julien Dupré – La Fenaison (Hay Harvest). Result EUR 55,000*, calling price: EUR 24,000 No. 04: Wilhelm von Kobell – Reiter vor München. Result EUR 40,000* calling price: EUR 12,000 No. 59: Franz von Stuck – Amazone. Result EUR 40,000*, calling price: EUR 15,000 Lot number 8, an oil painting by Paul Emil Jacobs, made for a brilliant beginning of the auction. Among the competitors for the “Scene from the Greek War of Independence” from 1841 were not only Greek art traders, but also a private collector from Canada on the phone. However, eventually an art lover from Greece in the saleroom was able to stop the bidding race with his bid of EUR 103,750 – more than a tenfold of the calling price. At the same time he set a new German record for a work by Paul Emil Jacobs. The list of desired objects also comprised several works by Franz von Stuck. As expected, the very popular motif “Dissonanz“ (lot 52) scored highest. A collector from Berlin made the depiction of the little Daphnis driving the faun next to him crazy with his pan flute sure for himself with his phone bid of EUR 93,750*, relegating several collectors from Bavaria, Brandenburg and North Rhine-Westphalia to places second and beyond. The bronze “Amazone“ (lot 59), on the contrary, will remain in Southern Germany. A private collector honored the work from 1897 with EUR 40.000*, enough to beat competitors from all over Germany, France and the USA. The atmosphere in the saleroom was filled with suspense when lot number 21, Jan Chelminki's oil painting “Große höfische Jagdgesellschaft” from 1877 was called up. In addition to half a dozen fellow countrymen of the artist on the phones, a good number of written bids and numerous online bidders came a full auction room. For the result of EUR 92,500*, almost five times the starting price, an art lover from North Rhine-Westphalia carried the trophy home. When Julien Dupré's “La Fenaison (Hay Harvest)“ (lot 38) was called up the moment for the American art enthusiasts had come to get involved. Accordingly, a New York trader was able to stand his grounds against fierce competition in the saleroom and particularly against a bidder from California. The popular motif of the haymaking farm girls will cross the ocean for a price of EUR 55,000*. All four works by Karl Hagemeister were not only sold with good price increases, they will also call Brandenburg, the artist's birthplace, their new homes. The array is led by the two oil paintings “Herbst III“ (lot 66) and “Meereswogen“ (lot 67), which climbed to results of EUR 35,000* and EUR 33,750* respectively.Sharp increases were also realized by the following:Lot 04, Wilhelm von Kobell (watercolor), Reiter vor München. Calling price EUR 12,000, result EUR 40,000* Lot 27, Wilhelm Busch (oil), Wiedensahler Bockmühle … Calling price EUR 8,000, result EUR 31,250* Lot 25, Carl Spitzweg (oil), Der strickende Soldat. Calling price EUR 18,000, result EUR 27,500* Lot 32, Adolph von Menzel (charcoal), Studie einer sitzenden Dame. Calling price EUR 9,000, result EUR 27,500*Unsold objects can be acquired in the post auction sale until 22 December, 2017. The result list is available by phone on +49-(0)89-552440.* The rounded result is the hammer price + 25 % surcharge for hammer prices up to EUR 500,000. The share of the hammer price that exceeds EUR 500,000 is subject to a commission of + 20 % added to the commission charged for the share up to EUR 500,000. ** Source: www.artprice.comSince it was founded in 1954, Ketterer Kunst has been on the forefront of auction houses dealing in Fine Art and Rare Books, with its headquarters in Munich, and a branch in Hamburg. Representatives' offices in Berlin, Heidelberg, Duesseldorf, the Benelux Union, France, Italy, Switzerland and the US have contributed substantially to the company's success. In addition, exhibitions, special thematic and charity auctions as well as monthly online auctions at www.ketterer-internet-auction.com are regular events at Ketterer Kunst. Robert Ketterer is the owner of Ketterer Kunst.Press inquiries: Ketterer Kunst Joseph-Wild-Str. 18 81829 München Michaela Derra M.A. Telefon: +49-(0)89-55244-152 Fax: +49-(0)89-55244-177 E-Mail: m.derra@kettererkunst.de Client inquiries:Ketterer Kunst Joseph-Wild-Str. 18 81829 München Tel. +49-(0)55244-444 Fax.: +49-(0)55244-177 E-mail: infomuenchen@kettererkunst.deFollow Ketterer Kunst on Instagram with behind the scenes pictures and news on auctions and events.

You can edit or delete your press release Ketterer Kunst Auction in Munich – 19th Century Art - EUR 103,750* for Freedom here

02-05-2019 | IT, New Media & Software
Archiware GmbH
Archiware delivers professional Archive and Backup for 1,000 EUR
Archiware GmbH, manufacturer of the media-focussed data management software suite Archiware P5, now offers the new, affordable P5 Desktop Edition. The new license bundle caters to small teams and single users willing to professionally archive their media. Director and DOP Anton Nelson showcases what the P5 Desktop Edition can do in a beautiful testimonial. Munich, February 4th, 2019 - Keeping media safe is crucial in media production – be it raw
10-30-2013 | IT, New Media & Software
Onlineprinters GmbH
onlineprinters.com invests more than EUR three million in production
New 8-colour offset printing press expands online print shop's capacity Neustadt an der Aisch, Germany – By investing more than EUR three million, Onlineprinters, the internationally operating online print shop, has expanded the production facilities at its German site. Extra offset printing capacity was added in September with the purchase of a new state-of-the-art 8-colour printing press, the Heidelberger Speedmaster XL 106-8P, including a new CTP system for digital printing plate
07-17-2012 | Health & Medicine
Otto Bock HealthCare GmbH
EUR 155,000 for Safe Zones Project
Eichsfeld Festival Attracts 25,000 Music Fans to Downtown Duderstadt "Tonight is going to rock!" It was with these words that initiators Professor Hans Georg Näder and Peter Maffay opened the 2012 Eichsfeld Festival this past Saturday. Around 25,000 music fans followed the invitation to experience top-class live performances in the Marktstraße of Duderstadt that day. Peter Maffay, Ich + Ich and four regional special guests did more than just wow the
01-18-2012 | Business, Economy, Finances, B …
Clariant International Ltd
Clariant successfully issues EUR 500 million Eurobond
Muttenz, January 17, 2012 – Today, Clariant successfully priced an Eurobond transaction of EUR 500 million with a tenor of 5 years, issued by Clariant Finance (Luxembourg) S.A. and guaranteed by Clariant Ltd. The fixed rate notes with a minimum denomination of EUR 100,000 and a final coupon of 5 ⅝ % p.a. are maturing on January 24, 2017. The orderbook was significantly oversubscribed on the back of strong investor demand.
12-10-2011 | IT, New Media & Software
VSHosting
VSCloud – cloud services from 0.78 EUR per day
On 15th of August, at a press conference, the unique cloud project named VSCloud was presented which provides cloud services of IaaS (Infrastructure as a Service) type. After three months, VSCloud can boast with hundreds of active users mainly from the Czech Republic and Slovakia. The leadership of VSCloud foresees that the number of first thousand active users will be surpassed by the end of this year. What are the advantages
02-08-2008 | Energy & Environment
Continuing Education Center der TU Wien
“Die Presse” Scholarship in the amount of EUR 15000
MSc Program Environmental Technology and International Affairs The shortage of environmental resources and the dealing with pollution are challenges which the international society of the 21st century has to face. Climate change, water shortage and air pollution are only some of the problems which have to be solved. The purpose of a sustainable development can be reached only if decision makers dispose of a comprehensive education. The cooperation between the Vienna University
Comments about openPR
I can't but agree to the positive statements about your portal: easy to use, clear layout, very good search function, and quick editing!
Jens O'Brien, Borgmeier Media Communication