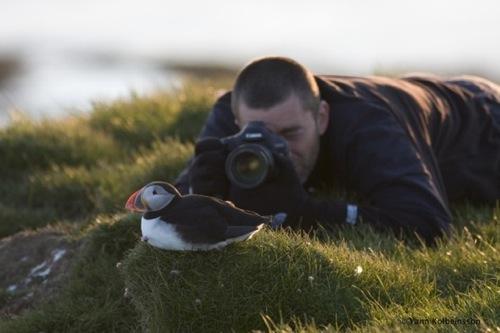 An old legend of the siblings gyrfalcon and ptarmigan, myriads of Brunnich's guillemots and puffins in black seacliffs, the melancholic cry of the great northern diver, wriggling groups of busy waders in their summerdresses, the magnificent dives of gannets and one of the greatest and most varied breeding grounds of ducks in the world. Those are examples of experiences bird watchers can expect on a new bird trail now being develeloped in North Iceland. More species of ducks breed at Lake Myvatn in North Iceland than anywhere else in the world and the lake has long been a popular travel destination among bird watchers. Fewer know however that there are a great number of other places in North Iceland to watch the artic bird fauna of Iceland. A new arctic bird trail, focusing on the coast of North Iceland, is now being developed by the regional development agency in the area, in collaboration with tourism service providers. The project is part of a national effort among service providers and governmental agencies to introduce international tourists to possibilities of bird watching in Iceland and to attract more bird watchers to Iceland. Raudinupur (Red Cliff) is an ancient volcano protruding 73 m out of the surrounding plain of Melrakkasletta peninsula. It has served as an important landmark for sea-farers through the centuries. The cliff and the surrounding area is rich with bird life and those who ascend it are offered great panoramic views. Raudinupur is among destinations on the new bird trail. The artic tern aggressively greets every guest heading to Raudinupur. The ptarmigan quietly sneaks between the tussocks with its many chicks and tries not to draw the attention of the gyrfalcon which frequently watched the bird life from the edge of the crater. An old Icelandic legend has it that the gyrfalcon and ptarmigan are siblings, but a spell was cast on the falcon not to recognize the ptarmigan as his sister, until he eats her heart, and then he cries. At Raudinupur, bird watchers will also see all the black birds of Iceland: Brünnich's guillemot, guillemot, razorbilled auk, black guillemot, puffin and on occasion one will spot the highly artic species of little auk, though it does not breed in Iceland. Other common birds in the cliff are fulmar and kittiwake. Two pillars rise from the sea, close to the cliff. Those are breeding grounds of gannet, queen of the sea. In development of the North Iceland bird trail, emphasis has been put on improving access to bird watching places and to publish information material, on signs and in booklets. Tourists in the area can choose from diverse accommodation and other services. As an example, the town of Husavik is a center of whale watching tours, in which there is a good chance to spot a blue whale. Due to the current favourable exchange rate of the Icelandic currency, travelling to Iceland has never been more economical. Iceland is closer than many think and flight time from London is as short as 3 hours. There are direct daily flights to Iceland from Europe, UK, US and Canada with Icelandair and Iceland Express. Frequent scheduled flights and buses run daily between the capital of Reykjavik and Northern Iceland. Gavia Travel (www.gaviatravel.com) is a ground tour operator in Iceland specializing in Nature and Wildlife. All tours are designed and guided by a team of experts. For further information, please contact: Hrafn Svavarsson, Managing Director gavia@gaviatravel.com Tel: +354 511 3939 Gavia Travel Alfaheidi 44 IS-200 Kopavogur Iceland Hrafn Svavarsson, Managing Director gavia@gaviatravel.com Tel: +354 511 3939 http://www.gaviatravel.com ------------------------------------ http://www.heritagedestination.com http://www.heritagedestination.co.uk

03-04-2019 | IT, New Media & Software
Internoc24 LLC
Internoc24.HOST launching affordable Iceland Dedicated Server
Internoc24.HOST, a leading provider for international Offshore Hosting Solutions, today took another step towards becoming one of the world's most recognized and preferred Offshore Hosting brands, launching Iceland Dedicated Server Offer within the next couple of weeks. The new server offers in Iceland should assemble the already established offshore locations of Internoc24.HOST in Romania, Russia and the Netherlands. Milos Slatjovic from the management team of Internoc24.Host said Iceland has been known for some
07-21-2009 | Politics, Law & Society
LYMEC - European Liberal Youth
Iceland: In from the cold
On Friday the Republic of Iceland handed in an application to join the European Union to the Swedish EU presidency. Iceland's parliament last week had backed the government's plan to begin talks to join the EU, months after a meltdown of the north Atlantic island's economy amid the global financial crisis. LYMEC President Aloys Rigaut reacted: 'Iceland is one of Europe's oldest democracies and we can thus only welcome its EU
02-25-2008 | Business, Economy, Finances, B …
Kaupthing Bank
Iceland Economic Outlook for Q1 2008
Cooler times ahead The state of the Icelandic economy has altered since our last forecast, after the deepening of the sub-prime crisis on the international markets. The economy is more cooling down, opening up the possibility that the Central Bank of Iceland will cut interest rates sooner than previously forecast. Highlights of the forecast: - Economic growth in 2008 will be low due to decreasing private consumption and fewer investments.
12-20-2007 | Business, Economy, Finances, B …
Kaupthing Bank
Iceland - Commercial property market
After sharp increases in commercial property prices last year, the market will grow calmer next year. A cool down in the economy, high interest rates and a vast increase in supply will lead to a slowdown in activity. Growth in service sector - higher concentration of property in the Reykjavik area and both new and old core areas have been growing. There are signs of a slowdown in demand in
12-03-2007 | Business, Economy, Finances, B …
Kaupthing Bank
Iceland: Real estate market at crossroads
Housing prices will continue to rise over the coming years. The pace of these rises, however, will slow down considerably. High interest rates, tighter access to loans and a cooling labour market are the factors that will reduce demand. Supply, on the other hand, seems to have peaked and is likely to diminish over the next years – which should help stabilise real estate prices. A turn-around is expected in
11-29-2007 | Tourism, Cars, Traffic
Iceland Express
Iceland Express adds flights
Iceland Express has today announced that it will add extra flights on the London Stansted to Kefalavik route, starting on 26. February 2008. From that date this dynamic, young airline will operate 11 flights per week on this route, an increase of two flights a week on the summer programme. London Stansted to Reykjavik was one of two original routes the airline has flown since it commenced operations in February
Comments about openPR
OpenPR ist the nicest and most clearly laid out PR platform I have seen to this day. The press releases are displayed very nicely and clearly and without any unnecessary frills. The updates are fast and the finished release looks appealing and is clearly legible. Even with 16 years of experience one discovers new things from time to time. Congratulations!
Gabriele Ketterl, Director Marketing & PR, Menads