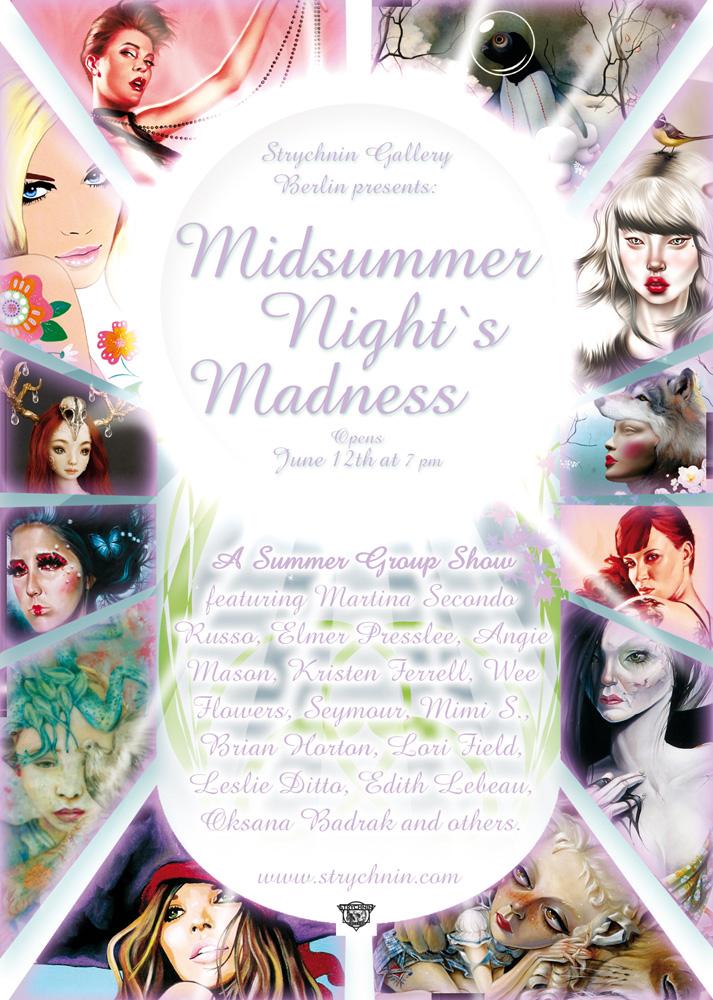 "If we spirits have offended, think but this and all is mended: that you have but slumbered here, while these visions did appear. And this weak and idle theme, no more yielding but a dream.” A summer group show featuring Brian Horton, Mimi S., Leslie Ditto, Marina Bychkova, Edith Lebeau, Martina Secondo Russo, Elmer Presslee, Angie Mason, Kristen Ferrell, Seymour, Wee Flowers, Oksana Badrak, Lori Field and others. Opens June 12th at 7 p.m. Right in time for summer solstice, Strychnin Gallery presents a light and beautiful group show featuring works by over ten internationally renowned artists. Creatures straight out of fairytales, goblins and fauns that made it into the digital age (works by Badrak or Mimi S.) and inhabit the dreams and nightmares of our childhood like in Mason’s and Ferrell’s work, are having a jolly get-together in our exhibition rooms. Strychnin Gallery invites you to a White Night in the wake of the longest night of the year but let us not forget that the sun will shortly reach its zenith and Strychnin owner Yasha Young is already preparing us for fall and winter with this carefully curated exhibition. MIDSUMMER NIGHT'S MADNESS – A Summer Group Show Runs until: July 5th 2009 Opening hours: Thu & Sun from 1 p.m. – 6 p.m., Fri & Sat. from 1 p.m. - 7 p.m. With galleries in three bustling hotspots – New York City, Berlin, and London – Strychnin Gallery is a playground for artists from all around the globe. It is a place where collaboration is encouraged, new projects are constantly developed and creativity is the one and only thing that truly counts. Owned by charismatic curator Yasha Young, Strychnin is dedicated to presenting emerging American artists to the European art world and vice versa. It features a variety of artists with particular individual styles rather than artists belonging to a collective “hip” movement. If you insist on putting a label on them, try lowbrow turned highbrow, pop surrealism or fantastic realism among others. Founded in Brooklyn in 1998, the gallery opened a European showroom in Berlin in 2002. The US gallery has since moved to a location in Manhattan’s Chelsea district, opening with a group show featuring over 70 artists in October of 2006. Strychnin Gallery opened a third location in East London’s vibrant art scene right off of Brick Lane in October 2007. The gallery participates in major international art fairs on a regular basis, including Bridge Art Fair, Liste, or Art21 in Cologne, which appointed gallery owner Yasha Young to its selection committee in 2008. Strychnin Gallery Boxhagenerstr. 36 10245 Berlin www.strychnin.com PR Kontakt: Iris Bitter pr@strychnin.com

08-15-2018 | Advertising, Media Consulting, …
APICS-NORS
APICS Top Management Night
APICS’ Northern Sierra Chapter Presents Top Management Night Reno, Nevada – The Northern Sierra Chapter of APICS, the association for supply chain management, is pleased to announce its annual Top Management Night will take place on October 16th on the campus of the University of Nevada at the Basin Street Club at Mackay Stadium. The event will feature speakers Ryan Martin of ITS Logistics and Kevin Ciccotti of the Human Factor
03-26-2018 | Advertising, Media Consulting, …
salam studios & stores
MONTBLANC LEGEND NIGHT
The Montblanc legacy For over 100 years, Montblanc has designed long lasting and essential accessories, writing instruments, watches and leather goods. Its products are timeless: a Meisterstück is still an eternal pledge, as Montblanc Augmented Paper is a companion on the path towards the future. In 2011, a new chapter opened in the history of the Maison, when it launched the Legend fragrance. Montblanc Legend has won its reputation thanks to its
03-14-2017 | Business, Economy, Finances, B …
Global Industry Report
Global Infrared Night Vision Goggles Market 2017 - NIGHT OPTICS, Morovision, Meo …
The Infrared Night Vision Goggles market research report distils the most essential aspects of the market and presents them in the form of a comprehensive and cohesive document. The findings of this report have been obtained via a balanced mix of both primary and secondary research. Interviews of C-level executives in the Infrared Night Vision Goggles market form a chunk of the qualitative analysis contained in this report. To begin
02-24-2017 | Arts & Culture
Image Unlimited
Late-Night Treats for Late-Night Peeps
WHAT: La Motta’s, the neighborhood favorite in Boston’s SoWa District, is rolling out the late-night red carpet for its hospitality industry folks and friends, with Chef de Cuisine Justin Winter’s creative twists on after-hours snacks. Available every Sunday - Thursday from 10:00PM to last call, La Motta’s is the neighborhood joint for a late-night bash with flavorful bites and brews. Launching Sunday, February 26th, 2017, guests can expect flavorful options
09-02-2016 | Fashion, Lifestyle, Trends
LG FOOD SERVICE Ltd
Food Experience Night
Brave or hesitant? Adventure lovers or lovers of tradition? Are you ready to get in the game? It’s not just a drink, not only a taste, not the usual party, but we bring all these things together to create an original and explosive results. Food Experience brings to London the beloved Italian cuisine in a new look! The flavors meet the aromas, the view engage the touch in a dance of the senses
04-07-2016 | Arts & Culture
BCAE
Terrarium and Wine Night
WHAT: Kick back and relax after a long week! On Friday, April 29, 2016 from 6:30PM to 8:30PM The Boston Center for Adult Education (BCAE) is hosting “Terrarium and Wine Night,” an evening dedicated to creatively “un-wine-ding.” From 6:30PM to 8:30PM, students will learn how to craft the perfect centerpiece, desk decoration or thoughtful homemade gift under the
Comments about openPR
OpenPR is clearly structured and remains true to its principle of confining itself to the essential parts. OpenPR has proven to be a very good and reliable partner to our media agency: Within the shortest time the releases are online and go down well with the media representatives. The success of OpenPR is reflected in the steadily increasing number of press releases. It is good that OpenPR exists!
Ursula Koslik, Director Marketing & PR, F+W Hamburg