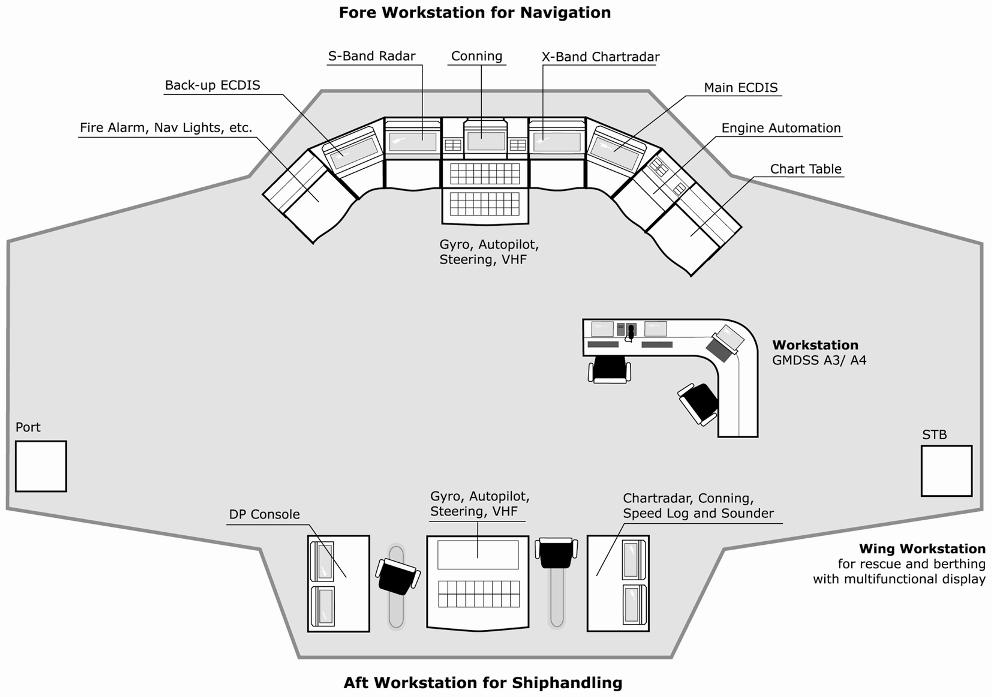 Example of a typical bridge design with fore and aft workstation according to DNV NAUT-OSV.

In May 2009, BOA Offshore AS will take over their latest newbuilding BOA GALATEA. The new vessel is a sister ship of BOA THALASSA, which has started operation in December 2008. Both ships are equipped with Integrated Bridge Systems, which offer highest standards of safety according to the rules of DNV NAUT-OSV.When Bergen Group Fosen shipyard delivers its newbuilding number 80 to BOA Offshore AS, M/S BOA GALATEA will be one of the most modern vessels entering the Norwegian offshore industry. The Seismic Research Vessel will start operation for Electromagnetic Geoservices (EMGS), who has chartered the vessel in order to carry out extensive seabed logging operations for oil and gas exploration companies. Designed for operation under harshest environmental conditions, BOA GALATEA is like its sister vessel BOA THALASSA compliant to DNV NAUT-OSV notation. This classification rule lists specific requirements for Offshore Supply Vessels and includes unique features regarding bridge layout and navigation system, which have become a synonym for highest standard to ensure safe navigation. On board of the vessels, Syberg AS has installed the Integrated Bridge System from Raytheon Anschütz, which totally complies with these requirements. “The navigation system of this vessel is an excellent example of how an Integrated Bridge System should be designed”, says Jörn Fischbach, Raytheon Anschütz’ Sales Manager for Norway. “It offers a standardised user interface, standardised data management and centralised navigation alert handling. These features are key aspects for improvement of safety and ease of operation and will be required by IMO’s upcoming INS performance standards. This can only be fulfilled satisfactory when the core functions like radar and ECDIS are part of an integrated solution from one single manufacturer.”The most obvious feature of the DNV NAUT-OSV classification is the special bridge layout. It is well known that modern bridge systems are already designed to follow ergonomic considerations regarding the arrangement of working places, the instrumentation and the operability of the equipment itself. But the bridge system of an Offshore Supply Vessel comes with the special arrangement of a fore bridge and, in addition, a fully operational aft bridge. While the fore bridge is fitted with all required functions for the ship’s navigation, the aft bridge is used for ship handling when close to platforms or performing special tasks like anchor handling, diving operation or deep sea construction work. It is the most commonly used working place during offshore operation. Thus, the aft bridge has to combine all important controls, including the DP-system, full engine controls and crane and winch controls as well as conning, chart radar and navigation sensor presentation. The proper arrangement of navigation instruments including bidirectional alarm handling has to be individually determined in agreement with the shipowner in order to ensure the most ergonomic design for the officers. From January 2011, the new Performance Standards for Integrated Navigation Systems will require the installation of multifunctional workstations which meet the demanding offshore specific requirements and provide highest level of integration.Regarding the ship’s navigation equipment, DNV NAUT-OSV requires one radar to be a chart radar. The chart radar shall receive ECDIS route information and display the active route. In addition, a redundant gyro compass system is required by the DP-class. Furthermore, the DNV NAUT-OSV notation requires a central alarm system to collect, display and mute all navigation and communication alarms at any position on the integrated bridge.Chart radar presents ECDIS information in the PPI to indicate where the ship is located with respect to shore lines, shallow water areas and traffic separation zones. Thus, the interpretation of the radar image becomes easier and contributes to a reduced stress level during offshore operations. When underway, chart radar increases operational safety. For example, during evasive action it is not only important to know, if the new course fits into traffic situation, but also whether the water depth is sufficient for the vessel. For this situation, modern radar systems also offer an integrated autopilot function, which enables the navigator to change the course of the ship while he can keep the radar in view. The integration of an override tiller will allow steering with any rudder angle in the event of an emergency. While the Norwegian offshore industry already has a long experience with gyro compasses and steering systems from Raytheon Anschütz, the company has now strengthened its position on the market for integrated bridge systems. Jörn Fischbach explains: “Last year we were awarded the supply of a series of nine Integrated Bridge Systems to BOA Offshore. Four new Multi Purpose Supply Vessels and four Anchor Handling Tug Supply Vessels will be equipped with Raytheon Anschütz most modern navigational systems. The strong and competent support of our exclusive distributor Syberg and their network of 20 local service stations along the Norwegian coast line have proven a most successful mix and rewards us with repetitive business. Raytheon Anschütz and Syberg are most committed to fulfil our customer’s demanding requirements, what means to ensure safe navigation and ship handling also in the harshest deep sea environment encountered.”Raytheon Anschütz has delivered more than 600 customized Integrated Bridge Systems for commercial and naval ships as well as for demanding offshore applications. The company has a broad range of own products, which covers e.g. gyro compasses, autopilots and steering control systems, radars and electronic sea charts (ECDIS). All activities such as R&D, system engineering, production, sales and service are concentrated at one location. Raytheon Anschütz cares for its systems on board of more than 25,000 vessels worldwide and maintains a service network with more than 200 service stations alongside the most important shipping routes of the world. Raytheon Anschütz is a subsidiary of the Raytheon Company (USA) and belongs to its Integrated Defense Systems division. Raytheon Anschütz was founded as Anschütz & Co. in 1905 and employs today more than 500 people at its headquarter in Kiel, Germany.Raytheon Anschütz GmbH Zeyestr. 16-24 D-24106 Kiel Germanywww.raytheon-anschuetz.comPress Contact: Martin Richter Marketing Support Manager Tel.: +49 431 3019 712 Fax: +49 431 3019 94712 E-Mail: martin_richter@raykiel.com