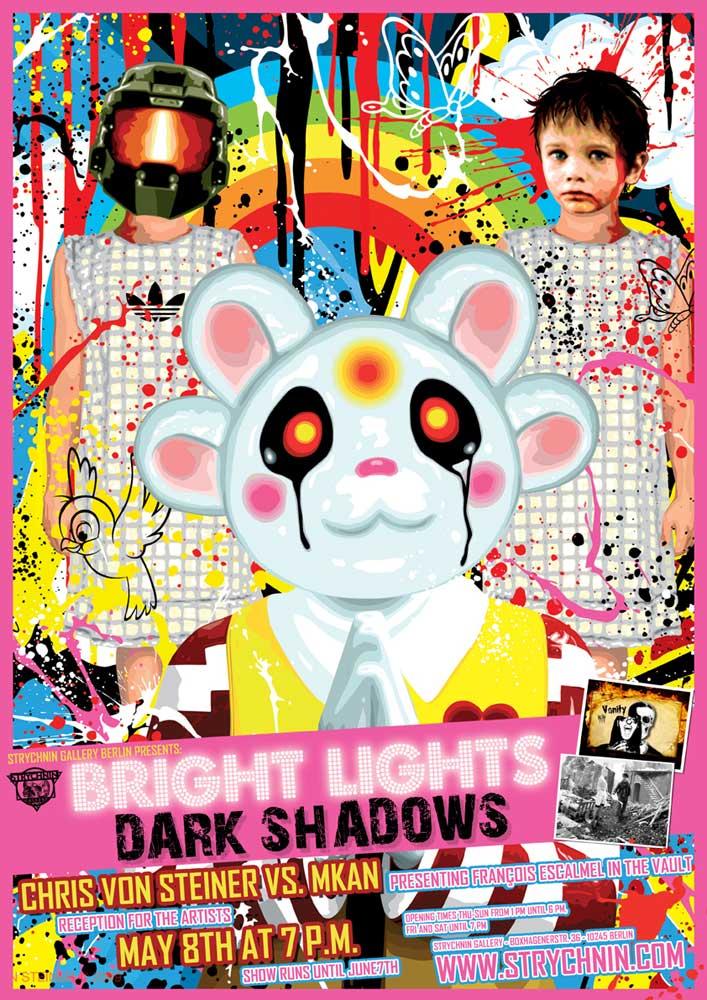 Chris von Steiner's pop images are ultimately too disturbing to be cute. Rather, they bring out darker memories of childhood.

Opens May 8th at 7 pm – runs until June 7th. “Childhood is commonly regarded as the happiest time of human life. Growing up into adulthood however, we tend to forget that childhood is also a world of fears, tears, nightmares, drama and violence. So many seemingly insignificant events, traumatic in nature, shape us into the current version of our selves: Under the bright lights of childhood grow the seeds of our lives’ dark shadows. Good or bad, angel or devil, we are all essentially the same: Peter Pan forever bound to an unending, inescapable childhood experience. These are the themes I have attempted to explore with this new series of work entitled Bright Lights – Dark Shadows.” – Chris von Steiner Welcome to the world of French visual artist Chris von Steiner. Using his fantasies, dreams and desires, von Steiner creates digital fairytales out of the stories he grew up with, stories that have since turned into eerie tales of passion, fear, loneliness, pride, innocence and hope. Combining the pop icons of his youth with bold colors, elements from movies, music, books, and television, Chris von Steiner’s digital paintings have a haunting familiarity right upon first sight. Like a pop song touching your heart and sticking in your mind, von Steiner’s works invade your memory and stir up tales you can get lost in. He has exhibited all over Europe and the USA; this is his second exhibition at Strychnin Gallery Berlin. Showing in Berlin for the first time will be French artist MKan. Through personal mythology and metaphoric language, MKan has created a family of strange allegorical characters in his own image. Their metamorphoses make them ridiculous, sending each one back to his respective archetypal universe where violence reigns as the absolute king. With the nose of a black clown, they claim a complete state of entertainment, auto-mockery, and the absurd. It is thus a self-centered universe, always ironic and marked by unrefined codes, that MKan advances in – welcome to the Jungle Camp! Also presenting “Free from Slavery” – New works by François Escalmel in The Vault. The Vault is Strychnin’s back room that is reserved for special exhibitions Canadian artist François Escalmel primarily deals with aspects of identity and all questions related to this topic. Communication, love, isolation, role models, the value of artistic endeavor and the place of the individual within a group, all these are topics his latest series of works have explored through different metaphors. Working in photography, painting, and digital drawing, Escalmel also writes poetry and uses it as the foundation of his visual works, sometimes mixing in words. He often appears in the works himself, whether it is in the form of self-portraits or as a character inserted into photographs of miniature sets in post-production on the computer. Alongside images from popular culture, such as actors from movies or contemporary fashion, he is influenced by Naturalism and the notion of “artifact”- false old documents that evoke a turn in mentalities in some imaginary time and place. Opens: May 8th 2009, 7 p.m. Chris von Steiner and MKan will be present for the occasion! Runs until: June7th 2009 Opening hours: Thu- Sun from 1 p.m. – 6 p.m., Fri and Sat. until 7 p.m. With galleries in three bustling hotspots – New York City, Berlin, and London – Strychnin Gallery is a playground for artists from all around the globe. It is a place where collaboration is encouraged, new projects are constantly developed and creativity is the one and only thing that truly counts. Owned by charismatic curator Yasha Young, Strychnin is dedicated to presenting emerging American artists to the European art world and vice versa. It features a variety of artists with particular individual styles rather than artists belonging to a collective “hip” movement. If you insist on putting a label on them, try lowbrow turned highbrow, pop surrealism or fantastic realism among others. Founded in Brooklyn in 1998, the gallery opened a European showroom in Berlin in 2002. The US gallery has since moved to a location in Manhattan’s Chelsea district, opening with a group show featuring over 70 artists in October of 2006. Strychnin Gallery opened a third location in East London’s vibrant art scene right off of Brick Lane in October 2007. The gallery participates in major international art fairs on a regular basis, including Bridge Art Fair, Liste, or Art21 in Cologne, which appointed gallery owner Yasha Young to its selection committee in 2008. Strychnin Gallery Boxhagenerstr. 36 10245 Berlin www.strychnin.com PR Contact: Iris Bitter production@strychnin.com