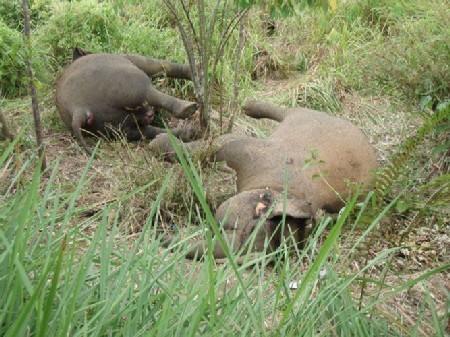 Elephant and Tiger poaching in Sumatera get more rampant. ProFauna Indonesia, a wildlife protection organization in Indonesia, records the recent deaths of two female elephants named Gia and Paula in the Center of Elephant Conservation (PKG) in Seblat, Bengkulu, and Sumatera on 23rd March 2009. The two mammals died after being shot in their heads. Ironically, in Gia’s head was found a bullet which damaged her brain and caused severe bleeding. The elephant killing in the area of the Center (PKG) of Seblat, Bengkulu was not the first time. Between 2004 and 2007, ProFauna found that at least seven elephants killed in the center. On 17th July 2007, a male elephant named Pratama was killed brutally, his head crashed and his ivory tusks gone. Ironically, the perpetrators have not been revealed until now. In addition to elephant poaching, the most poached endangered animal is the Sumateran Tiger (Panthera tigris sumatrae). According to ProFauna’s survey in March 2009, 12 tiger snares were found by the Center of Elephant Conservation (PKG) of Seblat, Bengkulu. On 19th April 2007, a Bornean Clouded Leopard was trapped by one of these tiger snares. The authority had found the suspect but the law was not enforced. The wildlife poaching in the center in Seblat is further fuelled by the new road next to Air Sabai region. The road was built by loggers and is now used by a palm oil company to transport their harvest. The road facilitates poachers and hunters to do their illegal hunting on tigers and elephants as well as other wildlife. Elephant and tiger poaching in Bengkulu threat the protected animals and bring them towards extinction. “Police must fully enforce the law of the wildlife crime in Bengkulu. Without law enforcement, elephant and tiger poaching in Bengkulu will keep going on”, Radius Nursidi, ProFauna representative in Bengkulu stated. ProFauna also demands the government and authorities including police and military forces to work together in tackling the poaching and trading of wild animals in Bengkulu. It is alleged that some of their officers commit the wildlife crime. In fact, the law is clearly stated that to poach and trade protected species is against the law and the offenders are liable to a maximum five year prison term and 100 millions IDR (10,000 USD) fine. If it is fully enforced, ProFauna believes that it will deter any wildlife crime. ### - ProFauna Indonesia (www.profauna.org) is w wildlife protection organization in Indonesia established since 1994. With support from its members and supporters all over the country, ProFauna works through campaign, education, investigation, and animal rescue. - For further information please contact: Butet A. Sitohang, International Communication Officer, email: international@profauna.org , mobile: +6281333899741 ProFauna Indonesia Jl Raya Candi II / 179 Malang, Jawa Timur - Indonesia +6281333899741